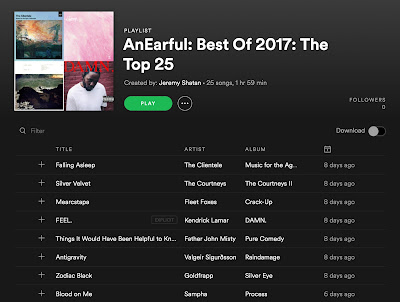 I probably say a variation of this every year, but my Top 25 records are not the only “bests” of the year - you’ll find plenty more on the genre-specific lists that follow over the coming weeks - but these are the ones that got me THROUGH or enhanced my days, becoming the soundtrack of my life. If you’ve been following along, you’ll notice that I expanded my list to 25 from 20 this year (it used to be 10!). This is due both to the nearly overwhelming amount of great music that came out this year and to the need to more accurately reflect the breadth of my listening. Who knows what next year will bring?


1. The Clientele - Music For The Age Of Miracles In the absence of actual miracles, this surprising return to form made for a delightful substitute.

2. The Courtneys - II That there is profundity in extreme minimalism was never clearer than on this sleek sophomore album. There was also no better road-trip record, which I needed for year two of college tours.

3. Fleet Foxes - Crack-Up In ancient times, poetry and music were deeply integrated disciplines. Robin Pecknold, the singer, songwriter, and heart of Fleet Foxes, is that kind of musician and poet and words and sounds are intertwined on this third album to an even further degree than on their first two. Considering that Crack-Up was made after an hiatus of several years, during which time Pecknold attended Columbia University, it’s not surprising that it is also their most literary album. The lyrics are deeply allusive (even the title is a nod to F. Scott Fitzgerald) but still manage to come from a very personal place. Third Of May/Odaigahara, the first single, is a perfect example, with Pecknold’s fear and sadness over strains in his friendship with bandmate Skyler Sjelset transmuted into something elevated and universal.

“Can I be light and free?/If I lead you through the fury will you call to me?/And is all that I might owe you carved on ivory?” Pecknold sings over soaring stings and guitars, after a hushed moment of introspection that uses a different sound to represent an older perspective on the white-hot emotions surrounding a breach in the relationship. In his wonderful annotations of the lyrics on Genius he translates that last line as “Are our obligations to one another as outmoded and in-the-past as fuckin' scrimshaw bro,” which gives an idea of the alchemy of his writing.

The slash in the title of the song was also a hint of its suite-like structure, which is something they employ on several songs, stretching their compositional muscles towards realms of prog-folk or even art song, making for a richly involving listen that retains its mystery over time. It also makes the shorter, more direct songs like If You Need To, Keep Time On Me even more stunning, as they stand out from the thickets of changes in tempo and timbre.

If I was going to find any nits to pick with Pecknold & co., it might be to question the choice of including a brief sample of a Mulatu Astatke track at the end of On Any Other Ocean (January- June) which just doesn’t fit and wrenches you out of the enveloping world of Crack-Up. On the double-vinyl version, it hangs off the end of side three quite awkwardly. I won’t belabor the point as it is such a short excerpt, but they should feel no need to establish hipster-cred by telling us they’re fans of Ethiopian jazz - that’s what Spotify playlists are for! I could also wonder why they muted some of their power, which can be explosive in concert, leading to a less dynamic experience than what might have been. I was lucky enough to see them twice this year (once in the tiny confines of Electric Lady Studios) and feel that massed blast in person. Aside from those minor quibbles, this was a glorious return. Long may they reign.

4. Kendrick Lamar - DAMN. No one in hip hop - or anywhere else, for that matter - limns our present moment the way he does. Shame about that album cover, though!

5. Father John Misty - Pure Comedy The good father and production partner Jonathan Wilson turn in their most ambitious epic yet on this deceptively futuristic masterpiece.

6. Nordic Affect - Raindamage Perhaps Björk wouldn’t find herself in such a cul de sac if she went home and worked with these Icelandic geniuses of texture, precision and thorny wildness. But guess what? They’re doing more than fine on their own.

7. Goldfrapp - Silver Eye Call it a back to basics album if you like, but there’s nothing basic about their addictive glam-electro beats and dubbed out ambient tone poems - and no one does it better.

8. Sampha - Process  Long a secret weapon for many hip hop and R&B stars, this quadruple-threat (singer, songwriter, musician and producer) finally steps out on his own, delivering a stunningly versatile collection of songs that show off a uniquely muscular vulnerability.

9. Jenny O. - Peace And Information A songwriter in the classic mode, Jenny’s sophomore album was as immediate as a status update and as solid as the vintage Detroit steel she likes to drive. Producer Jonathan Wilson helped her push into new territory, with an extra edge here or a Latin groove there, and her singing was better than ever.

10. Noveller - A Pink Sunset For No One Sarah Lipstate does things with multiple layers of electric guitars that Les Paul never would’ve imagined. On her latest album she also buckled down on song structure, building tension and dynamics into every track. She’s been doing this for a long time and this is a perfect entry point into her magical world.

11. Del Sol String Quartet - Terry Riley: Dark Queen Mantra The title piece, written by Riley for string quartet and his son Gyan’s guitar, is a new highlight in the already consequential career of a true American original. The accompanying works do nothing to break the spell.

12. Nev Cottee - Broken Flowers Every note counts on this epic of badass enervation (trust me) led by Cottee’s sepulchral croon. It’s an enveloping record, like a warm but slightly scratchy blanket, and inspiring in Cottee’s commitment to his singular vision of starlit folk-rock.

13. Boogarins - Desvio Onirico (Live 2016) and Lá Vem A Morte These boys from Brazil have been deepening their sound both on stage and in the studio and both sides are represented in their 2017 releases. The live album features four exploratory cuts, three from their first two albums and one improvised on the spot - it’s a trip and a half as they refuse to play it safe in front of ecstatic crowds. Lá Vem is a psychedelic tapestry, with songs blending into instrumental fragments and back again, a journey of quite a different nature than the live jams, but a journey nonetheless.

14. Elsa Hewitt - Cameras From Mars This is really a stand-in for all three excellent albums Hewitt released this year, spanning electro-pop, ambient and collage-like sounds. While she’s new on the electronic scene, she has been honing her craft as a songwriter and producer for nearly a decade. Give it a try and if you like what you hear, support her Pledge campaign to get downloads, vinyl and cassettes of her handcrafted sonics. Maybe if we show her enough love from the States, she'll travel from England to play in New York!

15. Nadia Reid - Preservation This New Zealand singer-songwriter might as well have called her gorgeous sophomore effort “Self-Preservation,” as she navigates life after a breakup with a spine steeled by nothing but her gift for indelible melodies and lyrics full of poetic leaps. The production is well-nigh perfect, pushing her folky songs into the indie-rock mystic. But it’s her songs and remarkable voice which are the stars here, as she proved at the start of her NYC debut show at Park Church Co-Op earlier this month. The way she walked up on stage without a word and, accompanied only by her guitar, just poured out her voice flawlessly was jaw-dropping. A house of worship instantly became an entirely appropriate place for her to work her magic. Preservation is a treasure you need in your collection.

16. Spoon - Hot Thoughts America’s longest living rock band continues to find ways to add new twists while still sounding utterly like themselves. While Britt Daniel’s gritty voice and gnarled guitar are at the forefront, everybody pulls their weight, especially beat-master Jim Eno who always makes sure the rhythms are up to the minute and intensely satisfying.

17. Nicole Atkins - Goodnight Rhonda Lee In which the tough dame from south Jersey masters all types of American classicism, from soul to country and even disco.

19. Novella - Change Of State According to Spotify, the genre I listened to the most in 2017 was “Chamber Psych” and this elegant ensemble may be mostly responsible for that. Like The Courtneys, Novella tightened up their songwriting, focused their arrangements, and came up with an end-to-end classic.

20. Michael Chapman - 50 This Brit-folk legend celebrated a half-century in music (and his 75th birthday) by heading into the studio with a posse of young American folk-rock virtuosos led by Steve Gunn and laying down new songs and remakes, resulting in a woody tapestry of hard-luck ballads and tall tales that was consistently gripping. His voice may be a dry husk of its former self but, boy, does he know how to sing.

21. Hiss Golden Messenger - Hallelujah Anyhow While this might be a lighter-weight entry in M.C. Taylor’s catalog, goddamn if his richly textured Americana didn’t just feel good. And no record released this year was more appropriate for a midnight drive through Pennsylvania’s Allegheny tunnels - just one of the ways he kept me steady at the wheel. Hallelujah!

22. This Is The Kit - Moonshine Freeze Nearly a decade in, Kate Stables (who is TITK, along with whoever else she brings in) finally connects songs, sounds and singing in a way that goes beyond the merely interesting and becomes essential. So many songs on the album have the incantatory power of ancient tunes that it wouldn’t surprise me if she had found them buried in the woods near King Arthur’s grave. But it’s really all her, as she comes into her own with newfound confidence and mastery. You can practically see it happen in her wonderful Tiny Desk Concert and I hope to see it in person when she hits Rough Trade NYC on May 23rd, 2018.

23. Warhaus - Warhaus For his second album as Warhaus, burgeoning Belgian icon Maarten Devoldere smooths our his approach slightly but the choruses are as catchy as ever, the sound world is still a unique blend of cabaret sleaze, noir jazz and Dylanesque snarl and the tang of unfiltered Gauloises hangs in the air. In short, atmospheric.

24. Novelty Daughter - Inertia There’s nothing inert about Faith Harding’s dense beats and next-level electronics, especially when her glorious voice takes off over the top. While her musical approach is elevated and complex, her lyrics are full of plain truths and relatable issues. Making music helps her deal - listening to Novelty Daughter does the same for me.

25. Michael Head & The Red Elastic Band - Adiós Señor Pussycat The guitars jangle, the melodies are classic, and the sense of opportunity seized is palpable throughout this roaring comeback from one of England’s best kept secrets. No one saw this coming - even him, maybe - and it’s pure heartfelt sing-along joy.

Listen to tracks from all of these albums in the playlist below, except for the live album by Boogarins (buy it on Bandcamp for $4.20 - get it?), and then follow through on the sounds that intrigue you. Let me know if I've helped you find something new!