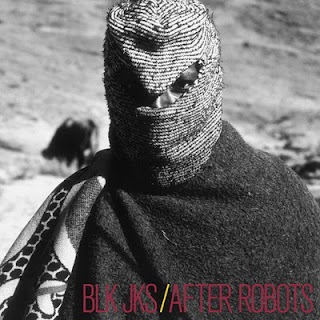 Back in December 2008 I promised my brother-in-law (and myself) that I would finally launch this blog in 2009. So here it is, just under the wire: anearful about music, popular culture and whatever else is on my mind. And what better way to launch this blog than with a look back at 2009?

1. BLK JKS/After Robots - If the ability to astonish over and over again is not a prerequisite for greatness, maybe it should be. After hearing them live on WNYC's Soundcheck, I fell in love with their reverb-drenched EP, Mystery, and found myself slack-jawed at their titanic SXSW concert as broadcast on All Songs Considered. The album shows them taking their Hendrix-Dub-Prog-South African blend to a deeper, richer place. The brilliant horns add a new dimension and, while there is less reverb than on their debut, they still find ways to explode in tsunamis of sound that are nearly overwhelming, releasing the tension like a gun battle in a John Woo movie. Johannesburg spawned a monster. Download a free "Mystery Megamix" and get more background here

2. Patrick Watson/Wooden Arms - Watson shows a level of craft that is positively old-fashioned on this record. First, he writes songs with exquisite melodies and deep emotional connection. Then he constructs arrangements that hearken back to Kurt Weill and Tom Waits but with a gauzy warmth all his own. Finally, he and an array of expert accompanists pour their heart and soul into the gorgeously produced versions heard here. Not convinced? See and hear here and hear here.

3. Arctic Monkeys/Humbug - The young rock classicists expand their sound somewhat on their third album. Some songs are slower and more expansive and the influence of Alex Turner's foray into 60's pop (The Last Shadow Puppets) is clear. Not to fear, though, there's still plenty of the jagged post-punk funk that made their rep back in 2007. I know there were two producers and that one was Josh Homme of the fairly mediocre Queens Of The Stone Age. I know that some was recorded near the Joshua Tree monument and some in NYC. I read Mojo, so I know even more than that but all these details are ultimately irrelevant in the face of the immense pleasure found on Humbug. With the slow death and atomization of the Strokes (memo to Julian Casablancas: your "Phrazes" aren't catching), the Monkeys take their place as the best four person guitar group out there. Simply a great band - long may they reign. To catch up, view their "Web Transmission" here.

4. Mulatu Astatke & The Heliocentrics/Inspiration Information 3 - I first became aware of the wondrous world of Mulatu through a Studio 360 piece on the Either/Orchestra, who have devoted themselves to his music for the last few years. I downloaded the volume of Ethiopiques that features him and was sold. The sinuous melodies, Monk-like harmonies and stinging guitar licks are instantly enthralling when layered on the off-kilter rhythms that are somewhere between 60's pop and James Brown funk. This collection, part of a series of shotgun collaborations, pairs him with the Heliocentrics, a British eclectica band. Man, does it work. Funkier than a mosquiter's tweeter but not in any way that Ike Turner would recognize. Sympathetic drones underly some songs, gradually revealing themselves through the dub-informed production and occasionally a head-solo-head structure makes you think this is a jazz record. But it ain't - it's a one off, and the star is Mulatu's unique sound-world. Get some in your life today.

5. Holly Miranda/Sleep On Fire (EP) - Holly is my favorite new discovery this year and I owe it all to the New York Times. Somehow fascinated by this article (blame it on the TV On The Radio connection) I sought her music out online and became addicted to her MySpace page, which has a generous helping of music. I also found a link to the amazing Slow Burn Treason on Kanye West's blog and was able to feed my addiction on my iPod. I friended her on MySpace and sent her a message, offering to pay for Slow Burn Treason. I quickly realized I had a serious problem and then sought counseling. The prescription was more Holly Miranda so I eagerly purchased this EP, which came in a hand-addressed envelope. The personal touch is definitely part of the charm but Holly's music can more than stand up to the vicissitudes of the wider musical world. She creates a sound that is both tough and ethereal, like a wraith singing an Appalachian ballad on the dark side of the moon (Pink Floyd reference intentional) - and her songs have the sturdy underpinnings of old folk songs, solid structures for her to spin a universe of atmosphere and emotion around. The "album" I'm really celebrating here is self-made: my playlist that includes the EP, Slow Burn Treason, a couple of other tracks she was giving away free on her blog and her new single. Her full-length is due in February - expect it on my list, and many others, at the end of 2010.

6. Christopher Tignor/Core Memory Unwound - With a title like that, you would expect there to be a complex process behind this music and not a little compositional rigor. And you may be right. I prefer to just let myself be engulfed in the beauty of Tignor's lush yet spare sounds, a grand-nephew of Brian Eno's On Land or Discreet Music. It's ambient but rewards careful attention as well. This is an album for the first hour of work if there ever was one. I just learned that Tignor is the musical director of a group called Slow Six so there is more to explore, including a new album coming out on January 26.

7. Vieux Farka Toure/Fondo - What I heard of his debut was tentative and firmly in his father's shadow. When your father is Ali Farka Toure, that's perfectly understandable but while I could sympathize (and even relate) to his father issues, it did not make me want to buy or hear the record. Fondo is another story entirely. Confident, expansive, joyful - it is here that he stakes his claim to greatness. His guitar lines are liquid, cocky yet relaxed, and his vocals are sweet and knowing. His band is strong and never hits a false note but he is the dominant figure on this album. Sure, the collabo with Toumani Diabate is to be expected, but who cares when it is so gorgeous. Somehow, Fondo respects Toure's legacy while tromping all over it at the same time. This is just the beginning for this Malian prince. Sample some here. Other Roads: Fondo Remixed just dropped as well and has some great re-imaginings of cuts from Fondo.

8. Leif Ove Andsnes/Shadows of Silence - As soon as I heard him on WNYC's Soundcheck discussing this album (along with his multimedia approach to Pictures At An Exhibition), I knew this fascinating album was going to be among the year's best. I was not disappointed. Along with introducing me to the work of Marc-Andre Dalbevie and Gyorgy Kurtag, the collection features what may be the most convincing recording of a Witold Lutoslawski piece ever. I have yet to do a side-by-side comparison, but this performance of Lutoslawski's piano concerto seems to outdo Krystian Zimerman's - and the work was dedicated to him. It is wonderful to hear this supremely talented pianist broadening his palette - and expanding our minds in the process. This video gives a taste of the sounds and the process.

9. Wilco/Wilco (The Album) - After the stripped down pastoralism of Sky Blue Sky, it was hard to figure out where Wilco was going to go. Though there were some beautiful songs on the record, it had the feeling of a cul de sac and was their first record that did not represent a substantial expansion of their sound. In a way this album is the second. They return to many of the sounds and strategies that characterized what we can now call "the Jay Bennet era" but rather than being a drawback that is the strength of this album. Simply put, it is a work of very deep mastery - of songwriting, singing and playing. From Glen Kotche's bells on Everlasting Everything to Nels Cline's guitar on, well, everything, all the current members make excellent contributions. And Tweedy does try a few new tricks - the humor on Wilco (The Song) and the gradually unhinged vocals of Bull Black Nova. Just a wonderful record and once again we're left wondering - where will they go from here?

10. Mastodon/Crack The Skye - This is a non-stop storm of songs, played by this hard-living quartet like their lives depended on it. Working with Brendan O'Brien was inspired - he brings a clarity and even swing to the sound without softening it at all. You can hear every virtuoso note - just before it blows a hole in your skull. The story behind the record - a mash-up of out-of-body travel, Stephen Hawking's cosmology, Czarist Russia, and the suicide of Drummer/Vocalist/Songwriter Brann Dailor's sister, Skye. Make of all that what you will, if you can catch your breath. I ended up buying the deluxe edition, which features instrumental versions of all the songs. Usually I just let it run, soaking up the aural adrenaline. With Metallica as elder statesmen, Mastodon are the metal band of the current era. When they come up with their own Enter Sandman, the sky may actually crack from the impact.

Damn, that was long winded. I had a lot to say after confining my thoughts to 140 character Tweets all year!

In two weeks: The Other Ten and assorted highlights from 2009.