Walking In The Reign: Grace Jones at 65 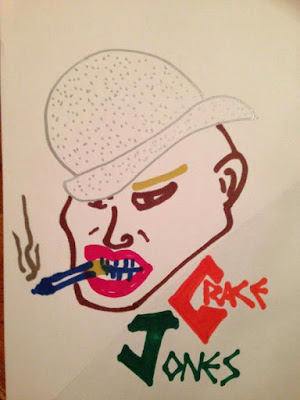 At the risk of having a TMI moment, I'm going to share the fact that there's a little part of my brain that is dedicated to Grace Jones's version of Use Me, the Bill Withers song. A quick mental flick of the switch and it starts playing. The rhythm section of Sly & Robbie, along with the keys of Wally Badarou, sets the stage, concocting a fantastic groove that's both earthy and mechanical. Then Grace enters, working her slightly stentorian mezzo against the beat: "MY friends/THINK that/It's THEIR appointed duty..." So freaking fabulous. It was actually that song that sealed the deal for me with Grace, standing in Tower Records in 1998, the year the excellent compilation Private Life was released. I had bought the 12" of Pull Up To My Bumper in high school and had put it on countless mix tapes over the years - it is still a guaranteed floor-filler - but had not invested further. Now I was a true convert and have remained so ever since. When she's at her best, there's something about her bravery and strength, not to mention her uniquely rhythmic singing, that moves me.

Private Life covers the three albums she made in Compass Point, Nassau, with the amazing band Island Records head Chris Blackwell hand-picked to work with her. The Caribbean was a homecoming for Grace as she was born in Jamaica, moving to Syracuse, NY at the age of 12. It wasn't too long before she made her escape from that frozen city and she was quickly mixing it up in NYC and Paris as a model, scene-stealing party-goer and, eventually, a singer. It soon became obvious that she was an extension of a through-line that started with Josephine Baker and continued through Eartha Kitt (I'm a big fan) - unconventional vocalists with a strong theatrical bent and personae that freely confront issues of gender, race and sexuality.

Her first three albums made her name in the hardcore disco underground of the Pradise Garage and its ilk, but it wasn't until Blackwell sent her down to Nassau that she began to make wider waves. The story goes that he sent down some of the outrageous photos Jean Paul Goude had made of her as a virtual advance team. Sly, Robbie and the rest of the Compass Point Allstars began work on the album with huge posters of Grace staring at them from all angles, though they still might not have been fully prepared when she showed up in the flesh. Covering songs by The Normal, Iggy Pop, The Police, Chrissie Hynde, Tom Petty and others, she proved to be a genius interpreter of contemporary songwriters. On Living My Life, the third Compass Point album, her own songwriting became richer and more personal. While she was often late and sometimes a no-show at her concerts, the film A One Man Show used videos and live footage to display a riveting and unique performer.

After Living My Life, Grace tried something new, working with producer Trevor Horn on Slave To The Rhythm, which yielded another classic single in the title track. She co-wrote every song on Inside Story in 1986, working with Nile Rodgers to update her sound yet again. Like Slave To The Rhythm, Inside Story has some 80's clatter, but I'm Not Perfect (But I'm Perfect For You) is a strong single and the songs continued to show more nuance. However, Bulletproof Heart, the 1989 album overseen by her then-husband (naturally, she's had a couple), found her either subsumed or unsupported by the production.

There were ups and downs after that point and a long period of quiescence. In 2008 she released Hurricane, a return to form that found her working with Sly & Robbie again and sharing her most personal songs yet. The frankly autobiographical Williams' Blood revealed that her maternal grandfather, Dan Williams, was a musician who had not always behaved himself while on the road with Nat King Cole - a far cry from Jones' preacher-father. The dichotomy between the Jones blood and the Williams blood is likely a source of the tension and emotional depth contained in Grace's finest work.

I had a chance to see her perform in 2009 and she was as spectacular as I had imagined, managing to sing well while wearing incredible costumes. She's a bit eccentric, obviously, and chattered out autobiographical anecdotes from backstage during each costume change. While there hasn't been any new music since Hurricane, she made a recent splash at the Queen's Jubilee concert, singing Slave To The Rhythm while unflappably hula hooping through the whole song. Queen Elizabeth was not in the stadium yet, which is just as well - it might have been confusing to have two queens there at the same time!

Happy 65th birthday to the one, the only, Miss Grace Jones.

Posted by Jeremy Shatan at 9:37 AM No comments:

No Longer A Big Inner

I have a not so hard and fast rule about avoiding multiple performances by a band or musician during the same album cycle. This is partly to keep my schedule from quickly spiraling out of control and partly to maintain a freshness in relation to their musical performance. It can be a little disappointing to discover that that spontaneous moment that levitated the audience was actually carefully calibrated. A concert that is less than completely satisfying, however, trumps the rule whenever possible. Back in the day, I saw Siouxsie & The Banshees three times over the course of a year, hoping for a performance as stunning as their records. Never happened, although one show was so stunningly loud that all I heard were overtones. For a week. Somewhere in my ears are some blackened goth hair cells - but that's another story.

In the case of Matthew E. White, when I saw him at Mercury Lounge last summer, it was one of his first gigs outside his hometown of Richmond,VA, and it showed in the sometimes tentative performance. Granted, White's stunning debut album, Big Inner, features layers of horns, strings and backing vocals, and serving the songs with a more stripped down ensemble took some doing. Percussionist Scott Clark was a canny choice to enrich the sound but he appeared a little out of his depth that night, and the sound mix on his instruments was not always effective. Still, I left the club with a warm glow and the firm expectation that a few months on the road was going to turn this group into a monster.


I'm happy to report that my hopes became reality at the Bowery Ballroom last Tuesday when White and band returned after many dates in Europe and America. As I told him after the show, they did everything right. They stretched out further into the songs, increased the dynamic range, added a cover song (a gritty take on Waylon Jennings' Are You Ready For The Country) and two new songs, and just plain GELLED. Clark and drummer Pinson Chanselle played as one, providing a dense undercurrent of polyrhythms, and bassist Cameron Ralston proved himself the heart of the band, whether providing a deep groove or working the upper notes on the neck of his instrument. White ripped off guitar licks with the expected economy but less reticence than the last time I saw them. His laid-back voice showed a few more gears, although that could have been the steroids talking - White explained that a shot had brought his voice back from the brink. He also apologized for any surly behavior at the merch table caused by the side effects (he needn't have).
The band is filled out by Trey Pollard, who fills in the gaps on pedal steel, piano and guitar, and Gabe Churray, also known as Snow Panda, who adds layers of atmospherics and dubbed out sounds from behind a bank of keyboards and effects boxes. He may have been doing the same stuff last August, but it was only this time around that I thought, "This guy's gear is set on stun."


The only thing that didn't add up this time around is that the room wasn't jam packed. I'm expecting that will also be different next time.

The show was opened by Helado Negro, an affable enough guy with some bass-heavy programmed tracks and an okay voice. His sound seemed promising at first, but quickly grew tedious due to the lack of melodic variety. It's always hit or miss with opening acts...

Matthew E. White's tour continues - make sure you're aware of when he hits your area.

Posted by Jeremy Shatan at 10:59 AM No comments: