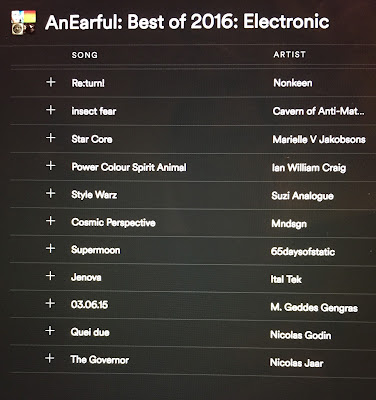 There's some interesting molecular crosstalk between this list and some of the "alien R&B" I described in my last post. But genre lines are ever meant to be blurred and many is the time that one style of music has been re-energized by incorporating aspects of another. Lots of "classical" composers are also using non-organic sounds on which to hang their music, which probably influences rock-oriented musicians, further fertilizing an already prolific field. Here's the top of 2016's crop of what Mojo Magazine still calls "Electronica."

Nonkeen - Oddments of the Gamble and The Gamble Did you ever wish the intro to Riders On The Storm went on forever? The whole song is fantastic (except maybe that line about a brain "squirming like a toad"), but the opening minute is godhead. Nonkeen put out two albums this year and both of them have plenty of that beautifully simple mystery and majesty. An on-off collaboration by Frederic Gmeiner, Nils Frahm and Sepp Singwald, they channel their passion for cassette recording and chance occurrences into sublime sounds. I prefer Oddments slightly to the Gamble as it's a little groove heavier, with some of the cracked optimism I associate with Stereolab, but you can pick which one to listen to with a coin flip - which is how they chose which one to release first!

Cavern Of Anti-Matter - void beats/invocation trex Speaking of Stereolab, head honcho Tim Gane is back where he belongs with Cavern's mix of test-lab electronics and motorik rhythms, still seeming optimistic but maybe a little darker than back in the 90's. The only track that doesn't work for me is the one with Bradford Cox on vocals, which blend awkwardly with the soundscape and feel like an intrusion on the mood. Terrific album nonetheless and a must for old Stereolab heads - and new ones: if you're unfamiliar, make a plan to change that.

Marielle V Jakobsons - Star Core Jakobsons, a classically-trained multi-instrumentalist with whom I was completely unfamiliar until now, has created an immersive glittering prize of a record with Star Core. Using a base of evolving, richly evocative analog synth sounds, and adding violin, flute, bass, her voice, etc., she builds sound designs that coalesce into finished images and then evanesce. It's a little dark yet never bleak as the excitement intrinsic in creating such perfect music is transferred to the listener.

Ian William Craig - Centres Like Jakobsons, Craig has also spent time in the academy, training in vocals and composition. This is his third gorgeous album combining his treated and distorted voice with artfully distressed tape loops. Justin Vernon may be a fan as Craig mines some of the same seams as heard on 22, A Million, Bon Iver's latest album. Craig's approach is always cinematic, too, with a hidden narrative that keeps you listening from beginning to end.

Suzi Analogue - Zonez V2: The Speakers Push Air & My Tears Dry Like David Bowie, I never gave up on drum'n'bass and have even been known to gift copies of out-of-print gems like So Far by Alex Reece (get yours for 32 cents!). Analogue's stuff has a bit of that nervous energy so I was all over it as soon as I heard her on the same bill with Novelty Daughter earlier this year. She also adds an emotional overlay that seems very of the moment. Her hard beats lead you to dance, but her minimalist melodic cells keep you in touch with what fuels your abandon.

Mndsgn - Body Wash I've loved the music of Ringgo Ancheta since Yawn Zen in 2014, but that wonderful album feels like a series of sketches compared to this. Not to worry, though, his glassy sounds are still weightless, there's just a bit more conviction to the song structures, a sense of a statement of purpose, and that purpose is to seduce you into forgetting yourself and where you are just for a few moments. Do those four walls really confine you? No. Your mind's design can take you anywhere, with the right soundtrack.

65daysofstatic - No Man's Sky: Music For An Infinite Universe I'm not a gamer, unless you count chess and Scrabble, but I'm more than aware that music has become an ever-more integral part of video games. They even perform symphonic suites assembled from best-selling games at Carnegie Hall and other prestigious venues. But having the wide-screen instrumentals of 65daysofstatic soundtrack a game is a genius idea that I wish I had thought of first. I understand that No Man's Sky has received mixed reviews but it's not even necessary to know what the game is about to lose yourself in these tracks. And lose yourself you will, especially in the long pieces on disc two, which are culled from the "procedural audio" that covers the universe of the game no matter where the player decides to go. Their patented blend of live and looped drums, epic guitars and grandiose keyboards is richer than ever, suggesting that this long running Sheffield quartet has finally found their niche in the wider world.

Ital Tek - Hollowed Alan Myson, who has also released music under the name Planet Mu, always seemed to have more promise than the tight reins of dubstep allowed him to express. Hollowed finds him coming into his own, crafting prismatically structured pieces that have echoes of Eno, Popol Vuh, and John Carpenter, while sounding very individual. He could be next on the list for video game developers - either way, I'll be very intrigued to see where Ital Tek goes next.

M. Geddes Gengras - Two Variations and Interior Architecture I first became aware of this prolific L.A.-based synth magus from his remarkable entry in the collaborative FRKWYS series in 2012. That record found him working with dub specialist Sun Araw and legendary reggae harmony group The Congos. His ability to build immersive sound sculptures from a limited palette of materials was clear there and continues to be true on Two Variations. Both half hour pieces feel spontaneously generated, with a sense of discovery and play that is contagious, especially on 03.06.15, the first variation. The second work, 04.10.15, drags a little in the first 10 minutes but repays your attention in the latter half when it gets busy and a little angular. You can dip in and out of the variations but you may find yourself listening closely to follow the evolving threads. Interior Architecture is more ambient, four abstract pieces that often (ironically?) refer to sounds of the natural world. Gengras invites Seth Kesselman to contribute some new textures with his clarinet in the third piece, which is a nice touch. Maybe more collaboration is a good thing for Gengras, but he's always up to something interesting - and 03.06.15 proves his strength as a loner.

Nicolas Godin - Contrepoint It was Mike D. who turned me onto the French retro-synth duo Air back in 1989, handing me a promo copy of Moon Safari across the table at lunch one day. He knew me well, as I quickly became obsessed with their lush, melodic, fun songs. I spread the gospel far and wide and watched delightedly as songs like Sexy Boy and Un Femme d'Argent installed themselves in the culture. But the ultimate reward never came as nothing else they did was nearly as compelling. Now we have 50% of Air (O1?) with this solo album that is simultaneously wacky and accomplished, moving through a variety of sounds and styles in just over 30 minutes. As the title indicates, the ultimate inspiration for everything that follows is the music of J.S. Bach, the master of counterpoint. There's even a song called Bach Off in case you didn't catch Godin's drift. But instead of Baroque sounds, we get hints of Medieval prog, cool jazz, easy listening, Lou Reed's Street Hassle, and French pop to keep you guessing -  and entertained - throughout. I know nothing about the dynamic between Godin and Jean-Benoît Dunckel, his partner in Air, but if he wants to continue in this vein, I'll be right there with him.

Nicolas Jaar - Sirens It's taken a while for young Mr. Jaar to win me over again after the seismic jolt of Space Is Only Noise, his brilliant debut from 2011. There were a couple of tracks from last year's Nymphs EP's that piqued my interest, which was more than I can say of Darkside, the cul-de-sac side project he pursued with tiresome guitarist Dave Harrington. But Sirens finds some of the wit and unbearable lightness of Space returning, with beautiful textures and bouncy rhythms, alongside a newfound compositional maturity and even a little aggression on Three Sides of Nazareth. Jaar has always had a narrative drive to his best work and that seems to be getting stronger. I would not be surprised to see his name on some kind of visual project, such as movie or TV show, in the very near future.

Novelty Daughter's Semigoddess was #4 in my Top 20, which means it was the best electronic album of the year - make sure you backtrack if you're not already a fan. All the selections above can be sampled in this playlist and you may find yet more joy in the Of Note In 2016 (Electronic) list.

Coming next: the best of the rest of the year's classical and composed recordings.

Posted by Jeremy Shatan at 8:43 PM