Record Roundup: In Their Prime 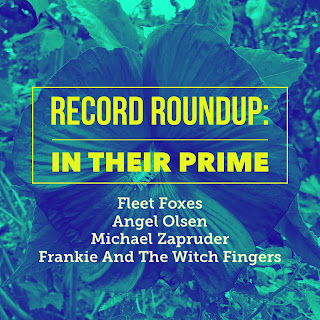 Here are four albums from artists who are at least at mid-career - and seemingly at the peak of their powers. Crucially, each album is good enough to serve as an introduction to their work, should you be unfamiliar - as in one case I was.

Fleet Foxes - Shore What are the elements that make fans like me so devoted to this band? First there's the embrace of many acoustic instruments in concert and counterpoint, creating an atmosphere of comfort much like that old cliché, the favorite sweater. Then, there's the heavenly voice of Robin Pecknold, often joined in three- or four-part harmony. Finally, there are the lyrics, which invite you on a quest for resolution and understanding of each other, the world, and ourselves.

This surprise album, made before and during pandemic lockdown, also positions Fleet Foxes as Pecknold's project, as it includes none of the band members credited on previous albums. He has also said that he had a bigger hand in those albums than we earlier thought. Many of the stunning harmonies, for example, were him and him alone, painstakingly layering his own voice. That's not to say there aren't collaborators on the three earlier albums or here, where members of Grizzly Bear, the horn section known as The Westerlies, and even two of Hamilton Leithauser's children appear, among others.

Whether a result of the extended process, new partners, or simply a honing of Pecknold's craft, this is the most direct and uplifting Fleet Foxes album yet, often cruising at a celebratory gallop, or (as on Can I Believe You) offering bold dynamic shifts, those gleaming horns seeming to sparkle in ocean sunlight. Few of the introspective convolutions of 2017's Crack-Up - wonderful as they were - are present on Shore. The sense of compassion and empathy is so strong, as on Featherweight when he sings, "May the last long year be forgiven/All that war left within it/I couldn’t, though I’m beginning to/And we only made it together," that it's hard to imagine even Fleet Foxes skeptics not finding Shore a welcome presence in their lives.

And when you've listened to the album a bit, you could expand the experience by making a playlist of all the artists Pecknold lists in Sunblind, his gorgeous tribute to his heroes. Compiling Richard Swift, John Prine, Bill Withers, Judee Sill, Elliot Smith, Nick Drake, Tim Buckley, Jimi Hendrix, Chris Bell, Arthur Russell, Marvin Gaye, Curtis Mayfield, and others, will make for a heck of a listen, and may further illuminate the sheer artistry and passion of Shore, an album I would prescribe as medicine during these times of multiple stressors on the heart, body, and mind. Take a dose.

Angel Olsen - Whole New Mess Anyone fascinated by the creative process - and I am - can't help but be intrigued by the idea that this record, primarily made up of earlier recordings of songs that appeared on last year's triumphant All Mirrors, has been in the can since 2018. Artists are often insecure, but it's hard to imaging listening to these sumptuously emotional performances and thinking they are in some way unsatisfactory. I say "earlier recordings" instead of demos, because these stripped down versions, mostly Olsen's guitar and voice with occasional organ from her co-producer Michael Harris, feel complete in and of themselves. The recording, made in a converted church with a resonant natural echo, is tactile and may best be experienced on a "real stereo" so you can feel the weight of her pick against the strings and have her voice move some of the air in your own space.

On All Mirrors, the songs were presented in maximalist clothing, strings and synths stacked to the rafters. Hearing them in skeletal form only confirms their strength as exquisitely constructed combinations of form and content. Even the 101 strings of the Melachrino Orchestra could not have dimmed the indelible incandescence of these melodies, and Whole New Mess simply confirms Olsen's place as one of the preeminent songwriters of our time. On the title track, one of two new songs here, Olsen declares, "It won't be long before it's really showing/It's every season where it is I'm going," and it's hard to know if she was looking ahead to All Mirrors or even further into the future - either way, I plan to be there.

Michael Zapruder - Latecomers Zapruder is a protean composer of sparkling chamber music, innovative operas, and folk-rock songs with a literary attention to detail. Latecomers is his first collection of the latter in 11 years - and my introduction to his talents. While the album was recorded over many years and includes textures ranging from the acoustic propulsion of the luminous title track to the almost glossy pop of New Quarantine, it still feels like a coherent collection, like having a wide-ranging conversation with a friend. That second song is a dystopian imagining of quarantine as a gated community that was written years before our current news cycle - not the first time an artist has shown an almost uncanny prescience.

But the strongest songs here - and they're all good - seem more focused on personal matters. Seafaring, a song for which Michael Chapman and Sam Beam would kill to claim authorship, goes for the gut when Zapruder sings: "And then that house in Maryland got cancer in its walls/and we made all those long and sad phone calls." TOO relatable - I think we owe each other a hug. Zapruder's wry, somewhat dry voice, is perfect for delivering the wisdom and wit that abound on Latecomers, maybe no more so that in I Don't Think You Understand, the last track, which has him explaining with saintly patience: "There’s salt in the water of the sea/there’s sugar in the fruit of the land/but if you think there’s an answer in me/I don’t think you understand." So no answers, maybe, but plenty of the right questions, all couched in finely wrought melodies and clever musical settings. Consider me more than pleased to make Zapruder's acquaintance!

Frankie And The Witch Fingers - Monsters Eating People Eating Monsters... On 2019's Zam, their fifth album, this LA-based prog-psych band arrived at a new level of supremacy in their chosen field. On songs like Pleasure, the rhythm section of founding bassist Alex Bulli and new drummer Shaughnessy Starr achieved an almost frightening level of power and precision, and the sound throughout was of a band truly coming into their own, especially singer and songwriter Dylan Sizemore, who owned his vocals more than on previous records. From that new peak, FATWF have only continued to ascend on this latest collection. Even with Bulli having departed, the rhythms achieve a tight looseness (or is it a loose tightness) that is the height of head-nodding immersion.

The guitar dynamics of Sizemore and Josh Menashe are also something to behold, whether interlocking in dizzying fashion or assembling to deliver hammer blows, like the power chords on Reaper, which give my speakers a welcome opportunity to show off. But there's far more than brute force here, with new textures introduced from cello, synths, and plenty of group percussion jams. The lyrics seem to offer a scabrous view of humanity, with music and other modes of altering consciousness a saving grace of life on planet earth. Whether it's the wah-wah workout on Sweet Freak, the delirious twin-leads of Where's Your Reality, or the near-funk of Simulator, FATWF provide their own best argument that rock and roll can get you past whatever it is you're going through - and in spectacular style, too.

Find tracks from all these albums - and many more - here or below.

Posted by Jeremy Shatan at 12:35 PM No comments: 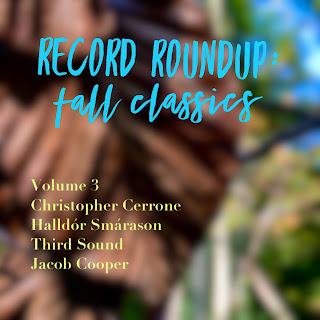