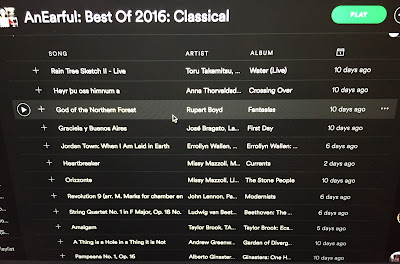 If you're looking for optimism - and many people are these days - look no further than the world of classical and composed music, which is thriving even as the music business continues to evolve. Out of the onslaught of releases, I tend to focus on new music, including many world-premiere recordings, partly because I'm an adventurous listener and partly because I did a lot of concentrated listening to bedrock repertoire at the dawn of the CD era.

Some new albums of old music rise above the pack, however, because they bring rare pieces to light, put familiar pieces in a new context, or because of the extreme excellence of the performers. I discuss some of these below, but I also recommend perusing the Of Note In 2016 (Classical) playlist for more old wine in new bottles, including a number of Shostakovich recordings.

Get Reacquainted
In the interest of space, I will begin by pointing you to some of the year's best that I covered in previous posts but that didn't end up in The Top 20. All of these records continue to enrich, enlighten, and entertain me, and I think you will find that at least some do the same for you.

Discovered But As Yet Uncovered
My listening in this general area of music extended well beyond what I covered above. Some discoveries came via the various PR firms who are gracious enough to keep me in the loop, others through blogs, people I follow on Spotify (check out Eule Chris - he lives on the cutting edge), or even corporate newsletters. Some, however, came from an unlikely source: the Grammy nominations.

Even though the headlines are usually about pop-star rivalries (Beyoncé vs. Adele, anyone?), eleven nominations are in the classical vein. Until this year, I had never thought of mining that list for recordings I might have missed. I immediately went to Spotify's Grammy playlist to see what sounded good and discovered that they ignored that side of things completely. Instead of just getting mad, I made my own list for all to enjoy and in the process found a some great records, including the first three reviewed below.

Martin Kuuskmann - Bassoon Concertos Kuuskmann is a bassoon player of extraordinary skill and feeling and here introduces Christopher Theofanidis's equally extraordinary Concerto. This is a work of subtlety and wit which is beautifully orchestrated and unafraid to tap into the holy drone on occasion. It really needs to be heard to be believed. Kuuskmann follows it with the sprightly Concerto in F Major, WoO 23 by Johann Nepomuk Hummel, a student of Mozart's. Kuuskmann handles the requirements of this minor masterpiece with aplomb and its Classical intricacies resonate nicely with the Theofanidis work. I do somewhat question the wisdom of including a third concerto, in this case Mozart's K. 19 in B-Flat Major, as I find myself growing fatigued when listening to all three works in a row. The audience (this superb-sounding album was recorded live) doesn't seem to mind, responding enthusiastically to all three concertos and to the lagniappe of an encore, a short piece by Tōnu Kõrvits. You don't have to listen to all three in a row, however, but listen you should, especially to Theofanidis' brilliant piece. (Nominated for Best Contemporary Classical Composition)
Ludovic Morlot & The Seattle Symphony - Dutilleux: Orchestral Works Henri Dutilleux is probably the third greatest French composer of the second half of the 20th Century. But don't take such a qualified statement as damnation via faint praise. It's just that when Pierre Boulez and Olivier Messiaen are in your cohort it's easy to be overlooked. That trend should be reversed by excellent collections like this one, overflowing as it is with brilliantly orchestrated, colorfully melodic music. It you agree, there's more to discover, like the definitive recording of his song cycle Correspondances featuring the great soprano Barbara Hannigan. (Nominated for Best Surround Sound Album and Best Engineered Album)

Ian Bostridge & Antonio Pappano - Shakespeare Songs Let's be upfront here: Bostridge is the greatest living singer of lieder and art song. He brings the necessary interpretive nuance along with the requisite spirit of scholarly inquiry, reinvigorating this art form with every project to which he puts his lilting tenor and lively mind. Shakespeare Songs, which includes settings of the Bard's words by Finzi, Korngold, Tippett, and Stravinsky, among others, is no exception. The sequence flows naturally, like a good recital, and persuasively makes the case for this mostly unfamiliar material. Pappano and Bostridge work together very well, and the brief additions of lute, flute, viola and clarinet lend sparkle and variety. That said, one of the most remarkable songs is the a cappella closing track When that I Was but a Little Tiny Boy by an anonymous composer. Based on a lyric from 12th Night that is probably older than Shakespeare, this tune contains in its two and a half minutes all that song can do to connect humans across the centuries. It's a fitting end to a collection paying homage to Shakespeare's 400th birthday. (Nominated for Best Classical Solo Vocal Album)

Ian Bostridge & Xufei Yang - Songs From Our Ancestors Besides being a great artist, Bostridge is always busy - this is the other great album he released in 2016. Yang is a wonderful guitarist who collaborated with Bostridge on his collection of Britten songs a couple of years ago. Like Pappano, she is a great accompanist with plenty of personality, and a perfect partner for Bostridge. Featuring both British and Chinese songs as well as classics of German lieder, this is a beguiling and smart album that illuminates traditions of both artists. It also has the world premiere of Welsh composer Stephen Goss's fine song cycle Book of Songs for Tenor & Guitar, which was commissioned by Bostridge and Yang and uses Chinese poems from millennia ago. Keep an eye on Bostridge in 2017 - I'm sure he'll be up to something great!

Talea Ensemble - Aaron Helgeson: Poems Of Sheer Nothingness This challenging album pushes the idea of song into the furthest realms. Featuring committed performances by the Talea and soprano Susan Narucki, the title piece includes lots of extended techniques for all the players. Notes on a page (Of Sappho) is a setting of fragments by the Ancient Greek poet by Anne Carson, a true genius of letters. Helgeson is more than up to the task and the results are sublime. High culture gets no more elevated - and ultimately elevating - than this.

Gerd Schaller with the Philharmonischer Chor Munchen, Philharmonie Festiva - Anton Bruckner: Sacred and Organ Works In the classical tradition, much of the singing is to the glory of god, which is the case with Bruckner's Third Mass and his setting of Psalm 146, both included here. But you don't have to be a believer to feel the spirit animating such magnificent music, especially in such towering and inspired performances. Schaller is an experienced conductor of Bruckner's symphonies and brings all of that knowledge to bear here, with a firm hand on structure and dynamics. There's about 25 minutes of organ music ending this double album which I am less able to judge but I would be surprised if it didn't meet the highest standards. Bruckner was a deeply devout man, making this some of his most personal work. I can't imagine him not being grateful for this collection of an underserved portion of his repertoire - I know I am.

Jóhann Jóhannsson - Arrival (OST) One of the reasons Jóhannsson is so in-demand as a film composer is his ability to illustrate the underlying emotions in a narrative. For Sicario, his sonic dissection of dread elevated further what was already a superior police procedural. This nearly classic sci-fi movie benefits from the way Jóhannsson uses chords, harmonies, and textures to illustrate the mystery, terror, and hope in the story. It's hard to imagine a better match of music and film and it's a great listen outside of the theater as well.

Jóhann Jóhannsson - Orphée With Hollywood constantly calling, and other film projects, it's been six years since Jóhannsson recorded a passion project. He engages with narrative here in any case, loosely tracing the story of Orpheus, the rock star of Greek mythology who lost his wife Eurydice to the underworld because he couldn't follow directions (namely "Don't look back"). Jóhannsson's approach is poetic enough that you don't have dwell on the narrative unless you want to. The touches of glitchy electronics and half-heard vocals keep Orphée from being cavity-inducing but it is still very...pretty. There's enough variety to make for a satisfying listen, though, and the last track, performed by Paul Hillier's Theater of Voices, is truly stunning. Perhaps Skylark should add it to their set-list.

Lucy Claire - Collaborations No. 2 and Selene (Music For Contemporary Dance If you're a fan of Jóhannsson and peers such as Nils Frahm or Ólafur Arnalds, you would be seriously remiss in not getting into Claire's work. She creates post-ambient chamber music of surpassing beauty and brings her production skills to bear as well, making each piece a rich experience. If you seek icy textures married to melodies that convey a dignified melancholy, look no further than these two EP's. To make it easy for you, I've combined all of her 2016 output into this playlist - what are you waiting for?

Scott Walker - The Childhood of a Leader (OST) This is the second soundtrack by Walker, the genius singer/songwriter/composer who took a sharp left turn from pop stardom in the 70's and never looked back. This 30-minute suite is far more sophisticated as orchestral music than his work for Pola X in 1999, and is another window on which to view his remarkable development as an artist. Regardless of the quality and content of the movie, this is dark and exciting stuff, with some original and avant garde textures. But there's enough connection to composers like Bernard Herrmann and Miklos Rosza to make it Walker's most accessible music in decades.

Francesco Giannico & Giulio Aldinucci - Agoraphonia This richly immersive album builds on crowd-sourced field recordings around the idea of the town square, which were then blended into five electronic suites comprising ambient, atmospheric, mechanical, and industrial sounds. It's a bit of a mind movie and if you like the M.O.T.H. album mentioned above you'll want to screen Agoraphonia in your cortical theater.

Peter Schaaf - 44 Waltzes on 88 Keys This charmingly single-minded collection makes a perfect palate cleanser for the mostly heady listening to which I've been steering you. Consisting of sets of waltzes by Schubert, Brahms, Dvorák, and Ravel, it's a great opportunity to compare each composer's approach to one of the original dance crazes. Schaaf has had a 50+ year career as a pianist, accompanying such luminaries as Yo Yo Ma and tenor Jon Vickers. After a long break to become a professional photographer, he returned to the keyboard with an album of Isaac Albéniz's Iberia in 2008. Schaaf's playing here is always lucid and light, never attempting to ascribe more importance than necessary to these miniatures. It's a delightful album and if listening to 44 piano waltzes sounds like overkill, you can do what I did and make a playlist for each composer. The album is self-released and can be purchased or streamed on Schaaf's website - pay a visit and tap your toes in 3/4 time.

Check out tracks from most of these releases here and find even more bounty in the Of Note In 2016 (Classical) playlist. I've also started up lists to gather 2017's notable music - concentrate on classical by following this one.