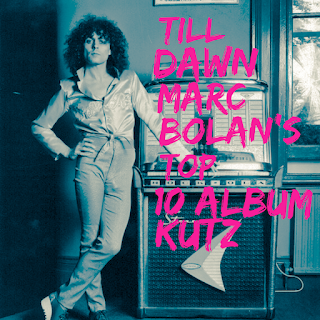 In the 38 years since Marc Bolan was killed in a car accident his influence has only grown wider. The glam rock stomp and style he perfected is everywhere. Whether it's via his own songs, which are used in movies and commercials several times a year, or in the sounds of new bands. There was even a pronounced T.Rex influence on the new Wilco album, Star Wars. In Rolling Stone, Jeff Tweedy owned it: "Some of those sounds reminded me of glam rock and T. Rex and things like that, which I love. I really adore that stuff, but I've never been androgynous enough to pull it off, you know, stylistically."

Even with all the exposure, Marc Bolan and T.Rex are known mainly as singles artists, especially in this country where you could easier get bipartisan collaboration in Washington than get classic rock radio to play anything other than Jeepster and Get It On. But over the course of the T.Rex phase of his career, the quality stuff was not confined to the jukebox.

Here then is a list of some of my favorite album cuts from 1970-77. Hopefully you will be intrigued enough to further investigate the entire oeuvre of the man David Bowie called The Prettiest Star.

2. Rip Off (Electric Warrior, 1970) - Even elves get angry. The last track on Bolan's mega-breakthrough takes potshots at the 60's in surprisingly trenchant fashion: "Dancin' in the nude, feelin' such a dude, it's a rip off." But this is no chaotic catharsis - while the band works up a real head of steam, there's also sax, strings, suspended chords, and an elegiac ending. He knew it was over.

3. Rock On (The Slider, 1972) - This tight-as-hell little wonder could easily have been a single. Visconti's production couldn't be more perfect, with layers of keyboards underpinning Bolan's nasty riff, and signature Kaylan-Vollman backing vocals behind Marc's tough vocal. Bolan's bite-size guitar solo is a marvel. Rock on!

4. Left Hand Luke (Tanx, 1973) - A soul and gospel-drenched mini-epic to end what many think is the last classic T.Rex album. The way Bolan interacts with the backing singers is gorgeous and prefigures some of the things Bowie did on Young Americans. Also, he used the word "myxomatosis" (it's an "animal disease," apparently) 30 years before the Radiohead song.

5. Change (Zinc Alloy and the Hidden Riders of Tomorrow, 1974) - In Dandy In The Underworld, Bolan sang "change is a monster and changing is hard," but the mood is even darker on this brooding song: "Change is coming, you better run." Through the cocaine and brandy haze, a moment of quiet clarity.

6. The Avengers (Superbad) (Zinc Alloy and the Hidden Riders of Tomorrow, 1974) Bolan fell even further in love with funk in 74, and with soul singer Gloria Jones, whose outrageous vocals outdo Kaylan and Vollman. The album, Bolan's last with Visconti, is a bit cluttered, but it all comes together on this sly number.

7. Till Dawn (Bolan's Zip Gun, 1975) - This is really the one that got away. Marc updates 1950's milkshake romance to extravagant lengths. A swoon in song form that should have been a single. There are many alternate takes and they're all fantastic.

8. Theme For A Dragon (Futuristic Dragon, 1976) - Marc should have been doing soundtracks but his devotion to pop-song form kept things concise. Shredding guitars, sweeping strings, audience noise, and a touch of disco make this a blast from start to finish in just over two minutes.

10. Hang-Ups (Dandy In The Underworld, 1977) Bolan gets earthy on this nifty shuffle from his last album. "Get off my back and leave me/Aw, shit, let's get it on," goes one self-reflexive lyric, while the chorus "I'm such a contradiction, I'm just hung-up," makes me think Bolan was becoming more self-aware and understanding his place in what came to be known as the "Me Decade." Somehow, I think he would have sorted out the 80's too.

Posted by Jeremy Shatan at 7:01 PM No comments: 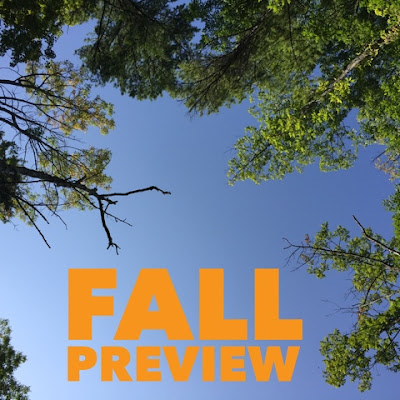 When the sunlight decreases and the temperatures begin to drop, a new layer of cells forms that cuts off leaves from the branches that supply their nutrients. The leaves are eventually released from their trees and drift to the ground. The fall album release schedule will see many musical leaves drift toward us, but instead of being dead they will come to glorious life in that infinite space of the universe between our ears. Here are a few things that should make this a very colorful autumn.

Guilty Simpson - Detroit's Son This gritty rapper has been at it for a while, honing his flow and never settling for less when it comes to the beats he rhymes over. This new album, produced by Quakers member Katalyst, is his strongest album yet. Out September 11th on Stones Throw.

Phil Cook - Southland Mission Cook's pedigree as a member of Megafaun, a former associate of Justin Vernon's in DeYarmond Edison, and a member of Hiss Golden Messenger's touring band, among other things, guaranteed his new album would be worth a listen. And it is - repeatedly, in fact. Rootsy and meticulously produced, Southland Mission is the real "new Americana" - accept no substitutes. Cook is also heading out on an international tour but you can catch him at Rough Trade in NYC on September 23rd. Out September 11th.

Dr. John - The Atco/Atlantic Singles 1968-1974 Looking at the peak of Mac Rebennack's legendary career through the prism of his singles should be a recipe for pure pleasure. Make sure you're in the right place at the right time. Out September 18th on Omnivore.

Lloyd Price - sumdumhonky Not a record but an autobiography that promises to be a "no holds barred" look at 80 years in the life of a founding father of rock'n'roll (Lawdy Miss Clawdy, Stagger Lee, etc., etc.). Price has survived in every aspect of the music business while also surviving as a black man in America during tumultuous times past and present. Out October 13th from Cool Titles.

Killing Joke - Pylon The 16th album (and first since 2012) from the post-punk legends will feature their original lineup again. Beyond that not much is known,but judging by the pummeling Autonomous Zone, which they have played in concert, James Murphy needn't worry: they haven't lost their edge. Out October 23rd on Spinefarm.

Van Morrison - His Band and the Street Choir Moondance was a delight but this was the album that sealed the deal for me with Van Morrison. This expanded version will likely earn its keep with the alternate take of I've Been Working, which is supposed to be even funkier than the released version. Van's masterpiece Astral Weeks is also getting the deluxe treatment. Out October 30th on Warner Bros./Rhino.

Boots - Aquaria Everything I've heard from this makes me think it's going to be more interesting than anything a Beyonce collaborator should be capable of doing. The sounds are lapidary but Boots doesn't seem as sure of himself as a singer and it remains to be seen if that will be a deal-breaker. Out November 13th on Columbia.

Kanye West - Swish Okay, now that we know you don't understand awards shows, can you stay away from them until you finish the follow-up to the mighty Yeezus? Out TBD.

The magic doesn't only happen in the studio. Here are some highly recommended live experiences in NYC. Many of these people are performing elsewhere as well - check your local listings, as they say.

Holly Miranda will be playing at the Mercury Lounge on Thursday, September 17th and Friday September 18th. Those will be full-band concerts but the creator of my number one album of the year so far will also be playing a special solo concert at The Studio in Freehold, NJ on September 11th. That's the one I'm going to and I'm bringing cookies for the potluck. Www.concertsinthestudio.com

Ibeyi will be gracing the stage of Webster Hall with their intoxicating blend of world sounds and hip hop production on Friday October 2nd.

Nicole Atkins, whose Slow Phaser was a big favorite from 2014, will be playing Webster Hall with J.D. McPherson on Friday October 9th.

Michael Chapman and Ryley Walker will both be at Rough Trade NYC, also on Friday, October 9th. This lineup may just win the "embarrassment of riches" award for 2015.

Chance The Rapper and several friends will be at Terminal 5 on Sunday, October 25th. As much as I want to see him, I'll have to see if I'm in the mood for a posse concert.

Wand will be bringing their unique brand of buzzing-amplifier mayhem to Mercury Lounge and Rough Trade NYC on Friday November 13th and Saturday November 14th, respectively.

Baroness - Purple Some fans were underwhelmed by their last album, Yellow & Gold, but I thought it was beautiful. The heavy stuff had a lighter touch and the lighter songs were only deceptively so. Baroness's rise was slowed by a devastating bus accident that led to the departure of two members. They regrouped and worked their way back to full strength on the road. Purple will be the first album with their new rhythm section of bassist Nick Jost and drummer Sebastian Thomson (known for his work in Trans Am), and based on Chlorine & Wine it's going to be a doozy. Out December 18.

If you want an easy way to listen to what I'm fussing about, here's a handy Spotify playlist:  http://open.spotify.com/user/jshatan/playlist/24Fm3xWcD1S1gEaVZ088bS.

What are you looking forward to?

Posted by Jeremy Shatan at 10:14 AM No comments: