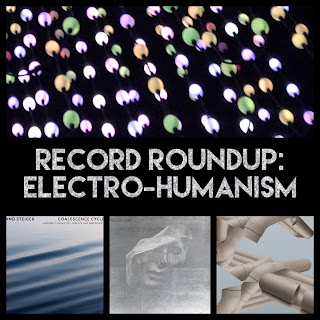 I can still connect to the feeling of holding the future in my hand when my father handed me a record featuring Helices, a work composed by his old friend Manny Ghent for violin, piano and prerecorded tape. “Of course!" I thought, "Putting acoustic and electronic instruments together is not just for rock music!” Hey, I was young. One thing I didn’t consider, however, was the inequality between instruments that had been developed and perfected over centuries and ones that were only a few decades old.

But I think we can safely say that rapid innovation has fairly well erased any level of sophistication between something made of wood and activated by air or vibration and something that needs software or recorded sound to work. Or at least that’s what these three records would have me believe, all electroacoustic masterpieces that should make a believer out of you as well.

Rand Steiger/International Contemporary Ensemble - Coalescence Cycle Volume 1: Music for Soloists and Electronics That long title gives you the basics. I could add that there are five pieces here, all except one featuring a single player in combination with audio signal processing. I could throw around terms from Steiger’s liner notes like “virtuosity” and the “intersection of tempered and just intonation,” but in the end, it’s all about sensation and emotion. For the first, there’s the almost tactile nature of the electronic sounds, rich and rounded clouds surrounding clarinet, flute, cello, piano and bassoon, all so perfectly played and recorded that you will feel their physical presence. Miller Puckett, Steiger’s longtime collaborator who writes the software, deserves special mention here, as do the musicians of ICE: Joshua Rubin (clarinet), Claire Chase (flute), Kivie Cahn-Lipman (cello), Jacob Greenberg (piano), and Rebekah Heller (bassoon).

As for the emotion, Steiger’s command of harmony and melody is so finely calibrated that it seems to have a direct connection to my inner state, allowing me to engage on a visceral level. Translation: these five pieces sound fantastic and make me feel all kinds of ways. Regardless if your experience of processed sound comes from Brian Eno or autotune, I think you will agree. And the best news is that Volume 2, featuring the same techniques applied to larger ensembles, is already in the works. If you can’t wait, make sure to revisit A Menacing Plume, Steiger’s superb album with Talea Ensemble from 2014.

Daniel Wohl - Etat In 2013, I called Corps Exquis, Wohl’s debut, “jewel-textured and compulsively listenable” while including it in my Top 20. But I was left cold by the follow-up, Holographic, which was accomplished but lacked a certain spark. Not so for Etat, which maybe as close to a pop album as we get from this furiously inventive sonic architect. Y Music and the Calder Quartet are here to expertly actualize the acoustic elements, but Wohl’s most important collaborator this time around might be Ryan Lott, who co-produced Etat with Sae Heum Han, an electronic composer who works under the name mmph. Lott, whose art-rock project, Son Lux, is occasionally radio-adjacent, is wise in the ways of shaping both songs and sounds.

Corps Exquis had already proved that Wohl could combine the organic and synthetic seamlessly, finding a perfect realization for his emotion-laden compositions. Etat finds him delving deeper into modern production techniques and at the same time becoming yet more soulful. Concision is a factor here, too, as each piece is short and self-contained, reminiscent of the classic work of Wohl’s countryman, Erik Satie. There's also some of the epic feel of Vangelis's work for the original Blade Runner - if they make another sequel, Wohl might be the man for the soundtrack. There’s even a "single" in the form of Angel, which features Channy Leaneagh, the vocalist for indie-pop group Poliça. But a track like Melt proves Wohl doesn't need words to get under your skin, which this remarkable album will do immediately when it comes out May 31st.

Drinker - Fragments The main organic ingredients on this moody song cycle are Aaron Mendelsohn's voice and guitar, which are surrounded by all manner of rich electronic textures, from percussion and handclaps to sleek keyboards and bass. If you've been following closely, you'll note that I've been tracing Mendelsohn's muse since 2013 when I discovered his band Isadora, who were for a time one of NYC's best live bands. While Mendelsohn moved to California after Isadora dissolved, he had already begun collaborating with Ariel Loh, a New York-based electronic composer and producer (Yoke Lore is one of his projects), and they soon formed the group Drinker. Singles have been coming out since 2017, including the excellent Which Way Is South?, but Fragments is their first album.

While California is often associated with sun and sand, Mendelsohn's songwriting is more attuned to its moonlit alter-ego, the LA of Riders On The Storm rather than Good Vibrations. Massive Attack's slightly bruised majesty is also in the mix along with a subtlety that seems drawn from bossa nova. Just watching Mendelsohn's restraint as he sang some of these songs at the album release party a few weeks ago had me thinking of Frank Sinatra's work on the Sinatra/Jobim album, where he had to tone down his brassy quality - and that of the band - in order to find a new mode of expression. Sinatra's imprecations to the trombone player to soften his attack had the musician complaining "If I played any softer, I'd be blowing out the back of my neck." Mendelsohn seems to have achieved that on some of these songs, with Follow, in which he finds new falsetto contours in his voice, a perfect example.

The link between Drinker and Isadora is Mendelsohn's innate melodic talent, an ability to create songs where the music pulls you through the narrative as much as the words. In Loh he has found an ideal collaborator, someone who can push songs into unexpected directions that, after a few listens, seem inevitable. He and Mendelsohn also know when to layer sounds and when to strip everything back to a single instrument, techniques from dub and remix culture that keep the songs feeling fresh even as they become familiar. While Fragments is somewhat austere, it's also suffused with a deep humanity, delivering on electronic pop's promise to combine man (or woman) and machine in a way that adds new dimensions to both. A remarkable debut. 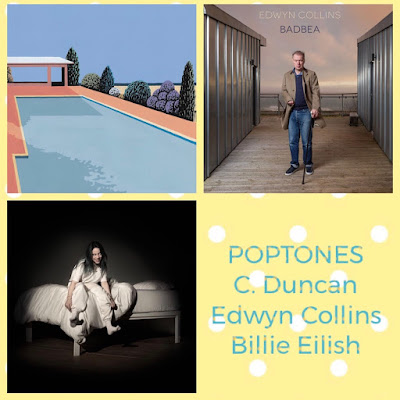 There’s music almost scientifically designed to be popular, with little other reason for being. And then there’s music that uses the techniques of pop music for some form of personal expression. It’s the latter type that moves me and here are three recent albums that exemplify its virtues - and one of them happens to be VERY popular.

C. Duncan - Health The third album by this Scottish singer-songwriter finds him doubling-down on the more electronic textures of The Midnight Sun, the follow up to Architect, his Mercury Prize nominated debut. While I still love the elegant folk-pop of the first album, which cast an hypnotic spell similar to Fleet Foxes and Radiohead, the gossamer delights of Health are undeniable. While even more synthetic than Architect, the production is richer than Midnight Sun, with a depth and polish to every sound. Plus, the tunes are catchy as heck, with choruses that wend their ways into your life long after the album ends. While Duncan doesn’t employ their lyrical acuity, the intricate bounce of Scritti Politti and the bright swing of Gaucho-era Steely Dan are obvious referents, which only makes me love Health more. This is artful pop music that should be more popular than it is - make it so by listening ASAP.

Edwyn Collins - Badbea If the words “Scottish singer-songwriter” above didn’t cause the Edwyn Collins synapse to fire in your brain, I recommend a remapping. You could start with Orange Juice, present at the birth of indie with classics like Rip It Up. Or you could fast forward to A Girl Like You, the worldwide smash that has likely kept Collins in a certain comfort, especially after his life and career were interrupted by two nearly fatal strokes in 2005. In the six years since his last album, Collins and his indefatigable wife, Grace Maxwell picked up stakes, moved to the north of Scotland and built a new studio, unearthing some old lyric books in the process. Taking inspiration from his younger self has helped Collins make the most confident and compelling album since his recovery began. Just listen to the wicked fun he has wielding the lowest depths of his baritone during the breakdown of In The Morning, a moody stomper ripe for remixing. Dance music has always been an arrow in his quiver and it’s a delight to hear him employ it again on that song and others, like Glasgow To London, a flashback to the early days of Orange Juice. He also looks back more reflectively in I Guess We Were Young, creating a new folk standard in the process. But in the end, it’s the brash sense of forward motion and sheer gusto makes this album such a joy. If you want some of that in your life, look no further.

Billie Eilish - When We All Fall Asleep Where Do We Go? As I mentioned in a recent issue of Off Your Radar, the fact that Eilish once appeared on YouTube with a ukulele caused me to put her in the “to be ignored” file. And I was doing a good job of that until the serious hype around this young singer-songwriter turned into a genuine buzz - then I HAD to listen. And I’m glad I did! What we have here is a protean talent who has put together a batch of electronic and hip hop-inflected pop songs for the ages. Her key collaborator is her brother Finneas O’Connell, who produced the album and filled it with all kinds of unique sounds, creating a canny blend of the organic, acoustic and synthetic. He even makes the ukulele work!

But the songs are the stars. The fact that her mom said some of them remind her of Kurt Weill gives a sense of the home environment that helped nurture Eilish’s musical interests. And mom is right - there’s a sense of Weimar darkness here that suggests someone who has not only played with fire but been burned more than once. Whether you call Eilish an old soul or just a 17-year-old who feels things more acutely, there is real emotional depth here, especially in songs like the post-goth Bury A Friend or the stark introversion of I Love You. She uses her voice in all kinds of quirky ways, but it somehow avoids feeling mannered, and you soon realize what a rich, expressive instrument she has.

Part of her artistry is the way she keeps those emotions brilliantly at bay with lyrics which can graze a sophistication that Cole Porter would recognize, as in Wish You Were Gay: "To spare my pride/To give your lack of interest an explanation/Don't say I'm not your type/Just say that I'm not your preferred sexual orientation." But even before I discerned what she was singing about, the sheer melodic and sonic interest here grabbed me from the start. When I was caught by surprise by You Should See Me In A Crown in an episode of Hanna, I was struck by the extent to which Eilish had quickly colonized my brain, the way the best pop music does. While its hard to figure out where she goes from here, with hundreds of millions of Spotify streams and YouTube views (not to mention a rabid Instagram following), but as long as she keeps it personal and lets Finneas do his thing, I think we'll be hearing from Eilish for a good long time.

Find tracks from these albums and keep up with what's coming next in this playlist.

Posted by Jeremy Shatan at 6:54 PM No comments: