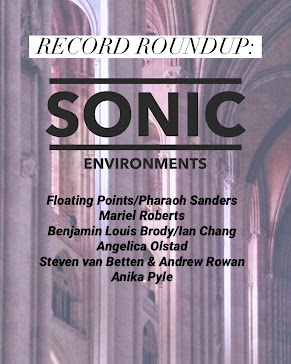 All of the recent albums below succeed at creating complete environments, whether through music alone, or the combination of words and music. Each one blends genre as well, occupying new overlaps between classical, jazz, electronic, industrial, folk, and pop.

Listen along to excerpts here or below - and if you like something, head over to Bandcamp to support these artists.

Floating Points, Pharaoh Sanders & The London Symphony Orchestra - Promises Some records you listen to, others you seem to enter into, like a space you can explore. This extraordinary collaboration between composer and electronic musician Sam Shepherd, who performs as Floating Points, and the legendary sax player is one such album. This impression that was likely enabled by the "non-visual" preview hosted by Luaka Bop about a week ago. Along with a password-protected link we were given instructions to dim our computer screen and do whatever was necessary to eliminate distraction from the experience. I didn't need to be asked twice. I entered the password, put on my Grado headphones, pressed play, closed my eyes, heard the opening tone cluster...and was off, traveling in the labyrinth of my mind. Besides that cluster, played on Shepherd's synth or a combination of keyboards and repeated with variations, Sanders' commanding reed playing was my guide, along with the strings of the LSO, at times ruminative and at others, sky scraping.

Considering the rich journey the nine-movement work takes you on, 46 minutes seems concise, with Shepard giving his imagination free rein, yet not being indulgent, like an epic novel where not one word is wasted. Intersecting with ambient music, space rock, spiritual jazz, and even the symphonic works of John Luther Adams, Promises feels like a big tent where people from many musical tribes can gather and find common ground. When I included Floating Points' second album Reflections: Mojave Desert on my Best Of 2019: Electronic list, I noted its "slow-burn intensity that is consistently involving," and remarked that "Shepherd remains an exciting talent, however, and I am sure there is more to come from him." While his last album, 2019's Crush, failed to fully excite me, Promises not only proves me right but serves as a coming out party for Shepherd as a composer and as someone with a vision far beyond the confines of a single genre. As for Sanders, who recorded his parts at age 78 or 79, he sounds completely at home in Shepherd's sound world, vigorous, exploratory, and emotionally engaged. If this turns out to be the capstone of his legendary career, it will not only honor his roots with John and Alice Coltrane, but stand alongside them as a remarkable recording on its own. I needed this in 2021 and I think you will, too.

Mariel Roberts - Armament Like any instrument, the cello is a sort of technology, and one which interfaces with other equipment remarkably well. So much so, that for long sections of this brutal yet engaging collection of improvisations, you will be forgiven for forgetting there's a cello involved at all. Roberts, a co-director of Wet Ink Ensemble who also plays with the International Contemporary Ensemble and the Bang On A Can All-Stars, among others, is a virtuoso at anything she chooses to play. Here she explores a dark view of our current environment, one in which she notes, "so much culture is being weaponized, turned into instruments of violence," by doing the same to her own instrument. Until the final lines, which almost provide the comfort of a Bach sonata, this is more the landscape of lifeless planets roiled by storms of unimaginably destructive power, an arena of texture and tone more commonly explored by the likes of Tool, Killing Joke, or Lou Reed's Metal Machine Music. A kindred spirit would also be Mario Diaz de Leon, who often brings black metal into his classical compositions (and vice versa). Whatever your point of reference for the sounds Roberts conjures from her cello and some pedals, don't be surprised if you find yourself reveling in the grind and gleam of these brilliant soundscapes.

Benjamin Louis Brody/Ian Chang - Floating Into Infinity There's some fascinating gear-head detail behind the making of this album, which involves compositions by Brody played by Chang (also the drummer in Son Lux and Landlady) on a kit that's been converted into a "hyper sensitive sampler," giving him the ability to put some physicality behind the creation of electronic sounds. But that all melts away for the listener, who can simply sink into these starlit microcosms without a thought as to how they were made. While there is a bit of percussive drive to Modum, along with dramatic pounding keyboards, these are mostly contemplative pieces, made for scoring a session of staring at the clouds through rain-streaked glass. Sometimes conveying a slippery unease reminiscent of Harold Budd's Lovely Thunder, this music s not always comforting, however, but it is consistently gorgeous and full of invention and adventure.

Angelica Olstad - Transmute One could imagine a quarantined Erik Satie making a recording like this EP, only instead of deconstructing Fauré, Griffes, and Ravel, he would take on his own music, and combine it with field recordings, as Olstad did, including bird calls, sirens, and the shouts of protesters, as a way of soundtracking our current experience. Olstad also shares some of Satie's taste for melancholy, but her concision and inventiveness keep things from getting too much so. Transmute invites you into Olstad's apartment as much as her mind, working as both a pause for reflection and a musical collage of recent history.

Steven van Betten & Andrew Rowan - No Branches Without Trees While this album of chamber folk is often delicate, it's anchored in the sturdy drawing-room hymnals of the string quartet arrangements. Although it hints at some of the emotional landscape of something like Beck's Morning Phase, these songs are more like short stories than memoir, with the narrative distance that implies. There's also a bit of a scrapbook feel to what songwriter van Betten and composer Rowan have put together here, with short instrumentals among the more proper songs. A brief, yet lovely album that leaves me to hope they pursue further collaboration.

Anika Pyle - Wild River Scrapbook, collage, memoir - along with chamber folk and electro-pop - are all folded into this intimate and revealing collection of songs and spoken word, the first solo album from a longtime linchpin of the Brooklyn-Philly pop-punk axis. Delving into deep emotions following the loss of her father, Pyle has pushed her artistry into territory unexpected enough for her that it feels like we're meeting someone new entirely. Her abilities as a writer also keep poems like The Mexican Restaurant Where I Last Saw My Father from being overshares, pulling from the personal to the universal to create something starkly moving, which is true of the album as a whole. A real gem.

Since this is an eclectic roundup, you can also find tracks from all these albums in this playlist along with everything else I'm tracking in 2021.

You may also enjoy:
Collapsing Into Nordic Effect's Raindamage
Witness The Ritual: Music of Pierluigi Billone
You Will Believe: Helga Davis's Cassandra

Posted by Jeremy Shatan at 3:59 PM No comments: 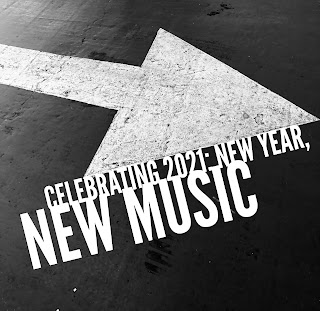 Like a drone in the intro to Painting With John (essential viewing, btw), I have flown free of 2020's music only to crash in a dense thicket of 2021 releases. And it's not that I haven't been listening, it's that I've been listening to SO MUCH. Where to begin? For this first post, I'm going to wend my way instinctively through what has captivated me the most for a multi-genre celebration of the year so far. I'll catch up with more later!

Tak Ensemble - Taylor Brook: Star Maker Fragments “All this long human story, most passionate and tragic in the living, was but an unimportant, a seemingly barren and negligible effort, lasting only for a few moments in the life of the galaxy." Only the most arrogant among us would argue with this sentiment from Star Maker, the 1937 science fiction book by Olaf Stapledon that provides the basis for this latest gem from Tak and Brook. But I will say that if this "barren and negligible effort" we're all living through includes sublime art like this album, I'm good.