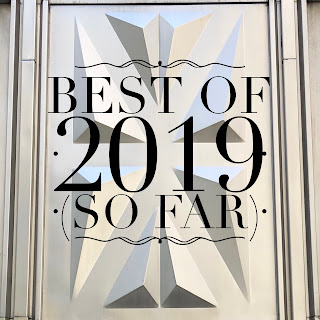 These lists are hard because I feel that everything I’ve written about this year is among the best music of our times. And there are also some things I’m sure are excellent but haven’t had the chance to really listen to. To all the composers, musicians, bands, ensembles and labels who have shared their creativity I say, paraphrasing Pusha T and Rick Ross: I got you - hold on. Still, it is undeniably interesting to take stock at the year's halfway point and note either what I’ve listened to a lot but haven’t yet covered or to acknowledge a few very recent releases that have quickly muscled their way into being essential. You’ll see some of both below in a list of the 25 albums that have helped get me through 2019 so far. Enough of my yakking - on with the show!

Note: If I’ve covered the album in a previous post, just click the link to read my thoughts.

9. Thom Yorke - Anima
I haven’t yet watched the film Yorke made with Paul Thomas Anderson to accompany this album, but such is the intimacy and intrigue of these tracks that I get the sense that Yorke knows the biggest screen of all is on the interior of our foreheads. While using many of the same lushly minimalist textures as his first two solo albums, there is a warmth and emotional generosity to these songs that feels new, even if rooted in the more plain spoken parts of A Moon Shaped Pool. I would hesitate to call any work by this consummate artist “revealing” but I will say that he’s letting us in on another aspect of his talent and that is more than enough.

10. Empath - Active Listening: Night On Earth
Seeing this young Philly band live at Pioneer Works last month only served to solidify my feelings about how great they are. While their music, full of distorted guitars, shiny synths and driving rhythms can be brainy and fractured, witnessing their utter joy as they bounced around the stage was a minor miracle and helped me connect to that lightness of being on the album. While there are no left turns from their previous releases, there’s also a greater focus on craft when it comes both to the song-like parts and the sparkly excursions into ambience. Right here is the sound of a group hitting its potential across all metrics. Grab on to the album and catch them in concert ASAP.

12. Billie Eilish - When We All Fall Asleep Where Do We Go

15. Boogarins - Sombrou Dúvida
In which the boys from Brazil go further down the studio rabbit hole, constructing collage-like tracks that go some distance from their jammed out stage show. But the tunes are still there, maybe a bit buried but characteristically sweet. Following the development of this band has been a true delight and I hope to see how they work with this material live when they hit the rooftop at Industry City on September 4th with Mdou Moctar - a killer bill to end the summer!

16. Freddie Gibbs & Madlib - Bandana
Gibbs made hay with Madlib on Piñata in 2014 and nothing he’s done since has hit the same heights  - until now. Something about working with one of the great producers of all time brings out the best in Gibbs, who, instead of deferring to a legend tries to meet him halfway. As Gibbs himself noted: "I feel like you gotta bring your 'A’ game to really shine on his beats, or his beat is going to outshine you. It’s definitely a challenge. You can’t just come any kind of way on these beats, you gotta really make a marriage to ‘em and live with 'em." So, instead of coasting on his grittiness, Gibbs dazzles with a flow that hits a variety of tempos and mixes up the content with political observations and street lit. He shines when he gets personal, too, as in Situations: "1989, I seen a ni**a bleed/Uncle stabbed him in the neck and hit his knees/Turned the arcade to a stampede/I was playin' Pac-Man, Centipede/Put me on some shit I never should've seen." He also has the guts to share the mic on Palmolive with Killer Mike and Pusha-T, who both come loaded for bear, making it one of the great posse cuts of recent memory. I don't know the logistics of the hook-up between Gibbs and Madlib, but I sure hope it happens again because Bandana is a classic.

17. Mark de Clive-Lowe - Heritage and Heritage II
I will admit to following the career of MdCL for years with admiration for his skills as a keyboard player and producer without being entirely sure exactly what he does. Sure, he was always in the hippest place at the hippest time, but who was he? It all comes into focus on these two extraordinary albums of expansive jazz-funk. The “heritage” referred to is MdCL’s Japanese roots, with each track’s title drawn from cultural reference of importance in his life. Hence we get tracks like Memories of Nanzenji, inspired by a 13th Century temple in Kyoto, and Akatombo (Red Dragonfly), based on a popular folk melody his mother used to sing to him. The music is sometimes spacey and drifting, at other times knotty and propulsive, often building up a head of steam after a moody start. The minor key melodies and overall gloss can't help but remind me of Steely Dan, in a welcome if distant echo. Everything is driven by the sensitive and powerful drumming of Brandon Combs, with strong contributions also coming from Josh Johnson (sax/flute), Teodross Avery (sax), Brandon Eugene Owens (bass), and Carlos Nino (percussion). But MdCL is the star, doing stellar work on all manner of keyboards and composing all the tracks, in a triumph of imagination and sheer musicianship. Now I know exactly who he is and what he does and I can't get enough of it.

19. Baroness - Gold & Gray
In the four years since the release of their last album, Purple, which found the metal band incorporating a new rhythm section after their bus accident, they have had yet more personnel changes. Peter Adams, who had been their lead guitarist since 2008, left to concentrate on his other band Valkyrie (among other things) and was replaced by Gina Gleason. She's had a checkered career, from Cirque du Soleil to bands that covered Metallica (Misstallica!) and King Diamond. As worrisome as that may sound, she has more than enough grit in her glamour to complement the playing of leader John Baizley while engaging in furious interaction with bassist Nick Jost and drummer Sebastian Thomson. She may have also helped push the group to further diversify their already broad palette of sound, adding a cleaner vocal dimension to the harmonies in the process. Whatever the reason, Gold & Gray is the most high-contrast album of their career, with glassy vignettes like Crooked Mile smash-cut into absolutely scorching cuts like Broken Halo. It's a head-spinning journey that feels somehow cleansing, with their most beautiful textures constantly being obliterated by some of their nastiest. While the emotions are always strong, the heart of the album is probably three songs near the middle: Anchor's Lament, Throw Me An Anchor, and I'd Do Anything. Given that the chorus of the last is "I'd do anything to feel alive again," it's obvious the near-death experience of the accident is woven into the core of Baizley's artistic expression forevermore. Whatever he needs to do to work out his grief, he's surrounded by stalwart companions and giving so much of himself to us listeners that it's easy to be humbled and grateful as you stand in awe of Baroness's rock majesty. Long may they reign.

21. Crumb - Jinx
This Brooklyn via Boston band amassed a rabid following (including me) on the basis of two EP's of wobbly psych-funk so anticipation has been running high for their debut album. Jinx continues to deliver on their addictive style; if anything it finds their grooves ever more precise and their melodies more engagingly serpentine, adding up to a series of transporting tunes. At under 30 minutes, the trip may still be too short, but it's one you'll want to take often. Also, they stretch out in concert - catch them for free on August 8th in NYC.

22. Car Seat Headrest - Commit Yourself Completely
I've been yammering on about what a great live band this is since I saw them in 2017 and now here's recorded proof! Even though these nine songs were recorded in seven different spaces, it feels like a coherent document of their dramatically dynamic approach to Will Toledo's conception of post-alternative indie rock. Even the shorter songs are full of epic vibes and their mastery of the slow build only adds to the cathartic feels when they hit full throttle. All of the songs save one come from Teens Of Denial (2016) and Twin Fantasy (2011/2018), which means they're drawn from Toledo's strongest material. One could quibble about the omission of Unforgiving Girl (She's Not An), which was one highlight of the show I saw. The one cover, of Frank Ocean's Ivy, is great but maybe not as revelatory as their take on Bowie's Teenage Wildlife, an interpretation that blew me away in concert. Minor details. This is a fantastic album that will have you jumping up and down as you play it at maximum volume. Your  neighbors might complain - or knock on your door to join you. P.S. Keep an eye out for a tour date near you.

Listen to a track from all of these albums in this playlist or below. Any of these on your list?