Record Roundup: On The Cutting Edge 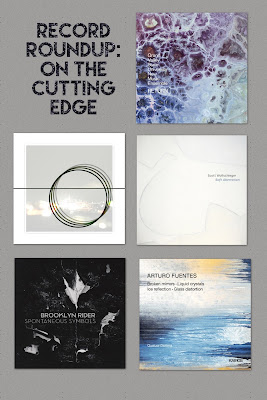 The idea of "progress" in music is a bit amorphous. One description of it might include music that reflects the current state of society and the sonic universe of the time in which it was created. This would have us recognize both musique concrete and hip hop as "progressive" for reflecting industrial and urban realities in a way that was new at the times they arose. But there's also the fact that, once introduced, even the edgiest sounds can become fodder for generations of artists, leading to modern or "new music" tropes that are maybe not so modern or new - but they can still sound fantastic and challenge our ears. Below find five albums that are either on the cutting edge of musical progress or that sound "new" even if they draw on the modernism of earlier eras.

Grand Valley State University New Music Ensemble  - Return Saul Steinberg's famous New Yorker cover showing a supposed void between America's coasts should be redrawn with a giant neon sign pointing to Allendale, MI, where this estimable band has been plying its trade since 2006. Even more astonishing than their excellent performances of canonical pieces like Reich's Music For 18 Musicians or the works they have commissioned over the years is the fact that the program, under the direction of Bill Ryan, is churning out composers to reckon with at an alarming rate.

It all comes together on Return, featuring electro-acoustic music written by three GVSU grads, Adam Cuthbert, Matt Finch and Daniel Rhode, who together founded slashsound, an "experimental" music collective. While the three composers all get individual credits among the 15 tracks on offer, the sound of the record is so cohesive that you don't think much about who wrote what. They also used the time-honored "write-record-cut-paste" method where the final product is the result of further manipulating sounds laid down in the studio and assembling them into the works we hear here. This means that the personality and skill of the players is not something you're very aware of, although I don't doubt that these are all excellent musicians.

So where does this leave us? With 15 gorgeous selections of music at the intersection of ambient and minimalism, where repeating patterns may devolve into washes of sound or bold chords, and where a mechanical pulse may underlie soaring stardust synth before resolving into a drone. Like the best of Brian Eno's instrumental music, your attention can dip in and out at will with no loss of satisfaction. Return is a consistently immersive listen but if you want to sample try location sharing, with its commanding thrums, or dearest rewinder these, which moves through overlapping patterns, some quite Reichian, and resolves into gleaming, triumphant keyboard chords that wouldn't sound out of place on the new Beck album. Good show, GVSU!

Phong Tran - Initiate This first album by recent NYU grad (he studied with Michael Gordon) Tran was released by slashsound’s label and definitely fits their aesthetic. Tran, however, is exploring the use of “minimal source material” and composed the work using only homemade synthesizer software. But there’s still more than enough variety in texture and tempo in the seven movements to keep you interested. What really keeps you riveted is the narrative structure and urgency. Tran was inspired by “the story in every story” theorized by Joseph Campbell’s Hero With A Thousand Faces and as applied to the enormous life changes going on for him and his family and friends. Of course, the mind movie you create while listening will be your own - get ready to watch it in IMAX.

Scott Wollschleger - Soft Aberration This debut album of angular chamber music showcases a composer so steeped in the European avant garde that neither Schoenberg, Berio or Boulez would have trouble connecting to what he’s doing here. But it’s rare that you hear such command of structure and orchestration in any idiom. Some of that may be a result of the fact that each piece was commissioned by its performer(s) and conceived with their specific talents in kind. The first piece, Brontal Symmetry, has wit, melody, and plenty of spice, doled out in digestible bits. Created from scraps unused in earlier works, it’s an ideal introduction to Wollschleger’s talents. The recording by Longleash, a trio comprised of Pala Garcia (violin), John Popham (cello), Renate Rohlfing (piano), sets a very high bar with their commitment and surprisingly light touch.

Popham is also heard in the threnodic America for solo cello, which he dispatches as though the ink were drying on the score. But with the great pianist Karl Larson on board with violinist Anne Lanzilotti in the title piece, and the Mivos Quartet closing the album with the spectral White Wall, there was never going to be any let up in quality. Wollschleger’s astonishing grasp is further demonstrated by perhaps the most challenging piece here, Bring Something Incomprehensible Into The World, a three movement work for soprano (Corinne Byrne) and trumpet (Andy Kozar). With both musicians pursuing extended techniques with style and even levity, it more than lives up to its title, and wonderfully so. Far from an aberration, this album is the sound of someone firmly planting their flag at a thrilling elevation. More, please. P.S. Keep an eye on upcoming performances of Wollschleger's music, including Larson in the complete piano music on November 20th.

Brooklyn Rider - Spontaneous Symbols A new album from this expert quartet is always cause for celebration, and this album of 100% premiere recordings may be their finest yet. The five pieces here cover a lot of ground, from Tyondai Braxton’s ArpRec1 - two brief and busy movements created using generative software - to Kyle Sanna’s ruminative Sequence For Minor White, which pays tribute to the great photographer over 20 searching minutes.

The quartet is enhanced by some tinkling chimes at the end of Sanna’s piece and also by electronics in Paula Matthusen’s on the attraction of felicitous amplitude. The additional sounds are treated recordings made in an ancient Roman cistern and the short piece is as mysterious as that would imply. Evan Ziporyn, a founding member of Bang On A Can, knows something of field recordings, but his Qi is probably the most straightforward work here. Featuring three dynamic movements filled with lyricism and driving rhythms, Qi also shows a real mastery of arrangement as the stings pair off in different combinations or take soaring solos against a backdrop of the other instruments.

The last work to mention is BTT, composed by Colin Jacobsen, one of Brooklyn Rider’s violinists. Inspired by the idea of downtown Manhattan as a hotbed of the avant-garde, from the Velvet Underground to Glenn Branca, over 20 minutes it pursues a series of riffs that occasionally imply a rock backbeat before devolving into impassioned scrubbing or delicate pizzicato. There’s a narrative thrust to BTT, like a series of overheard anecdotes, or scenes from the window of a cab ride home over rain-slicked midnight streets, that makes it consistently fascinating throughout.

The recording, released on In a Circle Records, which is run by quartet violinist Johnny Gandelsman, is second to none, with dimension, clarity, and just the right amount of warmth. Brooklyn Rider are in the midst of an international tour that runs through June 2018. You won’t want to miss them if they come to your town.

Quatuor Diotima - Arturo Fuentes: String Quartets Is it truly impossible to find the bottom of the well of great string quartets and composers? It’s starts to feel that way when an album like this comes on the radar. Fuentes while still young, is 20 years into a career that is all news to me - and maybe to you, too. I was also unfamiliar with Diotima, which was founded in 1996. This is the first recording of these four quartets, however, which were all composed between 2008 and 2014, so at least we’re caught up on that front!

The titles of the substantial single-movement works here would suggest that they all occupy the same sound-world - and they do. It could even be said that Broken Mirrors, Liquid Crystals, Ice Reflection and Glass Distortion are all movements in one meta-quartet or even a symphony for four strings. The thin, wiry sounds of heavily angled bows on high strings thread their way through each piece, along with harmonics and slightly shredded bass strings, giving the impression of an almost constant fragmentation, like a kaleidoscope that will never stop turning, pieces that will never cohere.

There’s an almost mimetic quality to these absorbing works, too, with the mirrors, crystals, ice and glass referred to in the titles coming to life in your mind’s eye as you listen. While occasionally discomfiting, there is also an elegance to Fuentes’ writing, with a recognition of the characters of the instruments that seems to run very deep. I also can't help hearing harmonization with the icy, scrabbling textures on Nordic Affect's Raindamage - if you liked that, this will be right up your alley. From my brief traverse of his other recorded works, this album is as good an introduction as any to an exciting composer who is sure to only grow in stature.

Selections from these albums and others in this zone can be found this playlist. Click “follow” if you want to keep in touch with what is still to come in 2017.