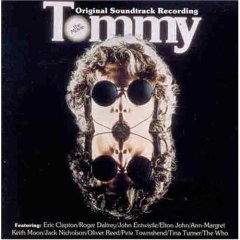 Thanks for coming back. Here's where the madness began.

I would lie in my bed, listening to to my knight's-helmet-shaped AM radio, waiting for my favorite songs. I became obsessed with Elton John's version of "Pinball Wizard" and somehow it dawned on me that if I owned the record I could listen to it whenever I wanted to. One day when my mom was going downtown I scraped together a few dollars and asked her to stop into Sam Goody and pick up the Tommy soundtrack album.

I could barely concentrate all day, waiting for her to get back home.

Before I knew it, she was back and I was putting diamond to vinyl. Next, I experienced that sinking feeling that all record buyers have felt and try to avoid: the realization that you bought an album with just one good song. Damn - burned on the very first try! No matter how hard I tried, I just couldn't get into the songs featuring Tina Turner and Eric Clapton - not to mention Oliver Reed and Ann-Margaret, who appear on an astounding 12 tracks out of 31!!

And then, to add insult to injury, my little knight's helmet played me the ORIGINAL version of "Pinball Wizard" by The Who, which was obviously far superior. Clearly, this record buying stuff was more complicated than I had thought.

That was in 1975. For my birthday in 1976 I got my very own Realistic turntable and speakers (dad loved Radio Shack). My sister Jessica gave me three 45's: "Devil Woman" by Cliff Richard, "Magic Man" by Heart, and a reissue of "Got To Get You Into My Life" with "Helter Skelter" on the flip side, released to promote the Rock'n'Roll Music compilation. I loved having the little singles - I could put on my own AM radio show with just my favorite songs. I just needed more vinyl - lots more vinyl... 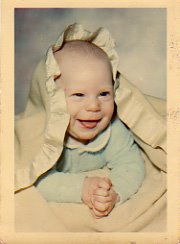 Where I'm Coming From

On the eve of my birthday, I thought I would give a little background on why I started anearful. I created this blog to give readers an earful about music, pop culture and anything else on my mind. Though my publishing schedule has been somewhat erratic, I hope my passion for music, voracious hunger to hear everything, and the knowledge I've acquired in 30 years of music buying has proven valuable to my readers so far. Many of my friends insisted I share my thoughts in a blog - maybe so I'll stop giving them "an earful" at every possible occasion! Their loss - your gain.
So you know where I'm coming from

here is the start of a brief musical bio.

Part I - Before Record Buying

My first musical memory is second-hand. I was born in 1964 and my mom told me that she used to wake me for nursery school with a 45 of "I Want to Hold Your Hand" so perhaps I can blame my obsession on that early experience. It also set the stage for much of the '60's for me as those years were all about the Beatles. My parents bought each album as it came out. Some they left in our country house in the Berkshires. To this day when I hear "Things We Said Today" or "Norwegian Wood" I can see and smell the pine-paneled living room up there where the records used to drop from the Realistic changer.


While the main investment my parents made in music during my childhood went to classical music - Beethoven, Bach, Mozart, etc. - they embraced the '60's and, in addition to The Beatles, loved Dylan, Simon & Garfunkel and other avatars of the decade. When I went through a huge Yardbirds phase in high school, my father was quick to remind me that he was the first to bring a Yardbirds record into the house.

But like practically everyone else in my generation, I was introduced to so many facets of music by the Fab Four. From them I learned music could be fun, sad, silly, funky, scary, and as seemingly simple as walking and as complex as the neuro-muscular system that makes walking possible.

The Beatles also brought us all together. No one in our family of six objected if one of their albums were playing. To me they represent the power and possibility of music in all its glory.

Other sounds made an impression in those early years. We used to go see Pete Seeger at Tanglewood. Besides his classics, he sang a song called "Garbage" which was mainly written (I now know) by Bill Steele. The chorus went something like: 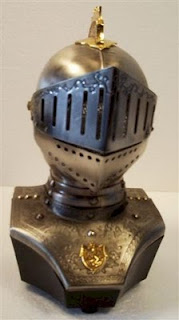 The proto-environmental theme went right over my head - all I could think was "He's singing about garbage! Cool!" Can you imagine a better song for a six year old?

I was also taken to see The Band around 1969 at a place near Lenox, MA called Music Inn. While this is mostly another second hand memory, I recall seeing one of our red plaid wool blankets on the green grass and over there somewhere some people were doing something on a stage. I can only imagine that some other, deeper impression was being made.

In around 1972 or 1973 my musical world widened beyond The Beatles when I was given an AM radio in the shape of a knight's helmet. Some of the songs that made a real impression on me were:

In fact, I even made my brother Greg, who's six years older than me, take me to Tanglewood to see Seals & Croft. I knew no other songs by the soft-rock duo and spent most of the concert waiting for the hit. To this day I hate the tactic of making the audience wait the whole concert for the hit. Put it in the three or four spot. If you're putting on a good show, no one's going to walk out because they already heard the hit!

I still listen regularly to two of the songs listed above - guess which ones in the comments box!