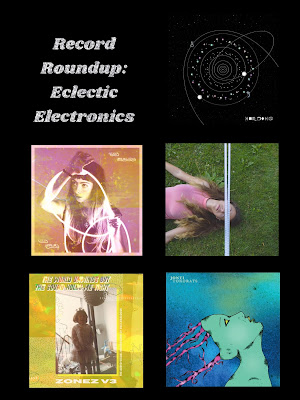 My musical diet includes a large helping of albums that are based in synthesized sounds - here are some of the tastiest finds from 2017.

Novelty Daughter - Inertia Faith Harding has been in my personal pantheon of unsung heroes since I caught her opening for TV Girl a few years ago. She could do literally anything with her extraordinary voice and it would be instantly compelling. Her instrument has the timbre of a smoky jazz chanteuse and she wields it with the exquisite control of someone who specializes in avant-garde art song. Combine that with the lapidary settings she contrives on her laptop and the results are sublime. However, the most original thing about Novelty Daughter is the way she puts melodies and musical structures together in counterintuitive ways that end up feeling so right.

Her first album, Semigoddess, was a terrific showcase for the way she never takes the easy way out, with soaring melodies pushing against the pulse of the backing tracks in a cerebral approach to emotional explorations. Inertia finds her embracing more dance rhythms on several songs, produced with her usual elegance and attention to sonic detail, as if seeking to be transported out of the difficult feelings and situations that come with living life fully. On Grown, for example, she lets the music draw the conclusion that if you can’t go home again, “put your chin up” and dance till dawn. U Want What I Want borrows a little drum’n’bass busyness to sweeten the slightly bitter pill of the lyrics, in which Harding tries to reach common ground with her counterpart in what may be a failing relationship.

Kindness, Calmness puts skittering rhythms below meditative synth while Harding tries to come to terms with her own inability to find comfort when somebody treats her well: "Ease is hard to settle into/Paradoxically/Ease is hard to settle into/But I want to try/I'm ready." Harding's lyrics never let you forget there is a real person behind her towering musical intellect. On the title track, she does something new, breaking her usual cool reserve and singing with near abandon about wishing she could “withdraw into a haze, and write my absence as a burning question mark upon your skin.” Rather than a withdrawal, Inertia is further proof that Faith Harding is one of the most interesting artists around.

Elsa Hewitt - Peng Variations On this, her third album in 2017, Hewitt continues to establish herself as electronic doyenne of the first order. Superficially, she’s doing the same thing as Novelty Daughter (and many others), building beats and backgrounds on synthesizers and laptops and singing over them, yet the results are quite different and very much her own. She creates hazy atmospheres, made up of either ambient washes or interlocking fragments, with distant beats gently propelling the songs. One thing that distinguishes her from others in this musical space is her compositional craft, which she has been honing since she released the bedroom folk album Hotel Rosemary in 2008.

She often uses her voice as another instrument, repeating syllables to add another layer of melodic invention. When she does use words, they’re buried enough in the hazy atmosphere she creates to feel like an internal monologue. That fuzzy quality adds warmth and humanity to all the little electronic bits she painstakingly assembles to build the songs. There are also samples of cats and babies to put a little more fur, flesh and blood into the tracks. Woven into the mix are "cuts from a single event – a play written by four women and their one performance of it in the Yorkshire dales..." which adds intellectual intrigue.

If I were going to categorize Hewitt's three albums, I would say that the first, Cameras From Mars, is future pop, the second, Dum Dum Spiro, is almost purely ambient, and Peng Variations is the most daring, applying some of the principles of musique concrete by adding all kinds of extra-musical sounds into intricate sequences that cohere on repeated listens. There is still significant overlap on all three records and therein lies her style and personality - handmade, gentle, somehow empathetic. I think Hewitt makes music partly as an act of self-care, and the enveloping, immersive nature of her sound-world translates that compassion directly to you - and we can always use more of that in the world! Peng Variations comes out on December 8th - show you care by downloading it or by supporting her PledgeMusic campaign to release some of her music on vinyl.

Summer Like The Season - Thin Today This is a project of Summer Krinsky, a musician, singer, composer and producer who has been plying her trade in the Detroit area for a few years, including in Pocket Candies with the guitarist Sam Naples, releasing a full-length album, Caves in 2015.  You can hear some of Krinsky's dense approach to harmony and prog-fueled arranging in that band but it comes through with more originality and clarity in Summer Like The Season.

The title track of this four-track EP is a perfect example, starting with a layered and looped vocal phrase, over which she starts singing the main melody of the song in her warm, pliable voice. Drums kick in, pushing the song forward busily, electronics burbling underneath and then - thrillingly - sheets of tightly packed backing vocals swoop in, raising the hair on the back of your neck. After the bridge, she expands the envelope  with more layers of sound, but somehow out-of-phase, almost like driving past bridge stanchions with the window just slightly opened: whup-whup-whup. It's breathtaking, and the rest of the songs are nearly as strong.

I'm excited to see what comes next from Summer and also to catch up with Detroit happenings via Girls Rock Detroit, a nonprofit that is "dedicated to fostering creative expression, positive self-esteem and community awareness in girls, trans and gender nonconforming youth through music performance." They just released their first mixtape, which includes Thin Today and 15 other tracks from local artists. If there's anything else on there even half as good as Summer Like The Season, that will be quite a find!

Jonti - Tokorats I know this South African-born, Australia-based polymath mainly as someone in the background of a lot of dreamy sounds over the last few years, but this is the first time I've delved into one of his solo albums. Tokorats is his third full-length and apparently had a tortured gestation over the last five years - but you would never know that by the sonic delights contained within. Jonti also has some high-concept thoughts behind it, claiming that it documents "a five year spiritual journey," and that "every song is a conversation with all the good and unflattering reflections of myself..." That's all well and good - but it has little to do with the experience of listening to the album, which is fortunately far more buoyant than his ponderous thoughts would lead you to imagine.

Rather than an self-lacerating session of encounter therapy, Tokorats is more like a spa treatment for the mind, almost a 21st Century take on 1950s mood music, like that of Martin Denny. Burbling clouds of pretty sounds overlay gentle hip hop-infused rhythm tracks, vocal choirs exhale nearly-wordless melodies, a string section might swoop in like a troupe of ballerinas, somebody might contribute a rap or spoken word interlude (Odd Future's Hodgy is featured and Sampa The Great is also heard from) but nothing breaks the mood. Most of the songs are short, merely elements in the whole album, which is a concise 50 minutes.

Sleeping And Falling is probably the best stand-alone track, its multiple sections a miniature of the album as a whole. The open-eared influence of J.Dilla is everywhere throughout Tokorats, but the spirit of the thing is contained in Misto On The Moon's sample of Comment (If All Men Were Truly Brothers), the hymn-like ode to fellow-feeling by Charles Wright. If you're looking for something to sit alongside Cornelius's 90s classic Fantasma, or Dilla's Donuts itself, get Jonti on your shelf. Thanks to his richly imaginative musicality and generous heart, wherever you listen will be instantly bedazzled with rainbows and waterfalls.

Suzi Analogue - Zonez V.3: The World Unwinds But The Sound Holds Me Tight On the latest installment of her Zonez series of "audio moodboards," Suzi invites a few more guests than usual, featuring collaborators on six of the 11 tracks. But the ultra-rhythmic and sweetly melodic personality that defines her music is always at the forefront. In a way, having someone like dancehall singer JAX on the opening cut, NUMBA 1, is a signpost, pointing your ear to the Caribbean flavors embedded in the track, which might not otherwise be so obvious. Similarly, having a verse by DC-based rapper NAPPYNAPPA on Game/Change is a way of giving the nod to the influence of hip hop on Suzi's music.

Besides reggae and hip hop, Suzi draws on many traditions, including drum'n'bass, house, footwork, and even ambient, building her tracks from repeating modules of soft and hard sounds, including vocals, and interleaving them with the beats with the deft touch of a true virtuoso. She also demonstrates structural command through the concise journeys each song travels, like mini-trips through her imagination via the most scenic route possible. Her music is often busy in all the right ways, and she's also very prolific, making videos for nearly every song and branching out by scoring a short horror film called End Of Forever. This is promising direction for her as she conjures some truly hair-raising sounds out of her rig. Mica Levi should be looking over her shoulder!

Looking for more fascinating electronic sounds from 2017? Follow this playlist and find your joy.

Coming next: Bob Dylan gets sanctified.

Posted by Jeremy Shatan at 5:04 PM