Record Roundup: Past Is Present 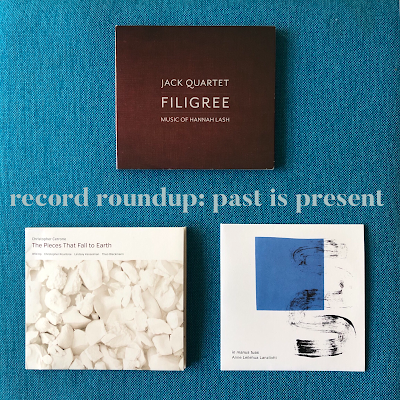 The albums described below are all linked by their dialogue between the past and the present. This may come via musical references or inspiration from literature, art, or architecture, all transmuted into something resolutely of our times by the composers and performers alike.

JACK Quartet - Filigree: The Music of Hannah Lash The durability of the string quartet never ceases to amaze me and with artists like Lash and the JACK perpetuating the medium it should be around for centuries to come. The album hits the ground running with Frayed, which brilliantly employs extended techniques to sound like it’s literally coming apart as you listen. Suite: Remembered and Imagined engages with Baroque dance rhythms across its six short movements, using Lash’s inventiveness to remain relentlessly modern. The title of Pulse-Space may make you think of a Pink Floyd outtake, but is instead a threnodic outpouring of pure emotion, with only Lash’s restraint keeping it from neo-romanticism. Inspired by Medieval weaving techniques, Filigree In Textile also features Lash on harp (it was originally performed by her teacher, the great Yolanda Kondonassis, who has a fine recent album of her own) and allows you to add the finishing touches as you assemble the threads in your mind. As expected, the JACK makes all of this sound as natural as breathing and it's hard to imagine a better presentation of this excellent, deeply involving music.

Wild Up - Christopher Cerrone: The Pieces That Fall to Earth In these three song cycles, Cerrone’s variety of expression is a direct reflection of his laser focus on the words, both their sound and their meaning. It’s easy to hear why he was attracted to the words of Kay Ryan for the title piece as her poems are full of sonic interest. Take Sharks’ Teeth, the fifth of the seven songs in the cycle: “Everything contains some silence,” Ryan wrote, “Noise gets its zest from the small shark’s-tooth shaped fragments of rest angled in it.” Cerrone sets this one with a rhythmic ostinato over which soprano Lindsay Kesselman whispers the words theatrically, letting you turn them over in your mind. The next song, Insult, bursts out of the quiet with rattling bells and tense, jagged strings, supporting one of Kesselman’s tour de force performances, as she manages to hit crescendos just this side of a shriek - appropriate for a song with lines like, “Insult is injury/taken personally/Saying this is not a random fracture that would have happened to any leg out there/This was a conscious unkindness.”

As stunning as the title piece is, for me some of its spike and clangor are on the borderline of the expected. Where the album truly ascends into the ether is in the second cycle, The Naomi Songs, a setting of four poems by Bill Knott sung by Theo Bleckmann in a perfect match of singer and song. Bleckmann brings everything he’s learned over his eclectic career to these sensual, mysterious songs, which blend the haunting drones of ancient troubadour tunes with modern production techniques such that Bleckmann is often duetting with himself. This works most spectacularly in the third song, which intertwines Knott’s two lines (“When our hands are alone, they open, like faces. There is no shore to their opening.”) to mesmerizing effect. In addition to the drones, additional drama comes from pizzicato strings and big piano chords. The Naomi Songs creates its own space wherever you happen to be, whether on a city street, at your sink washing dishes, or in a forest glade. Let it in and let it happen.

The final work, The Branch Will Not Break, is nearly as wonderful. For this setting of seven poems by the great James Wright, Cerrone uses a small chorus of eight voices (here including Eliza Bagg, who was so fantastic in Alex Weisser’s And All The Days Were Purple) and keeps the harmonic range tight, like early polyphony. This further elevates Wright’s already heightened view of the quotidian, giving marvelous lines like, “In a field of sunlight between two pines/The droppings of last year’s horses/Blaze up into golden stones” a hymnal quality.

Throughout the album, the musicians of Wild Up, under the direction of Christopher Rountree, meet the varied challenges of Cerrone’s scoring with sensitivity and spirit. Note should also be taken of the warm and involving sound of the record, for which credit is due to Nick Tipp. That his production, engineering, mixing, and mastering is so seamless is even more remarkable when you realize the vocalists and musicians were recorded separately. Great work on all counts and another brick in the edifice of achievement Cerrone has been building for the last several years.

Anne Leilehua Lanzilotti - in manus tuas I wonder if they still make viola jokes. If yes, this gorgeous album by Lanzilotti, which engages head and heart in equal measure, should put an end to that branch of humor. Not only does she exhibit a technique that is both furiously virtuosic and fabulously free, but her conception of the album - her debut as a solo performer - is an exemplar of how to create a complete work of art. She achieves this by starting from a neat organizing principle, which is that all the works “are transcriptions or involve the act of transcribing,” as she puts it in her beautifully written liner notes, concluding the thought with this lovely passage: "Transcription enables us to learn from others as well as precess our own thoughts. In doing so, we deepen our understanding of each other. Transcription - empathy - as creative process."

The boldest example of this may be the last piece, Anna Thorvaldsdottir’s Transitions (2014), which was originally written for cello and given a definitive performance by its commissioner, Michael Nicolas, on his landmark album of the same name. Before hearing Lanzilotti's version, I wasn’t even sure I wanted to hear any other cellist play it, much less a violist! But she makes it work wonderfully well, illuminating the structure of the work with her musically intelligent transcription and deeply committed playing. Also originally for cello is Caroline Shaw’s in manus tuas (2009), which was inspired by the experience of hearing the Thomas Tallis’s motet in a Connecticut church. But there’s no background necessary to immerse yourself in this meditative snapshot’s yearning lines and disordered pizzicato.

Lanzilotti’s own composition, gray (2017), is next, its startling alarm bell percussion (played by Sarah Mullins) shocking you out of your reverie. Based on a work for dance, this music-only version lacks nothing as the haunting viola lines interact like dark ribbons with the percussive sounds, the latter growing increasingly abstract as the bottom of a snare drum is employed alongside Hawaiian bamboo rattles called pū’ili. External sounds, like the rattling keys of a fellow commuter, fit right in, exposing the Cagean nature of the piece.

Two works by Andrew Norman fill out the album, with the first, Sonnets (2011) giving Lanzilotti the opportunity to play with masterful pianist Karl Larson and indulge in occasional long lines that are almost romantic. The five short movements draw on fragments of Shakespeare sonnets, seeking to transcribe specific words (or feelings, at least) into sound. The second song, to be so tickled, takes its cue from Sonnet No. 128 and is especially delightful. Sabina (2008-09), the second Norman piece, also originates from a germ of extra-musical information, in this case the way light shines through the translucent stone windows of the Basilica Of Santa Sabina, and spins it into a fascinating web of sound. Even without knowing the visual inspiration, I think Sabina would still create shapes and shades in my mind. It must be treat to see Lanzilotti play it live. Hopefully she will include it - or any of the pieces from this remarkable album - the next time she graces NYC with a performance.

Tracks from all of these albums, and so many more, can be found in my playlist, AnEarful: Of Note In 2019 (Classical). Click the little heart to keep up with comes out during the rest of the year - and please let me know what I've been missing.

Posted by Jeremy Shatan at 8:43 AM