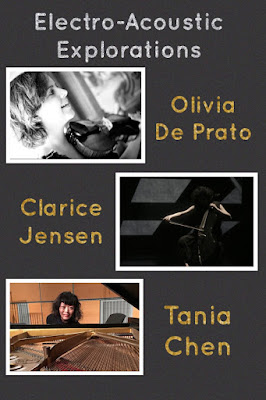 Here are three tantalizing albums that include compositions combining acoustic instruments with electronics, two of which are also solo debuts by a couple of the finest musicians on the new music scene.

Streya - Olivia De Prato I’ve seen Olivia De Prato perform with Missy Mazzoli and she’s the kind of player that stands out in a crowd, dazzling with her utter command of even the most demanding techniques and the sheer expressive verve she puts into the music. Her work with the adventurous Mivos Quartet, which she founded, has also been exemplary. So, I was delighted when word of this solo debut came over the transom and even happier when I saw it was mostly world-premiere recordings of works written in the last decade.

The opening piece, Ageha.Tokyo, written by Samson Young, could hardly be more spectacular if fireworks shot out of my earbuds while it played. Starting with some tactile, serrated sounds, De Prato enters with defiant notes which gain momentum and then start to soar as the electronics begin rounding out and growing more melodic. The verse of My Favorite Things threatens to burst out but Young keeps it at bay and things are soon back on the aggressive side. Young named the work after one of the largest gay nightclubs in Tokyo and it doesn’t take much of a leap to imagine a beat-driven remix lighting up their dance floor. Young, based in Hong Kong, has a number of intriguing irons in the fire of electronic music and performance art and I’m grateful for this introduction to his world.

Streya by Victor Lowrie, who plays viola in the Mivos, finds us in more familiar terrain, with De Prato in an angular duet with herself. Circular phrases spin into the ether, replaced by harmonic whistles or sharp strums, as the piece moves toward the anguished romanticism of early Schoenberg. Percorso Insolito is described by Ned Rothenberg as “an adventure in rhythm, space and color,” and it also has a nice meandering, interior quality, like a train of thought that never quite resolves. I know Rothenberg’s work mainly via his earthy sax playing so this was a valuable glimpse of his other interests.

Taylor Brook’s Wane takes a smart idea - five multi-tracked violins, each in a slightly different tuning - and uses it to spin a kaleidoscopic tale in sound that has as many twists and turns as a good mystery. Rather than a bang-up finish where all is revealed, Brook prefers to leave questions unanswered with a woozy ending that shuffles uncertainly into silence. For more Brook check out the last Mivos album or the TAK Ensemble's Ecstatic Music, which focuses solely on his work. Tanz. Tanz by Reiko Füting is also based on an intellectual construct, in this case a study of the Chaconne from Bach’s D Minor Partita, but maybe only a musicologist would know that from listening. I hear a tightly constricted approach, both in the palette of notes and in the length of the lines, that intrigues due to all it leaves out. The premiere recording of Tanz. Tanz was by Miranda Cuckson on an album of Füting's work released in 2015 called namesErased, which I'm looking forward to investigating.

Missy Mazzoli’s Vespers For Violin closes the album and will undoubtedly leave you wanting more. A distant cousin of her stunning Vespers For A New Dark Age, it has Mazzoli’s characteristically assured electronic textures combined with an incantatory violin part that De Prato brings to life with, as everything here, her wondrous playing and total commitment to the visions of her collaborators. Streya is not only a fantastic debut for De Prato but also an object lesson in how to put together a solo violin record in 2018, from the selection of pieces, to the recording, and even to the artwork - kudos!

For This From That Will Be Filled - Clarice Jensen Like De Prato, cellist Clarice Jensen is known for her role in a group, in her case the American Contemporary Music Ensemble, of which she is also Artistic Director. Somehow in the midst of all the ACME activity, Jensen has managed to assemble this meditative collection, which was originally conceived as an audio-visual performance with artist Jonathan Turner. The album features three works for cello enhanced by effects pedals, other electronics and production, and Turner-produced videos are on the way to add back the visual elements.

The first piece, bc, was a collaboration with Icelandic composer Jóhann Jóhannsson, one of the finest film composers of our time who died suddenly last month at the age of 48. Slow, mysterious, almost in the realm of ambient music, bc is a deeply immersive piece that now provides a fitting receptacle for thinking about Jóhannsson's life and work, so unceremoniously cut short. Michael Harrison, whose last works for cello were written for Maya Beiser, contributes Cello Constellations here, a creation for solo cello, 14 pre-recorded cellos and sine tones. There's a lot of math, science and technology behind the 15-minute composition, but as a listening experience it is captivating, with the background of cellos a lush bed for the sparkling sine tones, which light up the mind like the artificial stars in a planetarium show. While there is no reason to make "use" of this music, it is hard to imagine close listening not leading to a sense of calm, at least until the last three minutes, when Harrison allows tension to mount before a slow fade.

The album ends with the title track, composed by Jensen and taking place over two parts. The first is short and darkly elegant, with multiple droning lines and swirling ostinato phrases. It has a structural thread, almost a narrative thrust that pulls you though. The second part is much longer, over 18 minutes, and has a glacial drama to it, with deep organ-like tones and a gradual sense of opening up. By the last third we are adjacent to Romantic and even Baroque territory, with burnished melodies for solo cello. A tape loop of what may be found sound appears in the background, once again lending a sense of story to the sounds. It seems to end in mid-sentence, only adding to the intrigue. But there is nothing unfinished about Jensen's album, which will be released on April 6th. For This From That Will Be Filled is a clear statement of purpose of what the cello can do in several enhanced environments, with a conception that is never less than fascinating and playing and recording that are always sublime.

John Cage: Electronic Music For Piano - Tania Chen It's hard to imagine a more Cage-ian approach to this monumental half-century-old work. In typical fashion, Cage's "score" leaves a lot up to the performers but it's still rare for musicians to really take the ball and run with it as Chen and her collaborators have done here. Chen, a pianist and improviser, has made Cage a specialty of hers and has assembled the ideal group of collaborators in guitarist Thurston Moore (of Sonic Youth), multi-instrumentalist and author David Toop (known for being in the Flying Lizards and working with Brian Eno, etc.), and electronic musician Jon Leidecker (Negativeland, among other things). But all of these people never worked together. Instead, Chen recorded three versions of the piece as duos with each of them and then, working with producer Gino Robair, "played the duos simultaneously and, using a chance-based system, selected which sound sources were heard over time." Or not heard: this being Cage, leaving silences - sometimes as long as three minutes - is also part of the landscape.

And how does this all add up for the listener in the final result, which is over an hour long? Like a funhouse, but somehow serious, with tones and textures leaping up out of nowhere, sometimes just raw piano, more often heavily treated or combined instruments, guitar feedback or oscilloscope-derived notes. The stop-start-stop arrangement means that it's never an entirely comfortable experience, even after several listens, but who says art should make you comfortable? Occasionally, there will be a section (from 53:15 - 53:47, for example) that is so satisfying on its own that you will wish it went on for longer. Anyone for a remix album? Or should I fire up Garageband and try some cutting and pasting? I have a feeling that Cage, not to mention Chen and her posse, would actually enjoy the idea of this groundbreaking recording becoming further fodder for yet another creative process. Thanks to Chen, we have one more reminder of what a fertile field Cage's mind was and how its fruits can continue instructing us on what music is and how it can be made. For this, if nothing else, we owe Chen a large debt of gratitude.

For more electro-acoustic experiences, check out this nifty playlist put together by New Sounds.

Posted by Jeremy Shatan at 2:01 PM