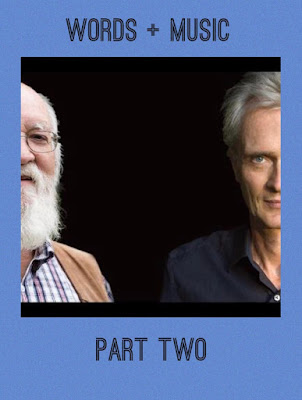 In Part 1 of this mini-series, I looked at Landfall by Laurie Anderson and Kronos Quartet, which sprinkled her wry and poetic storytelling amongst gorgeously dark strings and electronics. Here we have something quite different from a former collaborator with Anderson that also puts words and music together in intriguing ways.

Mind Out Of Matter - Scott Johnson and Alarm Will Sound Scott Johnson dropped two bombshell albums in the 80’s that have been in my musical DNA ever since. The first was John Somebody (1986), which I read about in the New York Times and bought without hearing a note. More than three decades later its introduction of Johnson’s brilliant method of turning speech into music has not lost its capacity to startle and delight. What he does is meticulously notate the intrinsic melodies in natural speech, and then use those melodic fragments as the seeds of wild fantasias incorporating the instrumentation and techniques of both rock and classical music, with a focus on his proggy and dense guitar chords and arpeggios.

That description doesn’t do justice how John Somebody turns a banal party conversation (“You know who’s in New York? You remember that guy - the - he was sort of a, sort of a...) into sheer wonder, a feat repeated on the other pieces on the album, including one which uses laughter as its inspiration. Perhaps even more surprising was that Johnson was able to adapt his methods to create the soundtrack for Patty Hearst (1988), Paul Schrader’s spooky evocation of the newspaper heiress’s forced adventure with the Symbionese Liberation Army. The theme took the late Natasha Richardson’s voice from the film, as she (as Hearst) calls for her parents from the closet in which the SLA has confined her: “Mom? Dad?” It’s as haunting and indelible as those “la la la’s” from Rosemary’s Baby.

Both records were in high rotation and I was even lucky enough to see Johnson perform John Somebody at Lincoln Center, which included probably the most six-string shredding that august institution had ever experienced to that point. After Patty Hearst, however, I lost touch with Johnson’s work, partly due to things happening in my own life and to the sporadic nature of his output. That’s why I missed a step in the evolution of his approach, namely the idea that he could use his speech-to-music method to deliver content as well as melodic inventions. If this description sounds slightly dry, that’s a reflection the one early example I found, How It Happens, which is a multi-movement work for string quartet and the voice of I.F. Stone, the legendary journalist. Even with Kronos Quartet sawing away dutifully and Stone spouting some interesting notions, it’s a lackluster affair. Maybe that’s why Kronos chose to sprinkle it among a few albums rather than devoting a whole release to it. Americans, from 2010, is far more successful, a dense and angry treatise on stereotyping and prejudice. I highly recommend one of our major ensembles revive this important work, so relevant to our times.

Mind Out Of Matter, based on a lecture by Tufts professor Daniel C. Dennett, is however a further evolutionary step, a leap even, in Johnson's craft. First there’s the music, performed with both precision and sparkle by the virtuosi of Alarm Will Sound, one of the finest new music ensembles around. While Johnson in his liner notes repeats his mission statement of combining both the instruments and traditions of rock and classical music, I hear an alternate lineage to the sound world of MOOM, namely that of composed jazz. This was the short-lived movement that grew out of the sessions by Miles Davis and Gil Evans that became The Birth Of The Cool. The main protagonists were people like Jimmy Giuffre, Shorty Rogers, and even my old favorite Kenyon Hopkins. They took the sound and instrumentation of jazz and used it to create through-composed pieces devoid of significant improvisation. Check out Giuffre’s The Train And The River or Hopkins’s ballet score Rooms for some notable examples.

So, while there is some of Johnson’s trademark guitar (played here by Caleb Burhans), alternately snarling, twanging or suspending chords like Pete Townshend, the woodwinds and brass dominate the overall texture. There’s also marimba and piano, percussion and a drum kit, and the rhythms are firmly in a jazz mode, never getting into a 4/4 rock groove, although there are touches of Latin-tinged funk. Take the first movement, Cow Design, which kicks off with a brass fanfare that quickly grows knotty, bolstered by the woodwinds and guitar and pushed along by the drums. It’s immediately involving and then there’s a hard stop to allow Dennett to enter with his first line: “Who designed this cow?”

Chuckle if you like, but what follows is no joke as the professor goes on to compare how modern cows evolved from aurochs to the way “Religions started out wild and then were domesticated.” This being Johnson, however, there are strategically repeated lines, melodic development based on those repetitions, counterpoint reacting to those melodies, variations building on those melodies, and almost imperceptible segues to the next nugget of musical and spoken information. When you consider that Dennett, intellectually dynamic as he is, is not an especially melodious speaker, MOOM becomes more and more like a high wire act, and a spectacularly successful one at that.

You may be excused for wondering if this content-heavy piece bears repeated listening, or if you extract everything of value from it at once, like a tea bag, and subsequent hearings just grow more diluted. MOOM is fundamentally a musical work and I think you would be doing both it and yourself a disservice if you approached from that point of view. I have found it nearly endlessly enjoyable to just let it go by, absorbing soundbites here and there, letting Dennett’s ideas take shape in my mind as if by osmosis.

And what ideas! This is one of our great minds, synthesizing biology, anthropology, evolution and technology into a wonderfully original theory about the roots of religion, comparing it to everything from memes, to the common cold, and to parasites which hijack ants to colonize large mammals. For example, in the movement Good For Itself he says: “Every human group has religion, so it must be good for something. Every human group that’s ever been studied also has the common cold. What’s that good for? It’s good for itself. The common cold evolved because it can evolve. It’s not good for anything else, it just evolved because it can evolve. And ideas can evolve because they can evolve, too. They don’t have to be good for anything. The fact that they are universal only shows that they do a very good job of living in that particular ecological niche.” Heady stuff, indeed, and rich food for thought.

You’re probably figuring out by now that Dennett’s view, while clear-eyed and respectful, is ultimately atheistic. This aligns with Johnson’s views (and mine), which he has promulgated in various essays over the years. Suffice to say that if you are not secure enough in your own beliefs to have them challenged, you might find yourself offended by some of what Dennett says. But more likely you will learn something no matter what your level of orthodoxy - and you may even find yourself feeling a bit of anthropocentric pride in the uniquely human development of belief systems.

The final movement is called Awe, which begins with some ruminative, starlit sounds before Dennett enters: “The traditional accompaniment to awe is a sense of mystery. But we know that there is another kind of awe, which is accompanied not by mystery but dawning understanding.” And: “The idea that if you remove the mystery from the world, you remove the sources of awe, it’s just an obsolete idea. Modern understanding of the world is more awe-inspiring by orders of magnitude than the old mythological, threadbare visions of several thousand years ago.” I couldn’t agree more and my awe is now directed at Alarm Will Sound, conducted by Alan Pierson, for their perfect performance of a difficult work, and at Johnson for his alchemical work of creation, which probably shouldn't work as well as it does. There are some mysteries and miracles left in the world after all.