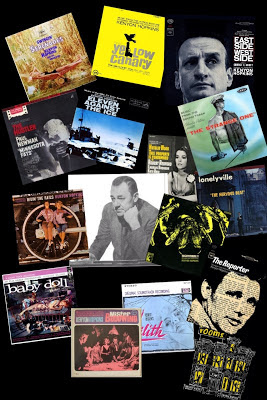 Why does some music just FIT? When I first heard the music of Kenyon Hopkins on Spinning On Air (WNYC), it was so perfect that I thought host David Garland was making it up. In his day, Hopkins was a go-to soundtrack composer, fitting sound to sight with a keen eye to the visual and psychological elements in the movies he worked on. In his heyday, he was nearly as acclaimed and well-known as legends like Henry Mancini and Ennio Morricone and his dark, jazzy and carefully composed sounds were used in hit films like Baby Doll and The Hustler, as well as many that are forgotten today such as The Yellow Canary and Mr. Buddwing. He did fantastic work on the one remarkable season of East Side West Side, which starred George C. Scott as a crusading social worker and also featured Cicely Tyson in her first major role.

He also released a string of "sound tours," instrumental albums and collections of storytelling sound effects (Panic, Shock and Nightmare), often in partnership with Creed Taylor. He ended his career as music director for CBS Television - you can catch his name in the end-credits of The Odd Couple - but was nearly forgotten after his death. Most of his records are still out of print. His music lives on in my life, however, and has been an integral part of me since I heard those first notes almost 25 years ago.

Take a few moments on his 101st birthday to immerse yourself in the sound world of a lost American master.