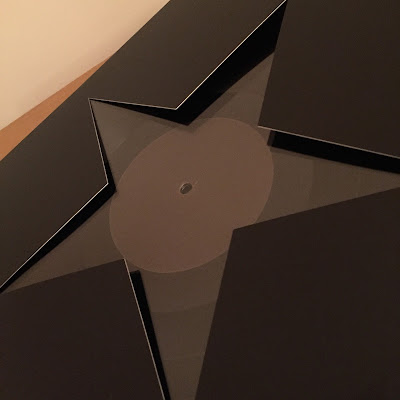 One of my Off Your Radar colleagues recently asked me if I thought this year was as good as 2015 for music. I thought back on my last few weeks of trying to narrow this list down to 20 standout albums and answered "Absolutely!" But I have a secret weapon: classical and contemporary composed music, which occupies six slots on my list so far.

Also, 2016 ain't over yet and the second half promises some releases that could blow the year wide open. Beck's dance-pop follow up to Morning Phase should have us saying "Wow" over and over, Scott Walker is dropping a soundtrack in August, and Hiss Golden Messenger has something special coming in October. Also, Pusha T is supposed to come out with the album prefaced by Darkest Before Dawn, which was pretty fire itself, and there are rumors Spoon is in the studio with Dave Fridmann producing again. But that's just tomorrow calling. Ado to the side - let's do this.

1. David Bowie - Blackstar I will have more to say about this extraordinary album at a later date (promise) but having lived with it for this long I can safely say this rose's bloom is eternal. Bowie is fully engaged artistically, pushing his voice and songwriting into new areas, and all-in emotionally. If not for the demon cancer, I think the future would have held yet more greatness from the Starman. We'll not see his like again - that is tragically certain.

2. Radiohead - A Moon Shaped Pool The dons of Oxford let the light in.

4. Benji Hughes - Songs In The Key Of Animals Life raft of the year award goes to... Unfortunately, based on the so-so live show I saw, it may be Benji himself who is most in need of rescue.

5. Mutual Benefit - Skip A Sinking Stone This gorgeous album is the most fully realized collection yet from Jordan Lee since 2013's Love's Crushing Diamond, which catapulted him from Bandcamp culture to indie notoriety. With rich instrumentation and vocal-free passages, there's a sense of narrative to the seamless sequence of songs. When Lee announced "We're going to play the second side of the album," at Mercury Lounge last month, it made perfect sense. Lee was also savvy enough to include Not For Nothing, a gently swinging song with a classic feel that exists perfectly either in or out of the album. Slow March is also a standout and should be the next single. I'm also happy to report that the live show has grown even more closely aligned with Lee's goals since I last saw him in 2014. Granted that was at an outdoor show but I remember being surprised at how extroverted the music became on stage. This time the mood was perfectly suspended and sweetly leavened by Lee's charming repartee. So see Mutual Benefit if you have a chance - but get the record now. Lee's quietly embroidered take on Americana should be more broadly heard.

7. Chance The Rapper - Coloring Book Meeting and maybe even exceeding the expectations of 2013's great Acid Rap mixtape, Chance paints on a broad canvas on this beautiful album. Summer Friends is an instant classic with an assist from Bon Iver soundalikes Francis and the Lights, and No Problem even has Lil Wayne and 2 Chainz sounding like they care. Yes, Justin Beiber is on here but don't let that stop you from hearing the hip hop album of the year so far. And if you're still waiting for Chance to make his major label debut, the chorus of No Problem should make his position quite clear: "If one more label try to stop me/ It's gon' be some dreadhead niggas in ya lobby." I wouldn't get in his way.

8. Cian Nugent - Night Fiction I admit it took me a minute to get used to guitar wizard Nugent's voice, which is a bit quirky and cracked. But the songs kept haunting me and I grew to love everything about this record. Daniel Fox of Girl Band is partially responsible for the production and the sound is glorious, warm and open. Nugent, a master of the slow build, lets the songs take their time, making it easy for a listener to lose themselves within their wending paths. I hope to have an opportunity to hear him stretch out on these songs live when when he plays Baby's All Right on August 7th.

9. Car Seat Headrest - Teens Of Denial After Will Toledo garnered a lot of attention for last year's Teens Of Style, which compiled home (or, more accurately, driveway) recordings made over several years, he entered a proper studio and cut this masterpiece. Storming, multilayered guitars drive each song, with assists from occasional horns and keyboards. Burning with passion, Toledo spins tales of high school and young adulthood as if he was the first to experience those stages of life. Which he was, in a sense, as no one can delineate our own lives until we go through them. The best part is that whether those days are distantly ahead or behind you there are plenty of opportunities to find yourself in the songs of Will Toledo and Car Seat Headrest. Sky's the limit for this one.

10. Field Music - Commontime The Brewis Brothers outdid themselves on this one, their best album since Measure in 2010. Gleeful horn arrangements, strings both lush and austere, clever lyrics, and their funkiest rhythms all come together to make this collection a sheer delight. Even his late purple majesty, Prince, found his toes-a-tapping and tweeted his approval. He's got some DNA in this album as do Steely Dan, The Meters, and XTC. But Field Music have been hoeing that distinctive row for years and us longtime fans are gratified to see them getting more attention. The noisy days are over? Not if you play this - and the rest of this album - at the appropriate volume.

Ten more great records and a playlist are featured in Part 2!
Posted by Jeremy Shatan at 7:19 PM