Assembling a collection of pieces from wildly disparate times and/or places can be a delicate operation. David Greilsammer triumphed in this area with last year's Scarlatti/Cage album, now firmly installed in my mind as one of the great piano records. So far this year we have two other recordings that successfully converse across the centuries - one is reviewed below and I'll get to the other next week. 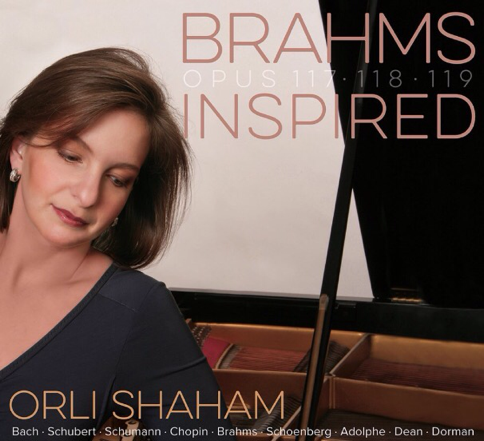 Orli Shaham - Brahms Inspired I'll admit to being an inconstant Brahmsian. While I am devoted to his Clarinet Quintet and find Ein deutsches Requiem fascinating, not a lot of his other music has compelled me. I may even be guilty of selling back a CD of his songs, but digital music was expensive back then and I needed to husband my resources. Even now, if you don't move me you are gone.

When I heard about Orli Shaham project, I was intrigued, however. She had obviously been on a very personal journey with old Johannes, even going so far as to commission works to aid her pan-optical view of his music. Also, the three Brahms pieces included were all late works and I thought I might find some of that spare and utter mastery found in the Clarinet Quintet with which to connect.

The first piece on the album, a collection of six pieces simply called Klavierstücke, Op. 118, instantly pulls you into the world of romanticism, melodies and lush chords swelling and crashing like breakers on the beach. Listening to Shaham's assured and stylish performance I realized that, despite the efforts of the Second Viennese School and Stravinsky, the 20th Century was essentially romantic, at least until the Minimalists struck a chord (or an arpeggio, ad infinitum). This is the equivalent of realizing that all your favorite television character actors had already had full careers in vaudeville. In other words, the past is ever present and Brahms more than holds his own even now, in yet another century.

After Op. 118, we get Bruce Adolphe's My Inner Brahms (an intermezzo), a short homage commissioned for the album. Adolphe is a New York based composer and educator known by millions of public radio listeners for his Piano Puzzler segments on Performance Today. A distillation of his improvisations on themes by Brahms, it's a lovely little bit of time travel. The three pieces that follow are all works that inspired Brahms - Schubert's Impromptu, Op. 90, No. 3, Schumann's Romanze, Op 28, No. 2, and Chopin's Berceuse, Op. 57. They all go down easily and give you an idea of what might have been swirling in Brahms's head as he composed. They also prove that I will always be a Schumann person - the clarity of his textures and conception is immediately evident and very attractive.

Brahms's Drei Intermezzi, Op 117, follows and, if anything, it's Schumann's influence I feel the most. This leads me to start wondering how much Shaham's performances themselves might be influence by all the crosstalk between composers. Whatever the reason, the three intermezzos are simply, but never simplistically gorgeous. Shaham seems to find little stories between the notes, and to delight in their telling.

Disc 2 starts with another commissioned piece, After Brahms - 3 Intermezzos for Piano, by Avner Dorman. Dorman is Israeli-a born and one of the most successful young composers in that country. He and Shaham have crossed paths before, with Nigunim, a violin sonata based on Jewish themes commissioned and performed by her and her brother, the great Gil Shaham. The first of his intermezzos really puts the "passion" in the Allegro con motto apassionato, with furious downpours of notes coming to a crashing halt on the left side of the keyboard. It's short enough that it's actually great fun and Shaham blows past the difficulties with aplomb. the other two pieces in the set profitably explore other variations on the "whisper to a scream" template.

After Dorman's romantic apotheosis, Bach's Partita No. 1 comes as somewhat of a relief, especially in Shaham's lighter than air performance. It feels like her fingers are just barely touching the keys. Even so, I admit to feeling a slight bit of ear fatigue at this point - but there is nothing saying you need to listen to all 120 minutes of piano music at once. However you get there, don't miss the Schoenberg miniatures that come on Bach's coattails. Schoenberg, one of my favorite composers, was a crucial bridge from the perfumed drawing rooms of the Romantic era to the spiky bustle of Modernism. He had cred in the new world partially because his early works were so accomplished. If he had composed nothing after Verklarte Nacht, Gurrelieder and Ewartung, he would be known as a major late-Romantic composer.

Obviously, Sechs Kleine Klavierstücke, Op. 19, is not one of Schoenberg's big deals. But mashing up six tiny pieces into a work less than six minutes long without it ever feeling frugal is no mean feat. Shaham seems to use a magnifying glass to find the individual character of each little section, like painting a Kandinsky on the head of a pin. Put down your phone, slow down, and observe the process with your full attention - trust me, you will be rewarded.

The final piece is a true mash up, with Brahms's Klavierstücke, Op 119 interleaved with Brett Dean's Hommage à Brahms für Klavier. While Dean's work was originally commissioned by Emmanuel Ax, like the other new music here, this is a World Premiere recording. Dean's work is probably the most radical of the new pieces, finding the connection between modern cacophony and the 19th Centuries cascades of notes. There's also a touch of knotty jazz to his writing, bringing us right up to date. But Brahms, and ultimately Orli Shaham, have the last word. The third Klavierstücke, Rhapsodie in e-flat major, is so tuneful and open-hearted that you may be inspired (sorry) to go back to beginning of this wonderful collection. Thanks to Shaham, I think I'll be a better friend to Brahms from now on.  Brahms Inspired is out on June 9th.