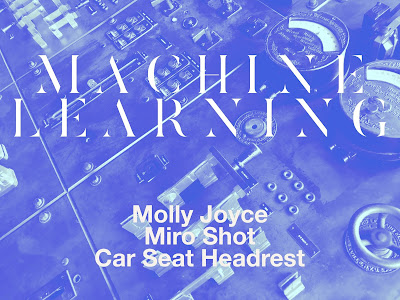 Here are three albums that combine the organic with the synthetic in such an integrated way that such a divide becomes irrelevant. The end result is music that is deeply human.

Molly Joyce - Breaking and Entering There is a lot to explore in the background to Joyce's debut album, mostly around her use of electric toy organs, which allow her left hand, disabled in a childhood car accident, to participate fully by pressing the chord buttons. And it is remarkable and inspiring stuff about turning your weaknesses into strengths and providing uplift to those who doubt their own ability to move beyond obstacles imposed from within and without. Joyce covers some of this ground in her interview with Frank J. Oteri earlier this year and in her TEDxMidAtlantic talk from 2017, which is when she first came to my attention with Lean Back and Release, an EP of two brief works for violin and electronics.

But none of that prepared me for what this brilliant album would sound like, or how it would make me feel. Unlike that earlier release, which featured her as a composer, Breaking and Entering is a startling introduction to Joyce as a performing artist, with her clear, unwavering soprano soaring over the sparkling, propulsive patterns of organs and a halo of electronics. The emotional impact has me reaching for comparisons as varied as the ancient incantations of Hildegard von Bingen, the proto-New Age of Popol Vuh, and on to the gleaming optimism of futurists like Franco Falsini, who recorded under the name Sensation's Fix in the 1970's.

A song like Form and Flee manages to be simultaneously meditative, hypnotic, and energizing, putting wind in your hair as you pirouette through the ether in imagined flight. The lyrics, as in this example from Body and Being, wisely straddle the personal and universal: "are you the soul of me/or the disgrace of me/are you the whole of me/or the reject from me." After all, each of us have our battles over the divide between our physical selves and the world of our mind and perceptions.

While Lean Back and Release was firmly in the realm of what is usually called "contemporary classical," Breaking and Entering overleaps silos and should make inroads deep into the hearts and minds of fans of dream pop, chill wave, ambient techno, synth pop, Krautrock, Euro-disco, or genre-defying artists like Micheal Hammond of No Lands, who produced and engineered the album. I can't say enough about how great this is and will leave you with one caveat: prepare to be obsessed. Note: Deepen the experience by joining the virtual album release party on June 26th.

Miro Shot - Content Arising from the ashes of my beloved Breton, this collective led by singer/songwriter/arranger/futurist Roman Rappak began releasing singles last year, assembled on the Servers EP, while also pushing forward a vision of applying VR and AR to the concert experience. Now comes their debut album, which expands on those earlier songs, combining electronics, orchestrations, a tough rhythm section, and Rappak's trademark vocals, alternately wry and bruised. While the lyrics question much of what Hoovers up the collective attention of the world at this moment, they are unafraid to aim straight for the gut with big choruses and bridges that kickstart songs into overdrive.

The visuals are just as addictive, all quick cuts, high-tech overlays, and clever juxtapositions. In future decades they will become essential chronicles of the way we live now, while still remaining ever-fresh through sheer force of artistic will. The same can be said of the album, which is resolutely up to the minute and deeply informed by the past, seeming to exist in its own time-space continuum. While the current crisis means we'll have to wait even longer for the concert experience, you can grab a taste in their live sessions for Radio X and sign up for a date on their Virtual Worlds tour - or all four. While new restrictions on our lives seem to be imposed daily, some limits are a thing of the past. And Miro Shot has the perfect content with which to celebrate that new kind of freedom.

Car Seat Headrest - Making A Door Less Open While Bowie going electronic didn't have the seismic impact of Dylan going electric, the aftershocks have been longer lasting. Example "A" for 2020 is this new album from Will Toledo's indie rock band, which only features guitar on four out of 10 tracks. One of those songs is the anti-anthem, Hollywood ("Hollywood makes me want to puke," etc.), which comes in on a guitar storm then settles into a chillier groove - but you know the storm will return. I can only imagine how captivating it will be in concert.

But many of these songs display Toledo's rock-solid song craft and could likely exist in any number of settings. Even so, it's a thrill to hear him push his vocal limits on a song like Hymn and fuck with the rhythms on Martin, shifting a classic CSH love song into stranger realms. When the synth/trumpet solo enters it feels even more blissful due to the contrast in moods and textures, further proof of the mastery of soundscaping on MADLO. Andrew Katz, drummer for CSH since 2014, has also been pursuing a "satirical EDM" project, 1Trait Danger, for a while and certainly deserves some credit for moving Toledo into new territory. When Bowie put out Low in 1977, he got some stick from the rock establishment and, likely, lost some fans. I hope that isn't the case with this one. But I think Toledo, like Bowie, is engaged in a continual quest to make the music that satisfies himself, a quest on which it is a privilege to tag along.

You may also enjoy:
AnEarful's First Decade: 100 Best Albums Of The 2010's
Best Of 2017: Classical
Levitating With Car Seat Headrest

Posted by Jeremy Shatan at 2:09 PM