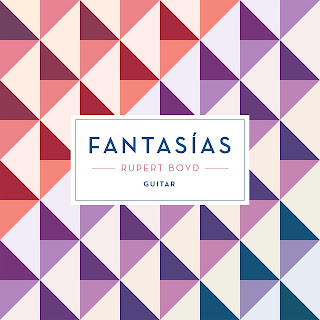 Rupert Boyd is an Australian guitarist of surpassing skill and intelligence with an eclectic ear, all qualities in evidence on his globe-trotting (and time-traveling) sophomore album, Fantasias. By the end of the collection, we have touched down in Argentina, Spain, Cuba, Italy, Hawaii, France, Switzerland, and the British Isles, and moved through 400 years of music.

When you read "Argentina" your mind probably conjured up Astor Piazzolla, which would be spot on, as it is the neo-tango genius's Otono Porteno, in an arrangement by S. Assad, that opens the record. Like the master himself, Boyd avoids any over-dramatic clichés to deliver a performance that handily deals with the virtuoso requirements of the piece. This sets the tone for what follows, a lively sequence of the tuneful, folky, and exploratory. Boyd's project is enabled by the lighter-than-air, crystal clear sound of the record, which was made in a "centuries old church just outside of London" with John Taylor, a British producer of some renown, especially for his work with guitar and lute players.

Perhaps it's Taylor's influence, but the Celtic and English folk songs are marvelous here, especially John Dowland's Fantasie, which traverses a few moods in its four minutes. Naturally, Boyd is simpatico with his fellow countryman, Philip Houghton, with whom I was completely unfamiliar. He manages to lay on a bit of mystery, especially in his God Of The Northern Forest - don't be surprised it this one shows up on Game Of Thrones or in the next Peter Jackson fantasy.

I'm especially grateful to Boyd for including two Manuel de Falla pieces, including his own arrangement of Pantomima. Other guitarists should add this to their repertoire and continue bringing attention to this oft-overlooked composer. Leo Brouwer, a Cuban musician who explored everything from Afro-Cuban forms to Bach, The Beatles, and beyond, is also not overexposed. A guitarist himself, his Tres Apuntes takes almost maximum advantage of the possibilities of the nylon-stringed instrument. Speaking of which, my fantasy is that Boyd takes on Luciano Berio's Sequenza XI on his next record - I think it would fit like a glove.

Brouwer's trilogy is one of the meatier pieces on the album, but as expected from the title, Fantasias does not aim to make demands, but to rather provide a bit of smart escapism. We also escape the expected - turns out Boyd covered Granados on his first album so you won't find that guitar-record staple here! I like Boyd's light touch, both on his guitar and in his conception of the album. It's been a great accompaniment to mornings at work and I can imagine it finding a place in your life as well.

If you're in NYC and you want to see Boyd in person, act fast as his album release event is June 16th at the Greenwich House School of Music. All the information is here, including dates in December with cellist Laura Metcalf - they perform together as Boyd Meets Girl and who can resist that?