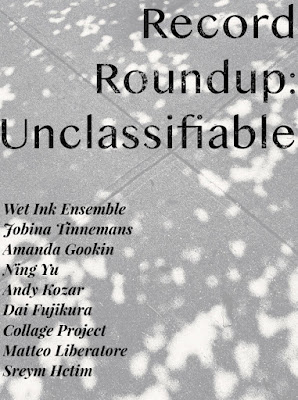 "The classical period is certainly, visually, one that is very structured, with gilded moldings and perfection naturally associated with that - and we need to totally get rid of that. So even as fundamental as the language,  not calling it "classical music" and then "other music" or "classical" and then "world music," which is the most ridiculous distinction you could possibly have. Just very much with language, what are we including as being representative of the community...it's "common music" or "music of the people" that we present, as opposed to classical music as a thing. So trying to think at the root what we are trying to classify as a representative art form of the people, which is how classical music started, by being popular music of the people, right?" - Ashleigh Gordon, co-founder, Artistic and Executive Director, and violist of Castle of our Skins on Getting Curious with Jonathan Van Ness.

Just leaving that there, knowing that Gordon is speaking mostly about the work Castle of our Skins is doing to make visible the work of Black creators, who are only minimally represented below. I'll also say that I use genre terms to help readers find their way to the music they want to hear most quickly, recognizing that not everyone wants to listen to everything. If there's a better term than "classical" I am so ready to put it to work. That said, many of the records below mix and match genres and techniques so freely as to be essentially unclassifiable. Take the leap and listen even if you don't know exactly what to expect, beyond the few impressions I can convey in a few brief words.

Wet Ink Ensemble - Glossolalia The latest grand statement from this band of experts gives an opportunity to focus on the compositional talents of two members, Alex Mincek and Sam Pluta, both of whom put their colleagues through some extraordinary paces. Whether it's the power and precision of percussionist Ian Antonio in the Isonomy movement of Mincek's title work and the On/Off section of Pluta's Lines On Black, or Kate Soper's searing vocals in Pluta's Lines On Black, everyone burns bright. There's also a great deal of wit here, as in Duo, which opens the Pluta piece, with the interplay between Erin Lesser's flute and Josh Modney's violin even recalling some of Ennio Morricone's wilder moments, all puffs and pops, swoops and glides. Cycle, the fifth part of Lines On Black, could even be the soundtrack to a particularly abstract - and very kinetic - video game. Any one section of either of these major works of ultra-modern chamber music could serve as a calling card for the ensemble, the players, and the composers. Taken as a whole, the 65-minute album is a nearly overwhelming infusion of pure creativity.

Jobina Tinnemans - Five Thoughts On Everything Wildly inventive stuff from a Dutch-born composer who seems to resonate with some of the directions coming out of Iceland over the last decade or two. In fact, the second piece, Djúpalónsdóttir & Hellnarsson, features recordings of the South Iceland Chamber Choir in those two locations (along with some seagulls), with Tinnemans then bending their singing to her will for a dislocating experience of another kind of glossolalia. The Shape Of Things Aquatic alternates field recordings of a Welsh coastline and and Icelandic waterfall for a sort of mental vacation. Most fun of all is Varèsotto, Hinterland of Varèse, commissioned to celebrate the 50th anniversary of Edgard Varèse's Poeme Electronique. The great man himself would likely enjoy this  funhouse of synthesizers, bird calls, and manipulated vocals. Perhaps most important, however, is the firm hand Tinnemans keeps on the tiller as she pulls you through nearly uncharted territories, following tributaries from the 20th century's avant garde to their natural conclusions.

Amanda Gookin - Forward Music 1.0 Upon first listen, Nathalie Joachim's Dam mwen yo ("my ladies"), which opens this debut album, almost felt too familiar, yet another combination of cello, voice, and loops, but I stuck with it and soon became hypnotized by the textures and metronomic rhythm. Stolen, by Allison Loggins-Hull, comes next and gives you full immersion into Gookin's wondrous tone, which is then taken into twilight territory by Angelica Negron's electronics in her Las Desaparecidas. Both works take inspiration from tales of human trafficking, lending their restraint even more elemental power. Gookin commissioned all seven pieces here from female composers at various stages in their careers each with their own approach to themes around the power, challenges and pain of women in the world today. The final piece, Jessica Meyer's Swerve, brings joy and lyricism into the equation, a perfect send-off perfectly played by Gookin. Rest assured that everything here exists on a level of glorious musicality, with access to the artists' intentions not a requirement for listening. But once you know, you will be even more floored by what Gookin has achieved here. You'll also be on high alert for recordings of works commissioned for Forward Music 2.0, which premiered last year, and 3.0, set to be performed at National Sawdust on November 1.

Ning Yu - Of Being The three pieces here, by Wang Lu, Misato Mochizuki, and Emily Praetorius, were all written for Ning over the last two decades and get first recordings on this debut solo album from one of the pianists in Yarn/Wire. The compositions are full of drama and intrigue, but it's the title track, by Praetorius, that hangs in the air long after it ends. Made up of fragments and silences, it constantly threatens to coalesce into something you can grasp - but then it slips through your fingers again, demanding further listening. Ning's playing throughout is as lethally elegant as the album's design, making this one of the finest piano albums of the year so far.

Andy Kozar - A Few Kites Trumpeters around the world owe Kozar, also a member of loadbang, a debt of gratitude for commissioning ten count'em TEN terrific new pieces for trumpet and electronics. Kozar and his collaborators push the trumpet into realms of expressiveness not heard since Luciano Berio turned his attention to the instrument in 1984 for Sequenza X. Whether it's the first movement of Ken Ueno's Quentin, which literally deconstructs the trumpet, or Blister by Quinn Collins and on the imagined relations of night sounds (and silent darkness) by Paula Matthusen, both of which use field recordings and found sounds to interact with Kozar's gleaming tones, the variety here is simply astonishing. It's a well-sequenced album, too, reaching a perfect conclusion with Eva Beglarian's ruminative Osculati Fourniture, its use of modes from Persian classical music giving it a quality both ancient and modern. Let's hope other trumpeters pick up Kozar's torch and put these pieces into concert halls as soon as we're able to gather for live music again.

Dai Fujikura - Turtle Totem This expansive collection puts Fujikura's expertise in nearly every setting - from chamber to orchestral - on full display. Each piece is so assured, with architecturally solid structures, inventive melodies, and innovative instrumental approaches, that he makes everything sound fresh. Even something as hoary as the horn concerto gets a new injection of life from Fujikura's dedication to never taking the easy way out. The first piece, THREE, for trumpet, trombone, and electric guitar, is also a lot of fun, with Fujikura reveling in the sonic possibilities of each instrument. It was commissioned by Ensemble Three, an Australian group whose work I'm now looking forward to exploring. His hand is also sure when it comes to electronics, as on Obi, where he samples the sound of the sho, a traditional Japanese mouth organ played by Tamami Tono, creating drones and echoes to accompany the instrument. A quick look at his discography finds that Fujikura is remarkably prolific as well. Start here and then dig further into what's sure to be a rich seam of music driven by emotion and skill.

Collage Project - Off Brand Dan Lippel never ceases to amaze me. Even as he tirelessly enriches the musical universe with his work for New Focus Recordings, he finds time to make music as fantastic as this album, a collaboration with old friends, Aidan Plank (bass) and Dan Bruce (electric guitar), and guests. From the first track I knew Off Brand would be essential listening for any fans of Nels Cline, Bill Frisell, or others exploring Venn diagrams where jazz, prog-rock, and classical meet and meld. Lippel's For Manny combines his tart and swinging nylon string acoustic with Bruce's fiery electric, driven hard by Nathan Douds' splashy drums. It's a knockout, and the rest of the album, whether improvised or composed, remains at that high level while exploring different moods with an overall lightness of touch that's very inviting. All the playing is great, but Off Brand is especially a feast for lovers of the guitar in all its multifarious incarnations.

Matteo Liberatore - Gran Sasso Speaking of feasts for guitar fans, Liberatore's second solo album is made up of a single 20-minute piece that finds him dishing out a kaleidoscopic array of techniques. Virtuosic, yes, but all in the service of a melodic narrative at times reminiscent of Nino Rota's work for Fellini films and just as delightful. The title refers to the largest mountain in the Apennines, in central Italy, but Liberatore's piece is more like an absorbing walk in the forest rather than a difficult ascent - and it's a journey you'll want to take often.

Sreym Hctim - Turn Tail Perhaps most unclassifiable of all are the five surrealist sound collages on this second album from "Sreym." In fact, this stuff could almost be the endpoint of all music, period. Once the boundaries between sound, song, style, emotion, structure, and sensibility have been erased, it might sound like the work of Mitch Myers (read it backwards). While much of what Myers is doing here is wildly original, it does rhyme with some things from the past, such as Pere Ubu's Dub Housing or New Picnic Time, if you removed all song form, or Varèse's Poeme Electronique, if it had been made by a digital native rather than a pioneer of magnetic tape composition. But as Varèse himself famously said, "I experiment before I make the music," and one thing that makes these pieces work is Myers absolute confidence in his process. Give yourself over to it and you will likely follow my lead and order the expanded edition. Released on cassette, it includes a live set performed on WNYU, which even shows Myers weaving in strains of Top 40 pop and avant R&B. Get to Turn Tail to get on the pulse of what comes after what comes next.

Find samples from all these albums in this playlist - and remember, since the concert industry is shut down right now, consider buying anything you love to help support the composers, performers, and labels that make all of this magic happen.

You may also enjoy:
Of Note In 2020: Classical
Record Roundup: Contemporary Kaleidoscope

Posted by Jeremy Shatan at 4:20 PM