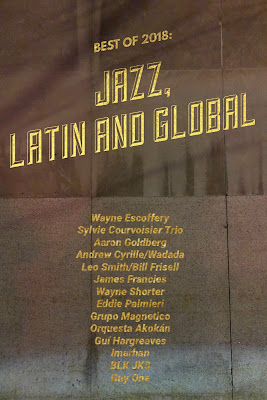 I sheared these genres off of the “Etc.” part of my last category, Rock, Folk, Etc., both so they wouldn’t get lost in the shuffle and also to provide a more cohesive listening experience for the playlist. Very little of this has been covered before on AnEarful - and some of it has also been missing from the lists I’ve seen that purport to specialize in these areas. Before I get to all of the new reviews, however, I must strongly remind you not to miss Guy One's stunning update on Ghanaian Frafra or Wayne Escoffery's smoking Vortex, both of which deserve a wider audience.

Sylvie Courvoisier Trio - D’Agala If Money Jungle, the 1963 album by Duke Ellington, Max Roach and Charles Mingus, is like a secret handshake among true jazz aficionados, then Courvoisier is definitely in the club. D’Agala, her latest album with Drew Gress (bass) and Kenny Wolleson (drums) seems to use the textures and interaction of Money Jungle as a launch pad for a glorious exploration of what the piano trio can do. It's possible that is all in my imagination, too, as each piece is dedicated to someone who has served as an inspiration for Courvoisier, from guitarist John Abercrombie to sculptor Louise Bourgeois and other cultural figures of all kinds. This has led to a variety of approaches with expansive, lyrical playing alternating with hard-bop swinging and even a touches of free jazz (on Éclats For Ornette) and chamber music (on Simone). But there’s not a false move on D’Agala and every piano trio from now on will have to confront what Courvoisier & Co. have accomplished here.

Aaron Goldberg - At The Edge Of The World One of the big stories in my world last year was the return of master percussionist Leon Parker to the New York area. His albums from the 90’s, especially Belief and Awakening, occupy a very special place in the musical firmament of my family, as does the man himself for visiting my son in the hospital when he was dying and later playing at his memorial service. So, that baggage puts perhaps more weight on this album than it deserves. Parker appears here in a trio format with Goldberg on piano and Matt Penman on bass, which is the same lineup I saw at the Jazz Standard last fall. In the live setting their balance between delicacy and intensity was exquisitely calibrated making for a thrilling performance. In the studio, it’s more of a slow-burn throughout and, although I can’t point to anything wrong with the album, it’s just not as gripping as I hoped after seeing them in person. So, maybe a live album next time? I’ll do my best to be in the audience!

Andrew Cyrille/Wadada Leo Smith/Bill Frisell -  Labroba Hard to believe this represents the first time Frisell, the protean guitarist, and Smith, trumpeter and composer extraordinaire, have worked together. All credit due to drummer Cyrille for bringing this project to fruition and thinking about the trio format in a brand new way. The music feels new, too: spare, elegant and emotionally eloquent. All three players contributed compositions, but the execution feels organic and collaborative, a beautiful example of collective dreaming by veteran players who have done it all before - except this.

James Francies - Flight On this debut from Francies, a well-traveled keyboard player and composer who’s worked with artists ranging from Pat Metheny to Chance The Rapper, he somehow manages to find a Venn diagram that includes the light and crisp sound of late Steely Dan and swirling intensity of Dark Magus-era Miles Davis. His use of electronics displays deep mastery as does his sparkling acoustic work. He’s also assembled a great cast of characters around him, with Mike Moreno’s guitar and Joel Ross’ vibraphone demanding mention. There are three highly distinctive vocalists featured as well, including Kate Kelsey-Sugg, who provides a credible alternative to Chaka Khan’s belting on a cover of Ain’t Nobody. That's just one of the improbable things Francies pulls off on the start of what should be a long and astonishing career.

Wayne Shorter - EMANON Far be it for me to tell Shorter, a sax legend now in his 80’s, to stay in his lane, but the much-hyped collaboration with the Orpheus Chamber Orchestra that makes up the first disc of this triple album is kind of a snooze. Pegasus, the first track, already had a definitive recording with the Imani Winds on Shorter's last album, 2013's Without A Net. Maybe the orchestral suite makes more sense if you have the graphic novel included in the physical release - I'll get back to you on that! More importantly, the rest of Emanon is live tracks recorded in 2015 at the Barbican Center in London with his all-star band of Danilo Perez (piano), John Patitucci (bass) and Brian Blade (drums). The same telepathic communication that defined their work on Without A Net is present here, making for a spine-tingling collection of exploratory improvisation. The basis for their ruminations include compositions and arrangements Shorter has been working with for many years, such as Orbits, first recorded with Miles Davis back in 1967, and the traditional song She Moves Through The Fair, last heard on the 2003 album Alegría. But there are no retreads here, just the sounds of fully engaged musicians at the top of their game.

Eddie Palmieri - Full Circle This gleaming update on eight classic salsa songs finds 81-year-old Palmieri in devastating form on piano and leading a band of elite musicians. Key players on every track are Luques Curtis (bass), Camilo Molina (timbales), “Little” Johnny Rivero (congas), and Nelson González (tres),  who provide a hypnotic underpinning over which Palmieri, along with the brass and reeds, can fly freely. Herman Olivera also does fine work on lead vocals. Muñeca is a perfect example, nearly ten glorious minutes of rhythmic bliss. If you’re not nearly overwhelmed by the power and precision at the end of the album, the big band version of Vámanos P’al Monte should deliver the coup de grace. You’ll die happy.

Grupo Magnetico - Positivo If Palmieri’s album is a black Cadillac, this UK-based ensemble is like a purple lowrider - a little cartoonish but making all the right moves. If the great New York salsa label Fania was signing new acts, they might have beaten Athens Of The North to the punch! Their cover of Papa Was A Rolling Stone is a perfect mission statement: broad, dramatic, funky AND funny. Apparently, they blow the roof off in concert - I’m keeping an eye out for that opportunity.

Orquesta Akokán - Orquesta Akokán I must confess a certain skepticism about the Daptone label’s soul revival stuff, even Sharon Jones. It’s all perfectly competent and can be fun in a live setting, but in the end, few truly memorable songs came out of any of those projects. Orquesta Akokán, whose debut is the first Spanish language album on Daptone, doesn’t have that problem. Made up of Cuban musicians young and old (including members of Irakere and Los Van Van) and recorded in Arieto, one of Havana’s legendary studios, this is the the album Buena Vista fans have been waiting for ever since World Circuit closed the door on the Social Club. With blistering arrangements by Michael Eckroth, fiery vocals by José “Pepito” Gomez and plenty of atmosphere, this should be at the top of your stack of party starters.

Gui Hargreaves - Rebento I’m always on the hunt for sparsely-produced Brazilian bliss and that’s the specialty of this young singer/songwriter from São Paulo. Every sonic touch added to his warm tenor and soft guitar is carefully considered to add to the focus on those basic elements rather than obscure them and let the melodies just flow. Hargreaves is not Jobim (but who is?) so the songs are fine, if unlikely to take the world by storm on their own. It's really all about the mood - and it's a mood you'll want to return to often.

Imarhan - Temet These young Algerian nomads have figured out how to breathe new life into the desert blues paradigm pioneered by Tinariwen and others by injecting British Invasion riffs and Dennis Coffey car chase attitude into their sound. The result is ride that’s hypnotic, gritty and funky as hell - buckle up!

BLK JKS - The Boy’s Doin’ It I wouldn’t normally include a single here, but the return of these South African Afro-psych-legends-in-my-own-mind after eight years is worthy of special attention. I mean their only LP, After Robots, was my #1 album of 2009, ferchrissakes! Anyway, this cover of the Hugh Masekela classic was facilitated by Alekesam in tribute to the master, whose trumpet is woven into the mix, but when the horns and guitars start cooking you know it’s all BLK JKS. And if you’re like me, you’ll say “Damn, it’s been way too long!” before playing the song twice in a row. Okay, three times - but who’s counting?

Listen to tracks from all of these albums here or in the playlist below. You can also hear more in these areas by checking out the archive and by following Of Note In 2019: Jazz, Latin & Global.

Posted by Jeremy Shatan at 7:14 PM