From Warhaus To Your House 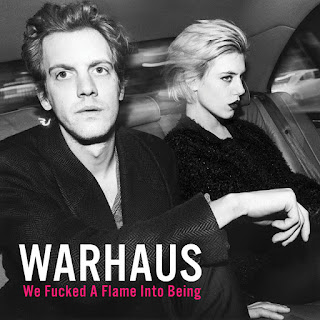 At this late, post-postmodern date, most hints of originality come from putting old things together in new ways. Another way to spin things anew is by drawing on aspects of influential figures that may seem secondary to most. For example, if I told you that Maarten Devoldere's new project Warhaus was indebted to Leonard Cohen, you might first think of poetic lyrics, then a certain bruised romanticism, and finally an unconventional voice unafraid of its own limitations. While those facets of the late, great Canadian are indeed part of what makes Warhaus's album, We Fucked A Flame Into Being, a masterpiece, the first thing that came to mind as it revealed itself to me was Cohen's louche, Euro swagger. This kind of confident, stylish magnetism is all too rare in rock these days, more often evident in hip hop and R&B.

Devoldere's other avatars on WFAFIB are Coney Island Baby-era Lou Reed, the Iggy Pop who waxed Tonight and Turn Blue, Dylan's dry, snarling wordplay, and the Stones at their most outré. If Bowie's Dirty Boys made an album, it might sound a bit like Warhaus. These aren't necessarily the overused influences most people draw from these artists, which is refreshing. Even if these touchstones are familiar they feel new here, partly as a result of the sound of the record. There's an almost tactile quality given to the air between the instruments which, could be due to the fact that  - if this short and brilliant documentary is to be believed - much of the album was tracked on a slightly broken down river boat in Belgium. Groovy percussion (gotcher cowbell in spades), spidery guitar, propulsive rhythms, and heavily processed horns are all sonic signatures that make Warhaus distinctive.

There's also Devoldere's tight songwriting, which would make these songs memorable even if he bashed them out on a guitar with four strings and a couple of bullet holes. He's been honing his craft for a while as a member of Balthazar, a solid if somewhat unfocused indie band from Brussels. The attention they've attracted, mainly in Europe, is no doubt a credit to more than just being the most rocked up thing from Belgium since Plastique Bertrand. But Devoldere's time on the river has elevated his art into the highest echelons, launched on gloriously shocking lines like "I've got one hand on a Champagne-drinking cunt/I've got the other up the ass of the establishment/And I can't even distinguish which hand is which/God knows, I tried to be against the rich."

The fact that he can spew such a bilious screed while still maintaining our sympathies is another indication of the razor's edge Devoldere rides throughout the album. At the end of Lady Chatterley's Lover by D.H. Lawrence, from whence this album's title comes, Mellors writes to Connie: "We fucked a flame into being. Even the flowers are fucked into being between the sun and the earth. But it's a delicate thing, and takes patience and the long pause." So if you get a little burned or bloody while listening to Warhaus, be patient and let the blossoming beauties within heal you. Besides, you were warned that rock & roll is dangerous.

Posted by Jeremy Shatan at 8:24 PM