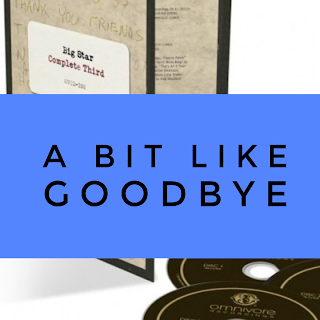 "This sounds a bit like goodbye
In a way it is I guess
As I leave your side
I've taken the air
Take care, please, take care"
- Alex Chilton, Take Care

After the Velvet Underground emerged from the mists of legend and a mostly out-of-print catalog, the next white whale was Big Star, arriving on the horizon of my consciousness through pre-Internet research, tipped off by The Replacements. This consisted of looking through defunct editions of the Rolling Stone Record Guide and the magazine collections my friend Mike and I found in our older brothers' closets. I distinctly remember reading an article about Tim Buckley in Creem and thinking "Is this a hoax?" It was years before I heard the glorious reality, but that's another story.

I did find some references to Big Star, just tiny glimpses usually including the words "power pop" and "Beatlesque." When I finally heard anything it was just a few songs on an Alex Chilton compilation someone had. Kizza Me was on there, and Downs, but it was mostly shambolic solo songs like Bangkok and Like Flies On Sherbet, most of which I liked in various degrees while remaining unaware of the provenance of any of the material. Kizza Me was especially great, sort of a Stooges song for daydreamers, with bonus cello. As far as influences go, I could hear a hint of The Beatles, especially in Chilton's high, vibrato-less tenor and his way with a melody. I was also distracted by trying to connect this guy with the guy who sang The Letter by The Boxtops. To be honest, I'm still working on that part.

Time went on. I got married, got a CD player, felt lucky to find Pere Ubu and Wire on the shiny plastic discs, but still no Big Star. Then Rykodisc came on the scene, sort of a Criterion Collection (yes, I eventually got a laserdisc player, too) for music, with beautifully presented reissues that included all kinds of extra stuff. Which is how it came to pass that my first extended exposure to Big Star was via a semi-misrepresentational latter-day collection called Third/Sister Lovers.

It's slightly ironic that what had for years been a holy grail/stepchild for Big Star fans (notwithstanding a limited release on PVC Records) was right there in Tower for $18.99. And it was fantastic, if a bit messy. Songs like Thank You Friends and Jesus Christ were instantly indelible, sing-in-the shower classics, while Kangaroo, Holocaust, and Big Black Car were grimly gorgeous ventures into the heart of darkness. I was hooked and evangelized heavily, killing music by passing out many homemade cassettes. The indie-level success of Rykodisc's reconstruction was unharmed by my piracy and finally led Saul Zaentz to stop not dancing and let Fantasy reissue Big Star's Number One Record and Radio City on one CD.

That's when the true majesty of Big Star exploded in my living room. September Gurls, Feel, 13, Back of a Car, In The Street, Feel The Sunshine. I nearly wept at the unrecognized genius contained therein: here was the Beatlesque power pop I had been promised and so much more. How could these records have failed? No wonder Chilton was going blotto and singing about Holocausts a couple of years later. Reading the credits educated me to the fact that there were actually three Big Stars: Mark I with Chris Bell making it a quartet and playing McCartney to Chilton's Lennon - or was it vice versa? Then there was Mark II, a trio after Bell and Chilton parted ways, Andy Hummel and Jody Stephens still holding down the rhythm section. And then there's Mark III, which was whatever the hell is happening on Third/Sister Lovers.

Now we have the final word on that period in Omnivore Recordings magnificent three-disc set, Complete Third. Interestingly enough, Chilton wasn't even sure this was a Big Star album he was making. Jody Stephens was still there, drumming on some songs (and contributing the sweet yearning of For You) but there was no band per se, just a rotating cast of Memphian characters, most notably production savant Jim Dickinson, bringing to fruition an astonishing batch of Chilton originals.

Just how amazing the raw material was is fully evident on Disc One, which features mostly solo demos with Chilton accompanying himself on acoustic guitar or piano with occasional overdubs. Many of these were available on Keep An Eye On The Sky, the lavish career overview that came out in 2009, but I admit to rushing through them at the time. It may have been that I thought them superfluous or I just got overwhelmed by the wealth of material, including a wonderful live show from 1973, which became a daily listen. But now their brilliance has fully dawned on me. In fact if these recordings were as far as Chilton got they would constitute a great lost album in their own right. The sheer musicality that pours from Chilton will stop you in your tracks - remember to breathe while listening.

If anything, Chilton had grown as a songwriter, having lost some of the tics that showed up on the first two albums, making for songs that are elegantly constructed, curvaceous yet sturdy like Art Deco sculpture. As Chris Bell noted at the time, Chilton had come even more under the influence of Lou Reed and the Velvet Underground, adding both toughness and despair. There are strong emotions animating them, but there's also a sense of distance, as if Chilton was holding the feelings at arm's length. These are rough drafts, yes, with some vocal hiccups and the obvious awareness that arrangements would put flesh on their bones, but this is what co-producer/engineer John Fry, who had also worked on the first two albums, and Dickinson had to work with.

We can also hear a taste of who Dickinson and Fry had to work with on a track called Pre-Downs, a bunch of enervated noodling with someone (mercifully off mic) murdering T For Texas while Chilton giggles. Eventually he calls for Baby Strange, the T. Rex song, and it's awful, out of tune and ragged, finally breaking down entirely into a drum solo until Chilton yells "Enough! Enough of this drum ego trip!" Not exactly what you'd hope for from a guy who'd been in recording studios since his teens. According to Cheryl Pawelski, whose archival work here should earn her whatever awards are given for that sort of thing, this is just a small excerpt - and it's quite enough.

Then we get the first band demo of Big Black Car and it's not much better. Chilton sounds barely interested, even contemptuous, turning the bridge into a spoken word joke. After a few listens it occurred to me that he might have been terrified. He must have known that he had a batch of great songs, some even extraordinary, but he'd been there before, in that same studio, slaving over brilliant material, and look where it had gotten him. The self-doubt could have been crippling, wondering if by trying to produce final versions of these songs, he was killing them, like gassing butterflies just as they emerge from their cocoons.

But he powered through, numbed out on downs ("our favorite kind of drug," reports Lesa Aldridge, Chilton's girlfriend at the time - and co-writer of Downs, the wacky, sardonic song that arose out of that jam and kicked off the project) and drink, and aided by the heroic efforts of Dickinson and Fry. Gradually, things began to take shape, with Dickinson's intuitive methods bringing songs like Kangaroo and Holocaust into new sonic territory, with spectral Mellotron and spidery guitars, and Fry's pop classicism adding backing vocals and concision.

Through various rough mixes and alternate takes we get an X-Ray of the choices made along the way, and they were mostly good ones. Jody Stephens made a crucial contribution when he asked a string arranger to sweeten up his song, For You, which we also get to hear Alex sing in a pretty good version, heard here for the first time. Chilton liked the sound so much that he had strings added to a number of songs, becoming a key part of the sound. This is how Lovely Day became Stroke It Noel, named for the violinist on the song. Probably the biggest quibble I have always had is with the final version of Femme Fatale, which I never fully bought into. The acoustic demo was not improved by Stax guitar legend Steve Cropper jumping on the track or by Aldridge's unnecessary "Elle et un femme fatale" on the chorus. It reminds me of the time Paul McCartney tried to "improve" Don't Let Me Down with vocal counterpoint. Lennon was wise enough to put the kibosh on that - apparently Chilton was going to do the same but Dickinson convinced him otherwise.

Even in his damaged state, Chilton managed to participate quite a bit. "Let's start off with just a verse of me playing the guitar," he says at the start of the "Dickinson Rough Mix" version of Take Care, "and everybody fooling around, and we'll save that for some kind of juicy little instrument later, okay? So y'all fall in." This was the germ of an arrangement that would become a chamber-pop gem in the final version, with strings and horns providing the "juiciness" Chilton envisioned. This is just one example of the transformations we can now hear happening before our ears, the butterflies spreading their wings.

But to describe Dickinson and Fry's work as heroic does not overstate the case. They polished up the songs, sequenced them, made a test pressing, and shopped it around. That turned into a farce as they were met with derision and contempt by people like Jerry Wexler. Chilton was out of the picture by that point, too dissolute to do more than weakly protest their efforts, never approving of a sequence, a title, or cover art. His career, such as it was, never recovered until a late career lionization that was well-deserved - and sometimes great - but based on past glories. He never wrote songs this good again. (Solo Chilton boosters - feel free to write your hate mail on a box top and send it to the Dead Letter Office).

In any case, thanks to Omnivore's efforts, I can now make my perfect version of Third. It will include the demo of Femme Fatale and get rid of all other cover songs, especially the rotely rocking Whole Lotta Shakin' Going On. Newly unearthed versions of I'm So Tired, Don't Worry Baby and After Hours, all featuring Lesa on vocals, are intriguing but certainly not final cut material. You can hear my version here or below - feel free to share yours.

So is Third or Sister Lovers or whatever you want to call it a Big Star album? The closest I can come to a definitive answer is that it is a collection of songs written by Alex Chilton in a style reminiscent of Big Star. Or maybe I should just quote Kizza Me's insouciant rejoinder and say "why not?" You might also ask if this essential reissue is overkill for the casual Big Star fan - but have you ever met a casual Big Star fan?

You Might Also Enjoy:
Power Pop To The People

Posted by Jeremy Shatan at 5:11 PM