Kanye And The Converted 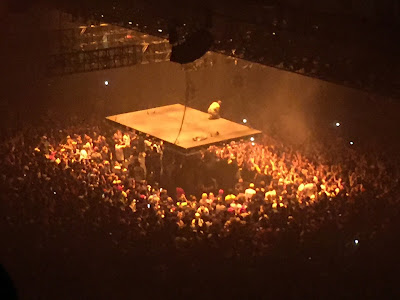 I don't make a habit of unfriending people for having contrary opinions. However, this resolve is not tested often as it just so happens that at least 90% of my social (media) circle is made up of left-leaning, pro-choice, anti-LGBTQ discrimination, pro-civil rights social justice warrior types. But there's one hot button issue where I feel like a minority in my own newsfeed: Kanye West. While I value my friends and acquaintances for other reasons, the unfortunate fact is that some of them have no problem parroting commonly held groupthink about Kanye, namely that he is no-talent, idiotic, egotistical jerk. While I can't necessarily defend his actions in some cases, I will speak up for the records as I have formed a deeply personal relationship with most of them.

Even so, I didn't realize I was feeling musically oppressed until I walked into the sleekly renovated halls of Madison Square Garden one recent evening and found myself surrounded by thousands of Kanye fans - and they were amped. There was an excited buzz and sense of camaraderie even among those on the hideously long lines for merch. A security guard noted my Mobb Deep t-shirt and I said "Yes - I thought I'd bring some New York flavor to the show." "You actually listen to this stuff?" he asked. "Hell, yes," I responded, "I've been listening to hip hop since the days of Grandmaster Flash & the Furious Five!" These are my people, I thought, and it felt good, even before I knew what the night held in store.

Let me rewind for a second. A week prior, I had no idea I was going to see Kanye. Tickets went on sale in the spring and just couldn't plan that far in advance, especially with all the college tours we knew were on the horizon. Also, I had already bought tickets for Dylan and Mavis Staples at Tanglewood and wasn't sure I had another big ticket concert in me, especially with the prospect of a bot-fighting refresh refresh REFRESH session on Ticketmaster. I heard the concerts sold out in seconds. My nephew had managed to secure a block of tickets for my sister's family - on three different nights in three different cities. I was glad to avoid that kind of drama.

Then, the Friday before Labor Day, I got an email from Ticketmaster telling me new seats had been released. Feeling skeptical but spontaneous, I clicked the link - and saw row after row of seats at $226 per. Not happening. In a last ditch click, I re-sorted the list low to high and voila! Affordable seats! They were high up and described as "rear view" but having read the review of the opening night I didn't think that was important, with the moving stage and everything. After a quick consultation with my wife, I pulled the trigger on tickets for me and my daughter.

So that's how we found ourselves in the 413 section of the Blue Seats in MSG, watching the crowd assemble to a soundtrack of ambient, ominous sounds reminiscent of the darker moments from Fripp & Eno's Evening Star. Fog machines started up, adding to the sense of anticipation and mystery. There was a swirl of activity around us as people repeatedly took the wrong seats and then had to relocate when the actual ticketholders showed up. These transactions were all uniformly polite and good humored. There were no grievances in our little section of the venue - I've been to opera performances where the crowd was less well-behaved. Filling the arena was a slow process but it gave us an opportunity to observe the massive rig Kanye's crew had assembled around and over the floor. We watched as black clad technicians wearing harnesses took their places high in the rafters and contemplated what their nights were like, huddled at great heights near the roof of one arena or another.

Finally, at about 9:45 PM, the fog machines kicked into overdrive, the lights blacked out and the crowd went nuts. I could just barely make out the platform closest to us tilting backwards into a cloud of smoke. When it returned to level, Kanye was there and the excitement exploded as everyone jumped to their feet, cheering louder than ever. Father Stretch My Hands, Pt. 2 kicked in, Kanye began rhyming, and the entire crowd - about 20,000 people - matched him word for word. It would have been thrilling even if Kanye's platform hadn't began moving over the floor, illuminating the masses underneath as they writhed manically, dancing their asses off. Smartphones went up all around the arena, looking like beautiful constellations and giving the lie to all those artists who would ask you to check your device at the door of the show.
By the second song I realized the brilliance of Kanye's conception: he had made the crowd into the show. Considering how often the charge of egotism is lobbed at him, it was almost ironic how much the concert invited our participation and elevated the individuals in the audience, transforming us into full participants, especially those on the floor. On more than one occasion, Kanye even began a song again so the sing-along could kick off in unison and we could all be together.

Unlike his recent rambling and unfocused remarks at the VMA's, Kanye was in full command of his performance, barreling through songs in quick succession, dancing athletically in a fashion that did not seem overly choreographed while making full use of his tethered status on the platform. He only let up during the couple of moments when his platform would retreat to the end of the arena to allow for an enormous central platform to engage in a sort of ballet mecanique, twisting and turning this way and that, illuminating different sections of the audience with banks of spotlights.

Kanye also pushed the limits of his constant near-accessibility by lying down on the platform and extending a hand to the gyrating masses. Even this gesture felt humble rather than magisterial and electrified the whole arena. About a two-thirds of the way through, Kanye also revealed that he wasn't alone after all, shouting out singer Tony Williams, who has provided hooks since West's first album, and bringing up the lights at the south end of the arena to reveal his band. I couldn't see what configuration he was using but it looked like more than just a DJ and a vocalist. The setup also included the usual giant screens, but instead of giving close-ups for those far from the action they displayed artfully distorted visions of what was taking place down below. 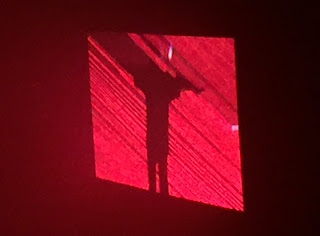 While the staging felt like the future, the setlist took judicious turns to Kanye's past, with killer takes on Can't Tell Me Nothing, Power, Heartless, Blood On The Leaves (a daring choice) and especially the mighty New Slaves and Jesus Walks. If any song in his catalog was meant to be sung by 20,000 people it was the latter - indeed, that may be the definitive way to experience this classic track. Naturally, there was a big helping of The Life of Pablo, whose scattershot songs ended up working great in concert, with the possible exception of Wolves, which was slightly stilted out of the studio.

Kanye sequenced the show like a great mixtape, dropping in THat Part, the Schoolboy Q song-of-the-summer on which he has a feature, and ending with Ultralight Beam, Pablo's opening cut. As the over-the-top gospel stylings filled the arena in a way that was almost overwhelming, the fog grew in intensity and Kanye's platform parked itself at one end of the floor, tilting backwards in a mirror image of his arrival. Then the lights came up and he was gone. Kanye had left the building.

Would I have stood for another song or two? Sure. But this was more memorable and as they used to say in vaudeville (and probably at Shakespeare's Globe or even the theaters of Ancient Greece): Always leave them wanting more.

The glow of the night continues to echo in the days since, armoring me against my naysaying friends. I don't think I'll have any problem laughing it off the next time one of them gets apoplectic about something stupid Kanye said. I've been to the show and they can't tell me nothin'.

You may also enjoy:
A Vacation In Hip-Hop Nation
Posted by Jeremy Shatan at 8:27 AM