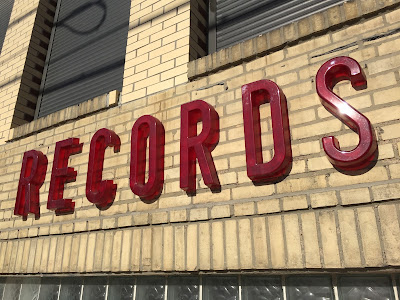 There is a lot of vinyl in the world, and much of it is by Roy Ayers (and much of the rest is by Willie Bobo). That was one conclusion I came to while flipping through the stacks of wax at Superior Elevation Records in a gritty section of Bushwick this past Record Store Day. I now understand why Ayers called his group Ubiquity. I also now realize that I don't know much of his music, which is a failing I plan to rectify thanks to Spotify.

Speaking of the streaming service, it has forever altered the way I shop for vinyl. Now I have an ongoing calculation in my head, with some kind of equation of desirability, availability, price, and condition helping me determine how I will ultimately allocate my limited budget of both cash and storage space. The end result of all of this sorting is another dialogue in my head relating to all the records I don't choose to buy, a dialogue that mostly dissipates at the end of the shopping trip. Not this time, though. Using my search terms in Spotify, I reconstructed the trail I followed as I flipped and flipped, creating the playlist below. So now I - and you - can follow up on those tangents.

But fear not, record stores, I am still interested in buying and my time at Superior Elevation led to some very happy purchases. In fact, my wife declared it my "best Record Store Day ever!" Part of the credit goes of course to the shop itself, which is spacious, well-organized, and friendly. Superior Elevation was my favorite vendor at last year's Brooklyn Flea record fair, so I had been meaning to get out there for a while. Their RSD event was a draw, as they were celebrating their first anniversary with a rotating cast of DJ's, sales, and freebies. I also had a 15% off coupon they had given me at the Flea - good move.
Within minutes of entering I had my hands on a copy of Fotheringay's first album, which is something I've wanted for a while. Fotheringay was the band formed by Sandy Denny with Trevor Lucas after she left Fairport Convention and I like it better than anything by that band, with one perfect song after another.It wasn't the original pressing but a nice reissue on Carthage from the 80's, complete with the gatefold cover. Score.

I went through the rest of their rock section but, let's face it, that's the bread and butter of my collection. Superior has a standout soul-funk section, though, so I was elbow-deep in there for a while and finally ended up with Law Of The Land from 1973 by The Undisputed Truth. For some reason, this 70's Motown group has been left behind in the reissue boom, with much of their stuff beyond the greatest hits (Smiling Faces Sometimes, for one) largely forgotten. The thing I love about them is that they were the perfect laboratory for psychedelic-soul genius Norman Whitfield. He just lets every epic, widescreen impulse burst into perfect reality, as on the title track. There's also a great cover of Dave Mason's Feelin' Alright, which is one of those songs I can't get enough versions of. Sold.

Next up was reggae, which was a smaller section but full of interesting stuff, much of it pricy. I was very intrigued with a Gregory Isaacs collection but double checked and found that I already have it with a different cover - saved by the internet! I did find a real gem though, a Jamaican pressing of Derrick Harriott's 14 Chart Buster Hits, which is a stunning retrospective of the seminal singer-producer's biggest songs from 1962-71, including great takes on Close To Me and Have You Seen Her, along with a number of sweet self-penned tunes, many of which should be revived by contemporary singers looking for something new.

While I was looking through the jazz, the DJ was playing a fantastic late disco song that had me dancing. I asked him what it was and it was nobody I had heard of (but wish I could remember!), but he added "It's really a lost Leon Ware album," referring to the singer-songwriter-producer best known for his work on Marvin Gaye's I Want You. Before going to pay, I casually thumbed through some sale items, coming across Nuff Said, which may the great lost Ike & Tina album - coincidentally featuring six Leon Ware co-writes. It was kismet and it was $2.00 for a super-funky and consistent album. Done deal. 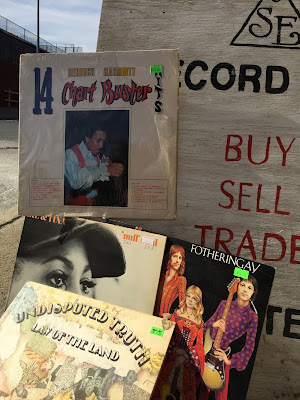 Another conclusion I came to before paying was that if you have any vintage Brazilian or African vinyl, you can practically name your price. I will not be cashing in on my Chico Buarque albums anytime soon, however - I like them too much! In contrast to that very expensive stock were the free albums on the sidewalk, many put out to pasture due to their rough condition. One I'm glad I grabbed was Chico Hamilton's El Chico, featuring the great Gabor Szabo on guitar, shining especially bright on a sublime version of People. Some of the album, in original mono, is unplayable - but I might never have heard it otherwise. That's the magic of record shopping, and I got a big hit of it on Saturday. How did you spend the day?