The Inspired Viola Of Melia Watras 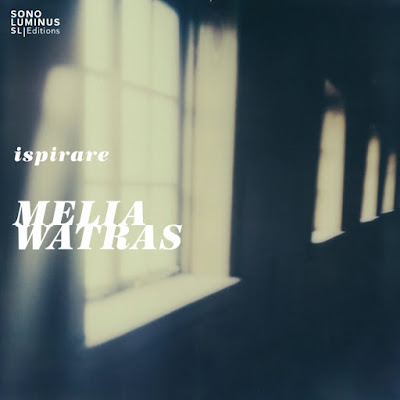 Earlier this year, I reviewed Orli Shaham's Brahms Inspired, which featured new compositions alongside the works by old Johannes that sparked their creation. This may be an idea whose time has come as we now have Ispirare by violist Melia Watras, which features two newer works and the pieces that inspired them, plus a bonus Watras was inspired to record because of the inspiration of one of the new composers. Got that?

To quote Julian Craster, the composer from The Red Shoes, "Nothing matters but the music!" - so let's get on with it. The first piece is George Rochberg's 1979 Sonata, performed here with accompaniment from pianist Winston Choi. Rochberg was an American Serialist who famously rejected that controversial form in the 1960's and turned to a sort of mid-century neo-romanticism. In practice, at least in the Sonata, that ends up sounding a bit like 1950's Shostakovich, with sharp dance rhythms and broad melodic statements. While it is not a particularly memorable piece, it's a perfectly pleasant and honest listening experience.

What really shines in the Rochberg is the performance and the recording. Ispirare is on the Sono Luminus label, which first came to my attention with In The Light Of Air, a staggering album of Anna Thorvaldsdottir's work performed by the International Contemporary Ensemble. [I should review it, but in case I don't have time here's the rub: GET IT.] Like that record, Ispirare is distinguished by a stunning recording, which translates in this case to a real sense of the personality of not only Watras' playing but of her instrument itself. In short, you can hear the wood, in all its depth and humanity. This is something richer than "perfect sound" and on a good system it's astonishing.

Of course, you can only pay attention to the sound because Watras and Choi are such consummate musicians. It's a shame Rochberg didn't live to hear their performance - I doubt it can be bettered. Speaking of Choi, thanks to the liner notes I will now be seeking out his release of Elliott Carter's complete piano music. However, he is absent on the Rochberg-inspired Caprice Four (George) by Atar Arad, a composer who also taught Watras.

This short piece, from 2003, is one of a series of a dozen caprices Arad composed as "thank you notes" to composers he admired. While he quotes from Rochberg, the mood of his work is entirely different, with an elegiac and mournful turn and much less adhesion to conventional form. Arad also makes good use of the edges of the Viola's sound and Watras brings his music to life with ease.

No disrespect intended, but both Rochberg and Arad are quickly forgotten when the plainchant opening of Luciano Berio's Black is the color... cuts into the atmosphere like an ancient scimitar. This is just a small part of Berio's Folk Songs project but it may be the most essential. Unlike Rochberg, Berio never tied himself to any movement whatsoever, confidently pursuing his interests wherever they led him.

A quick survey of recordings of the Folk Songs finds a lot of issues, either with the sonics or the vocal approach. Watras has not only Sono Luminus on her side but also singer Galia Arad (yes, Atal's daughter...small world). Galia has established herself not only as a singer with a tone both lush and direct, but also as an accomplished songwriter. This gives her the freedom to settle into the structure of Berio's conception without concern about "classical" vocal style. She is understated but strong, more than a match for the searing, soaring playing by Watras. It's less than three minutes long but you will beg for hours.

Berio's song was the choice of Shulamit Ran, a Pulitzer Prize-winning composer with roots in Israel. In tribute she came up with Perfect Storm, a 10 minute long solo viola piece that should be quickly taken up by players on the hunt for such repertoire. It feels like an expansion of the slight brutality of the Berio, very song-like and in no way polite. There's an emotional savagery to it that is very satisfying. This world premiere recording sets a high bar but I am hopeful that Perfect Storm will find its place in the culture.

As mentioned above, Watras was so enamored of Ran's choice that she picked another Berio piece to end the album. Titled Naturale (su melodie siciliane), it is a continuation of his work with folk idioms, although with a southern Italian flair as opposed to the Appalachian bent of Black is the color...  Naturale, at 20 minutes the most substantial piece on Ispirare, features percussion (well-handled by Matthew Kocmieroski) and a startling recording of a Sicilian folksinger singing guttural Italian phrases from time to time.

But the viola is the star and you feel Berio reveling in its dark and dimensional timbre while exploring its considerable range. Watras feels completely at home in Berio's world, carving her line in the ether like a rivulet of lava in a mountainside. Her performance here has left me desperate to hear her take on Voci, Berio's full-scale viola concerto. While she's at it, she could assay his Sequenza VI for solo viola. Boom - I've just planned out her next album.

And that's really my only quibble with Ispirare. The Berio-Ran-Berio sequence of the second half is so much stronger than the Rochberg and Atar that the album feels slightly unbalanced. Maybe a playlist with the last three tracks first, leaving the Rochberg and Atar as a palate cleanser would make more emotional sense. But listen for yourself first, and soon. Don't let my critical inquiries come between you and some very fine - and inspired -  music.