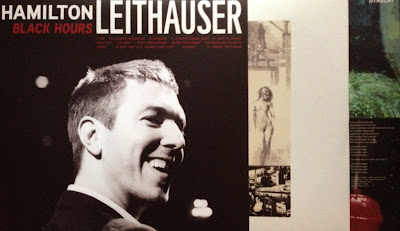 Listen. It's a storyteller's trick, this command to lean in and pay attention - it may just now have worked on you, in fact - and one Hamilton Leithauser deploys with great effectiveness in 5 AM, the opening song from his brilliant debut solo album, Black Hours. "Listen...summer's coming," he intones to the accompaniment of piano and strings, "Slow down...don't chase crowds,'cause I'm right here." It's a mini-overture to both song and album in which he's literally instructing you how to engage with his music. Then the arrangement of strings and winds gains fervor along with his voice: "Do you ever wonder why I sing these love songs? When I have no love at all? Is the life you seek filled with senseless ease? Do you need someone just to cool your blood?" The rhythm section of upright bass and tambourine brings Kurt Weill to mind - but with lyrics by Faulkner and sung in a gleaming tenor to pierce your heart.

Of course, it's all a feint - "I'm right here," he sings, all the while he's constructing this lovelorn persona. Call him "Hamilton Leithauser" if you want to distinguish him from the actual person of the same name. Observed from the outside, Hamilton Leithauser (the real one) seems to be someone who values deep human ties and connections. After all, his wife, Anna Stumpf, sings on one track and has been on tour with Leithauser, playing keyboards and singing back up, while her brother, Nick, is the tour drummer. Paul Maroon, who co-produced and plays guitar on most of Black Hours, is, like Leithauser, an ex-member (or on "extreme hiatus" from) The Walkmen, the band they formed in 2000.

The Silent Orchestra picks up the pace, almost like a film's first scene after the credits. Leithauser's string arrangement has the sweep and pluck of an old Peggy Lee number, with piano and Marimba upping the bounciness. "When you get bored of your mind, come and find me," Leithauser sings, issuing the invitation with which all art summons us. The combination of the two-step beat with the dark and vaguely surreal lyrics is incredibly effective. This is a landmark song. As thrilling as it has been to hear Leithauser's development over the course of The Walkmen's catalog, he's taken another leap here.

The third song, Alexandra, is one of two produced by (and co-written with) Vampire Weekend's Rostam Batmanglij. It's shamelessly romantic, with a huge beat, wheezing harmonica, and Batmanglij's irrepressible backing vocals. Like their other collaboration, I Retired, it's one of the lighter tracks on Black Hours. In the movie I'm creating in my mind around the album, these two songs are performed by the character onscreen as he tries to get his life back on track.

11 O'Clock Friday Night returns us to the more subtle and complex sound of the first two songs and has quickly become an essential part of my musical life. Some compositions just entwine with your soul in an ineffable way, like they've always been there just waiting to be heard. Morgan Henderson, of Fleet Foxes outdoes himself here, playing bass, percussion and marimba. Both he and Richard Swift, who drums on most of the album, are as important to Black Hours as Leithauser and Maroon. That said, St. Mary's County finds Leithauser in full crooner mode, singing over piano and strings. As on the rest of the album, his phrasing is precise and original.

Self Pity begins with a ghostly sound that leads into a two-note riff, with Leithauser singing in a spooky high register. Halfway through, a near reggae beat is introduced along with a dub influence. It's entirely unexpected but feels completely inevitable. Writing a song with a turn like that is a sign of real skill, and one Leithauser pulls off on more than one occasion. I Retired does it, too, sliding into a woozy singalong that wouldn't be out of place if sung by Elvis Presley with The Jordanaires. It's just to the right side of jokey, and sensibly fades out.

I Don't Need Anyone has a patented Maroon guitar figure that any fan of The Walkmen will find familiar. Leithauser gives his all, powering over the strings and organ. "Don't know why I need you. I don't need anyone," he sings, a universal cry of the lonely person trying to put a brave face on their solitude. Even if you know Leithauser's wife is right there with him in the studio, singing back-up, you believe every sad word "Hamilton Leithauser" sings. Bless Your Heart stars out in a ruminative mood, pushed along by Morgan Henderson's bongos and Amber Coffman's dreamy vocals. Then the beat picks up in another one of Leithauser's crafty transitions, with the song gaining a epic fervor as he wails wordlessly. Another spellbinding song and one that will stay with you.

Unless you have the deluxe version of the album, The Smallest Splinter is the final song. It features an indelible melody and finds "Hamilton" seeking redemption ("Give me a kiss and tell me I'm alright) and forgiveness ("Show me the man who never disappoints"). It's a fitting end to Black Hours, completing a satisfying song-cycle and a strong argument for the album as a form. And yet...the vinyl release comes with an additional four songs on a one-sided 12" (also included in the tracks available for download in a variety of formats using the code provided). They're also available on iTunes and I strongly recommend that you make the investment one way or another.

These are in no way B-sides. All four songs are as strong as anything on Black Hours proper - in fact they may be more essential than the two Batmanglij songs. Not only do they occupy the same emotional territory, they expand the sonic palette a bit, whether via the the hymn-like horns of Waltz or the Neopolitan sweep of In Our Time (I'll Always Love You). The latter song also contains a hopeful ending to the movie in my mind: "Today is the day/That we're starting again/If I don't look the same/Well that's gotta be a good thing." Utrecht, however, finds "Hamilton" alone again, with just his acoustic guitar and a bed of strings, and the final final song states bleakly I'll Never Love Again. The story, if there is one, fills in a little here: "You liked your hollow world/I guess you're just that kind of girl/And now you'll never know why/ You were thrown to the dark/from the center of the spotlight," and finally: "Your songs may live on, but I don't sing'em." Credits roll, and the silenced audience files out of the theater.

Black Hours is the culmination of everything Leithauser has been working toward over the last few years, a vision of timeless, elemental singing and songwriting that harkens back to the past while remaining resolutely of the present. His work here vaults him to the highest rank of contemporary artists, and one with a bright future irregardless of what happens with The Walkmen. He can deliver this material live, as well, based on the short set I saw at the BAM Harvey Theater as part of WNYC's Radio Love Fest. The charming suavity he displayed with The Walkmen was still in full effect along with a coiled excitement about his new songs. The band was great and will likely get tighter with a little more time on the road. They'll have plenty of opportunity as he is touring extensively throughout the summer and fall, both on his own and opening for Spoon and Broken Bells.

And what of the othe members of The Walkmen besides Leithauser and Maroon? None of them are sitting on their hands. Revered drummer Matt Barrick is also a talented photographer and will surely have no trouble getting session work. Peter Matthew Bauer and Walter Martin, who shared bass and organ duties in the band, have new albums of their own out, with varying success. Martin's record, We're All Young Together, calls on a who's who of indie rock (Karen O, Nick Zinner, Matt Berninger, Alec Ounsworth) to put across songs supposedly for the whole family - to my ears it's a smug as a Laurie Berkner album, from the overly cute lyrics to the affectedly casual way he sings. Not for me. Bauer's Liberation!, however, is an appealing and slightly ramshackle affair, with hints of the folkier sides of The Rolling Stones and The Faces. His voice is very relatable, reminding me of Paul Westerberg at times, and the songs are sturdy and sometimes soaring. It's a solid, enjoyable album and seems to hint at more places to go for him.

Posted by Jeremy Shatan at 9:59 AM