Buzz Buzz In My Eardrum

It was the most buzzed about show of the...week? Month? Day? Either way, the buzz for me was only about one of the three bands playing at Bowery Ballroom last Thursday: Parquet Courts. In fact, I had bought the tickets with nearly complete ignorance of the other two bands on the bill, Nude Beach and The Men, the ostensible headliners.

I had fallen hard for Parquet Courts back in January, when What's Yr Rupture reissued their debut album, Light Up Gold. Their songs distill early Pere Ubu, Wire and Velvet Underground, with a little of The Strokes and The Walkmen tossed in, into a fresh, driving sound. The accomplishment of the music, with it's tight rhythms, canny guitar interlock and contrasting voices, is nicely contrasted by the slacker aimlessness of some of the lyrics. Many of the songs are short, so Stoned & Starving at 5:11 stands out. At whatever length it would be an instant New York anthem: "I was walking through Ridgewood, Queens/I was flipping through magazines/I was so/Stoned & starving." Just try not to sing along.

Everything pointed to Parquet Courts being a great live band, too, so I put them in my Songkick, hoped for the best, and snapped up the first tickets I could. Before the show, I did my due diligence and listened to Nude Beach and The Men. The former is a shockingly traditional band. Tom Petty is often mentioned, and he is definitely present, along with The Replacements and Stiff-era Elvis Costello. Their second album, II, is not bad at all, with some catchy tunes. The Men I initially found confusing as they've made some whiplash shifts, from wall-of-noise meta-punk on their earlier albums to the sometimes more pastoral sounds on their latest New Moon. The vocals are not very distinctive and I can't say I found any of it terribly convincing but I would at least be walking into Bowery Ballroom with some measure of what to expect - and with open ears. 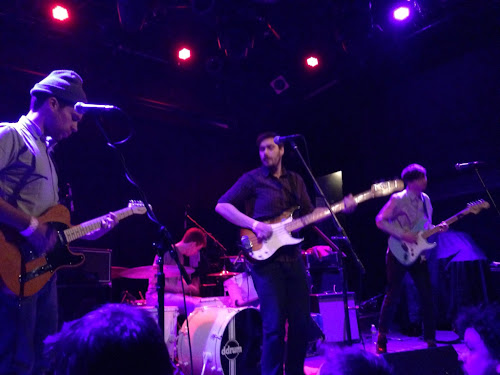 The show was sold out and, while the room didn't fill up for Parquet Courts, everyone who did get there early enough to see them was devoted. They set up without fuss, with singer/guitarist Andrew Savage and singer/guitarist Austin Brown flanking bassist Sam Yeaton, and drummer Max Savage at the back. The name of the band comes from Yeaton's hometown, where the Celtics play on parquet courts in the famous Boston Garden (who wants to call it TD Garden? Not me), and songs often began with his emphatic bass setting the tone. Andrew Savage is an expert at the Lou Reed single-string + controlled feedback solo and his sinewy lines were consistently engaging, while Brown mostly played chunky rhythm guitar. Max Savage is a great drummer and his attentiveness to his band mates allowed them to shift from one tempo to the next without hesitation.

They doled out the short songs expertly, often creating vertiginous portmanteaus of two songs with one ending on the upbeat and the next starting on the down. The way No Donuts collides with Yr No Stoner on Light Up Gold gives a good idea of what was a thrilling effect in an overall thrilling set. It was a spare 45 minutes, due to them being first on the bill, and could have perhaps used a touch of chaos. I plan to be there when they start headlining and (hopefully) pushing their music to the edge in a much more crowded room.

The three members of Nude Beach took the stage next - Chuck Betz on guitar, Ryan Naideau on bass, and Jimmy Shelton on drums. As promised by their album, they were tight and fun if maybe missing that one standout song and the indelible singing that could separate them from the pack. I found much to admire in Betz's guitar solos - each one told a concise little tale with a beginning, middle and end. I stayed for the whole set and wouldn't be surprised if more exciting stuff comes from them down the pike.

It was coming up on 11:00pm on a school night and I decided to leave it to The Men to convince me to stay later than advisable. I got my coat from the coat check and moved to the back of the room, which was now jammed to capacity. Anticipation was running high in the crowd and while I was not untouched by its contagion, I remained an outsider. The band eventually took the stage, minus their drummer, and started up one of their big noisy intros, with a sax wailing away in the mix. Eventually, the song proper kicked in when the drummer joined them and the audience went nuts. I remained unmoved and when one of the guys went into an ill-fitting amateur-hour monologue about Jimi Hendrix, I gave up and left. I am grateful to The Men for one thing: their utter mediocrity kept me from being severely sleep deprived for a very demanding schedule the next day.
Posted by Jeremy Shatan at 10:13 AM