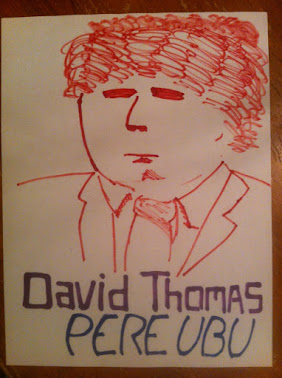 Although much of the world may have been unaware, Pere Ubu ruled 1978. They released their first two albums that year - The Modern Dance in January and, 34 years ago next week, Dub Housing, the astonishing follow up. They shared some characteristics with the Talking Heads, although they never had the improbable commercial success David Byrne and company enjoyed. Even so Pere Ubu have a firm place in the galaxy of what is often called post-punk and their first three albums are some of my favorite music ever. Here are some of the reasons why.

Named after the title character in Alfred Jarry's surrealist play, Ubu Roi, this band of avant garde misfits arose from the toxic industrial landscape of Cleveland, Ohio in the mid-70's. They didn't entirely reject the foundations of rock, but they warped them and folded them into their own twisted vision that included free jazz, dub reggae, musique concrete and lyrical preoccupations that were sometimes psychologically intense, and sometimes playful.

In addition to guitar, bass and drums (played by Tom Herman, Tim Wright and Scott Krauss), their line up included an EML modular synthesizer, played by Allen Ravenstine, one of the most original musicians of that or any era. Rather than use his electronic gear to imitate other instruments like horns or strings, he created purely electronic sounds which appear throughout the songs.


The drawing depicts David Thomas, lead singer of Pere Ubu, and one of the most courageous artists to enter a recording studio. Sometimes I think courage is the number one qualification for rock and roll. Think of the rogues gallery of outcasts and potential losers that have brought so much music into our lives. Where was the place for them before 1955? David Thomas was a hefty guy with a doughy face, exploding hair and a voice that was strangled, guttural and occasionally akin to that of Jackie Gleason's character Reginald Van Gleason III.

The music he and his compatriots came up with was often challenging at first listen but thrilling if you allowed yourself to buy in to what they were doing. I was well along for the ride when it struck me: this guy has GUTS. To put himself out there with no compromise, just as he is, take it or leave it - that takes courage. He was a riveting presence both on stage and record and had the band to match. While I haven't always gone along with all of his directions, either in Pere Ubu or solo, all these years later I still take inspiration from David Thomas's example. So give a listen to the opening cuts from those two landmark albums they released in 1978 and take a look at a wonderfully unhinged performance of a much later song. Maybe Pere Ubu will help you find courage when you need it.

Posted by Jeremy Shatan at 9:54 AM