The origins of all music lie in the body and the voice. Here are some remarkable recent releases that foreground the voice in various ways. 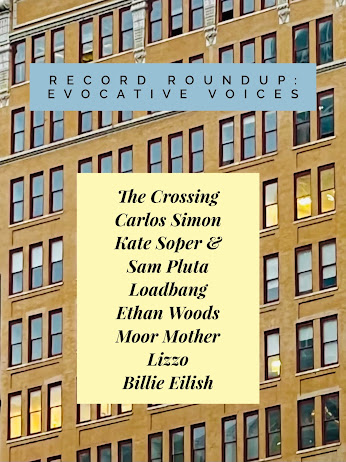 The Crossing - Born "So this is his mother. This small woman. The gray-eyed procreator." So begins Born, the arresting poem by Wislawa Szymborska that provides the text for the emotionally incisive piece (2017) by Michael Gilbertson that opens this album. Scored so it feels like the singers are feeling their way through the poem's universe and reacting in real time, it's a gorgeous tribute to the mother of conductor Donald Nally, whose sure hand guides the choir. Gilbertson's Returning (2021), which draws on Biblically-inspired text from Kai Hoffman-Krull, closes the collection in two parts of dynamic, searching music. In between those bookends is Edie Hill's Spectral Spirits (2019), 13 short movements meditating on extinct birds through the poetry of Holly J. Hughes and observations by Henry David Thoreau and other naturalists. Hill uses the words and occasional vocalise to create gently flowing phrases, interspersed with short solos announcing the naming of the lost animals. It's a gorgeous elegy and an original way to reflect on all the ways humankind has been unkind to the earth. Typically for an album by The Crossing, the recording and performances are impeccable.

Carlos Simon - Requiem For The Enslaved If a piece of music can be seen as a container for emotion, then Simon's extraordinarily powerful Requiem is near to bursting. Such is the weight of what he's conveying - "marking eternal rest" for the American slaves sold off in 1838 to keep Georgetown University afloat - that it would seem an impossibility for any work of art to encompass it. But Simon is both brave and skilled enough that he pulls it off in a way that should silence any argument about slavery's central role in the American legacy. The idiom he creates, drawing on musical colors associated both with the European classical tradition and the diaspora, including spirituals, hip hop, New Orleans jazz, and others, would become a morass for almost any other composer, but Simon moves his brush around the palette with dazzling ease and great depth of feeling.

While I hope this bold, at times shattering, work becomes a concert hall staple, it's going to be hard to match Simon's collaborators here, including rapper and spoken word artist Marco Pavé, who also wrote the text, trumpeter Jared "MK Zulu" Bailey, and Hub New Music, a quartet that sounds like an orchestra. Simon himself takes on the piano part, lending it the dynamic range and compelling flow of a great preacher, making it another voice in the piece. Another masterstroke is Simon's complete ownership of the 10-movement requiem structure, using the soul-nourishing force of ritual to his own ends. To be clear, however, while there is a healing force here, there is also deep sorrow and anger. Pavé's text ends with this blistering couplet: "Now when you read the word slave in your false history books...you will know the truth. The so-called masters unknowingly elevated the souls of their property while simultaneously building a tomb in hell for themselves." Amen.

Kate Soper Feat. Sam Pluta - The Understanding Of All Things On this fantastic and fantastical collection, Soper shoulders her way into a small but elite group that includes Scott Johnson and Laurie Anderson. Using her voice to convey content that is both informational and musical, all with a wry wit that seems to say, "Can you believe I'm getting away with this?" she takes us on a thrill ride grounded in her piano and Pluta's electronics. At times her voice is a ghost in the machine, getting pulled like taffy or chopped into bits, while never losing sight of the thoughts she wishes to explore. Pulling texts as wide-ranging as Kafka, Parmenides, and W.B. Yeats, to explore the meaning of existence, this is like hippest philosophy class - or Ted Talk - ever, and one you can play over and over again. To be honest, however, I wasn't feeling it much on my first go round. But then I listened to Season Two of the Miller Theatre's Mission Commission podcast, on which Soper is a featured composer, and something clicked. Whatever journey you take to find this, get started now. You don't want to be late for class.

Loadbang - Quiver This quartet puts baritone voice (Jeffrey Gavett) alongside trumpet (Andy Kozar),  trombone (William Lang), and bass clarinet (Carlos Cordeiro or Adrián Sandi) almost as if it were just another breath-powered instrument  - yet one that can outdo the others in flexibility and variety. As on their last album, which featured a string section, they unflappably take on whatever the pieces demand, whether it's the (mock?) solemnity of Gavett's own Quis Det Ut (2016), which takes inspiration from the renaissance, or the gasps and warbles of Heather Stebbins' fragmented title track (2014). Other pieces by Quinn Mason, Cordeiro, ZangYun WE, Kozar, and Chaya Czernowin, are more text-based, featuring poetry by Lydia Davis, William Blake, and others, in settings like you'e never heard before. Venture in and be as fearless in your listening as Loadbang was in the act of creation.

Ethan Woods - Burnout After 2019's Hyperion Drive, a sleek and sexy collaboration with Alice TM, Woods returns to similar realms as his earlier Mossing Around EP, applying his warm singing to  meandering melodies in chamber-folk arrangements of his most assured set of songs yet. Many of the lyrics address animals or are even from the point of view of the feathered and the furred, adding to the gently dissociative vibe that could be called psychedelic, but also reaches back to Lewis Carroll and Edward Lear. Woods' approach to song-craft is unique enough that it's easier to see it as a parallel path rather than tangential so when you get tired of our storyline, give a listen to his.

Moor Mother - Jazz Codes Though not obviously a concept album, there's a cinematic sweep to this latest from poet, professor, composer, and visual artist Camae Aweya that calls back to Barry Adamson's movie of the mind, Moss Side Story. While there is great musical variety here, with bright touches from Mary Lattimore's harp, Nicole Mitchell's flute, and other guests, the whole thing is slathered in a rhythmic juiciness, like a lost dream of the late, great Ras G. The vocal blend is top notch, with singers Orion Sun, Wolf Weston, Melanie Charles, and others lending their hearts and souls to the project alongside rappers including Yungmorpheus and Akai Solo. But dominion over all comes from Moor Mother herself: her composition, her intention, her spoken words, and even her sharp flow on Rap Jasm, the obvious single here. Her kaleidoscopic overview of the Black musical experience encompasses everyone from Woody Shaw to OutKast and Linton Kwesi Johnson. Her lyrics are impressionistic, revealing, and arising out of a depth of knowledge and feeling that power through any haziness due to their roots in the traditions of "great Black music, ancient to the future," as the Art Ensemble of Chicago put it. The song Evening gives us plenty of bread crumbs to follow, from "Free jazz lifestyle, yeah, I'm off the cuff," to "Spirits in the dark, let Nina sing, because it DON'T mean a thing/If it ain't got the blues." I mentioned a lot of names here, but the only one you should remember is Moor Mother's as she continues to astonish and become ever more crucial to the tenor of our times.

Lizzo - Special When her last album, Cuz I Love You, exploded in the sky over 2019, I worried about the influence success might have on her future work. But as she was just remaking pop, hip hop, and r&b in her own image, I was probably overthinking it. Either way, I'm overjoyed that her latest goes down so easy you might play it twice just to keep feeling so good. No song overstays its welcome and if Am I Ready causes a slight cringe with its Katy Perry-esque chorus, its still catchy as heck and goes by fast. Standouts are the pure disco of About Damn Time, the electro overshare of I Love You, Bitch, and the swinging folk-pop of If I Love You, but she plays to her strengths throughout for a fun, fizzy ride. And we all owe her thanks for the great opening lines of The Sign, an epitaph for a pandemic that is not quite over: "Hi, motherfucker, did you miss me?/I've been home since 2020/I've been twerkin' and making smoothies, it's called healing/And I feel better since you seen me last." So do I, now that I have Special in my life.

Billie Eilish - Guitar Songs While the death of the album has been an ongoing debate for a decade or more, it seems like singles are the things that can disappear more easily. So I'm pinning this here, like the beautiful butterfly it is. With Eilish in intimate, reflective mode, accompanied by her brother Finneas' delicate backing, these two songs show off her songwriting and singing in their purest form. The lyrics are deeply personal, with TV finding her alone on the couch after a breakup, asking "What's the point of anything?" and The 30th detailing the aftermath of a friend's terrifying car accident. But her sense of drama never leaves her and the way she finds comfort in a stadium audience near the end of TV, or the crescendo of The 30th ("You’re alive, you’re alive, you’re alive!"), are strokes of genius that nail the songs to your soul like the end of a Raymond Carver short story. Deceptively simple stuff and hopefully a signpost to her next album.