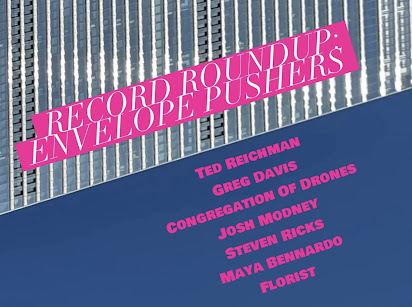 Here are seven albums that work on many levels, each one of them seeking to take their chosen form - whether chamber music, folk rock, or electronic music - somewhere new. Their ultimate success, however, is the shifts they cause within me, either displaying future vistas or calling back to early memories I'd nearly forgotten. What will they do for you?

Ted Reichman - Dread Sea The tale Reichman tells in the liner notes and in a poem contained in the Tripticks cassette's j-card, of encountering a "heavily drugged juvenile sloth" attempting to swipe him with a "long, slow arc of its claw," has a certain lysergic flavor that matches these multi-layered audio collages perfectly. Assembled from electronically treated mbira and accordion combined with prepared piano, synth, and tape, the resulting tracks come to your ears fully formed, as if created from one instrument. Of course, there is no requirement to think about aggressive sloths (I prefer the cute ones I see on Instagram!) while you listen. The music will most likely transport you to realms related to your own experiences. Take the journey.

Greg Davis - New Primes As a recovering arithmophobe, reading that prime numbers form the basis of Davis's new album on Greyfade is enough for me to tune out to avoid past anxieties. But that stuff is all behind the scenes. You don't need to know that Davis is using "custom-written software to translate prime number sequences" into music, using only sine tones as his medium, to listen and respond to the sounds contained herein. And while all that sounds super-cerebral, there is definitely an emotional reaction to have to these throbs and drones as they rise and fall, thicken and attenuate. I can't help being taken into an alien space of almost pure loneliness, as if engaged in a space-walk between ships, hungry for the noise, clatter, and melodiousness of human existence. But I can just as equally let the hum of an air conditioner, laboriously beating back the heat, blend with Davis's music as I zone out to the play of leaves and sunlight just outside my window. My mind drifts, imagining the activities of tiny animals for whom a blade of grass might constitute their entire universe. Davis is surely on to something here, and you don't need to know any math for it to grab you.

Congregation Of Drones - Twenty Twenty That artists have their antennae up is well known, so the idea that violinist/composer Pauline Kim Harris and electronic musician Jesse Stiles came together to record the first two foreboding tracks here in February 2020, just days before COVID lockdown, makes perfect sense. After an interruption of some months, they reconvened virtually and continued the project. When complete, they named each track after a headline in the New York Times from the day it was recorded: Gesture Of Devotion, See What Happens, Experimental Treatment, and No Spinning. With that background, it is also no surprise that these richly evocative tracks could make for an excellent soundtrack for reflecting upon what we’ve all been through for last two - now almost three - years.

But Twenty Twenty is so much more than a mirror to the past. This is stunning, nail-you-to-your-chair music, with Harris’ extraordinarily versatile sound-making abilities - from long, arcing lines to percussion, pizzicato, and beyond - fully matched and intertwined with Stiles’ starlit and multi-hued electronics. While some of it is spaced out and slow, it never lets up in intensity, occasionally exploding into segments that are near metallic. This landmark in electro-acoustic music is also available on vinyl, which should be a fantastic experience, although I do like losing myself in the full 71-minute sweep without having to change sides. I urge you to get to Twenty Twenty STAT, through whatever medium you prefer, and let it mold itself to your life.

Josh Modney - Near To Each I think I might have just found David Bowie's next band and it's a goddamned pity he's not around to take advantage. But knowing how Blackstar's collaboration with Danny McCaslin and Co. turned out, get your mind around Bowie working with Modney, a brilliant violinist here making his debut as a composer, Ingrid Laubrock, a saxophonist equally at home in jazz and new music, Cory Smythe, the genius pianist with the International Contemporary Ensemble, and Mariel Roberts, a fearless virtuoso cellist whose last album was a series of brutal improvisations. And they really play like a band, too, with Modney tailoring the compositions to each player's unique style and engaging in deep collaborations to arrive at the final product.

The results are a series of gripping dynamic pieces of chamber music that incorporate drones, spiky duels between instruments, pounding ensemble work, and moments of crystalline beauty. Near To Each opens with a solo violin piece that casts back to Engage, Modney's triple-album from 2018, which included a series of improvised solos, but other than Tenor Solo for Laubrock, the rest is all about interaction, juxtaposition, and overlap. The pieces also take you through a series of emotional states, from angst to contemplation, and how you relate those to your own life will be very personal. A couple of my favorite passages in Whalefall and Crystallization I bring to life that sensation of lying back on grass on a hot summer's day, only to have the whine of a small airplane cross the sky - and your consciousness. It's a lonely, restless sound that brings the vastness of our planet into dramatic focus.

Ballad contains yearning interplay, with Smythe's measured chords reminiscent of Messiaen's Quartet For The End Of Time, his custom software subtly enhancing the sound world. The last piece, Chorale, is a 23-minute tour-de-force and the track that put Bowie dreams in my head. Opening with Roberts' violent cello intertwining with Modney's squirrelly violin, the work gradually develops a narrative flow as searching piano from Smythe transitions it to a different mood. While Chorale doesn't echo anything specific from Bowie's world, it rhymes very nicely not only with Blackstar but the exploratory sides of Low and "Heroes" in the way it works with unexpected sounds and structures to create something as grabby as an avant garde pop song. I can imagine an adventurous listener and creator like Bowie being jazzed by this piece and the others, becoming eager to get involved. I know I am!

Steven Ricks - Assemblage Chamber Rather than questing into the future, Ricks bravely spelunks into the Baroque, pulling out modes and methods (and the occasional harpsichord, played by Jason Hardink) to inform his own bricolage approach. This gives the three acoustic pieces here a wonderful off-kilter feeling as past and present collide in lighthearted and inventive ways. The addition of guitar (Dan Lippell) and bass clarinet (Benjamin Fingland) creates ever more delightful anachronisms in Reconstructing The Lost Improvisations of Aldo Pilestri, while the title track eliminates instruments altogether, with Ricks cutting and pasting bits and pieces of the earlier works into a sound collage that both sums everything up and points in new directions. With great playing by members of Counter)Induction and the NOVA Chamber Music Players, among others, this is a satisfying feast of a collection suitable for gourmands of many genres.

Maya Bennardo - Four Strings Bennardo is one half of the redoubtable duo AndPlay, a core member of the Mivos Quartet, and has played on countless great records in recent years. Here, she finally steps out on her own and the results are captivating. Consisting of two long works for solo violin, Four Strings not only allows Bennardo to pursue her interests in stasis and simplicity, but premieres two important pieces by composers demanding wider attention. The first, Kristofer Svensson’s Duk med broderi och bordets kant, has a folk-like simplicity, with a repeating motif and overall warmth that will call you back home, wherever you're from. The title piece by Wandelweiser composer Eva-Maria Houben is a spacious meditation on individual tones and notes, like pick-up sticks where none of the sticks are touching. Bennardo's concentration and the care she gives every draw of the bow shine brightly here, making a nice contrast to Svensson's more gregarious work. Bennardo can do no wrong, apparently, and I will be glad to follow her to more fantastic music in the future. P.S. She and her AndPlay partner Hannah Levinson publish one of the best newsletters in the biz - in fact, it was they who led me to Twenty Twenty! Subscribe here.

Florist - Florist The permission granted by The Beatles on the so-called White Album to fill a double album with a wide variety of styles and approaches is often more of a curse than a blessing. See under: Sandinista by The Clash or that new goulash by Big Thief, which has some very good songs but makes you work to find them. Not so with Florist, sometimes the solo project of Emily Sprague, but presented here as a full band. Drawing together all of the threads cast out by a decade's worth of Florist releases, as well as those under Sprague's own name, Florist presents everything these musicians can do at the pinnacle of artistic success. From the gleaming chamber-folk perfection of a song like Red Bird No. 2 to the sketches like Duet For Guitar And Rain, the parts assemble into a whole that envelops and inspires. The use of field recordings or ambient sounds of nature only enhances that sense of environment, as if you've turned on one of those old lights with a paper cylinder that sends stars rotating around your room.

Like the sounds in the background, the lyrics are filled with references to nature, relating the night sky, fireflies, breezes, and so on, to various inner states. The results are pure poetry, as in these lines from Spring In Hours: "oh, the light inside you now oh, the wild inside you now/maybe there’s something that takes us beyond this/and flowers like spring in our arms." Among the shorter songs and fragments are several longer tracks that really show off the interplay between Sprague (vocals, guitars, synth), Jonnie Baker (guitars, synths, sampling, bowed guitars & bass, saxophone, vocals) Rick Spataro (bass, vocals, engineering, piano, synths), and Felix Walworth (percussion, vocals, synths, guitar), like 43, which extends into a jam reminiscent of Jonathan Wilson circa Gentle Spirit. And those player credits are a hint of what Florist means when they call themselves a "friendship project," also pointing out their gently radical reimagining of what a band can be when you break down silos between the individual roles in the group.

Whatever path Florist took, they arrived at a very special place and have given us a masterpiece of an album. I'm slightly despairing at the play counts on Spotify, which suggest people are picking and choosing between the songs.I strongly suggest that, if listening digitally, you entrust yourself to this whole album. I believe you'll find yourself richer for the experience.