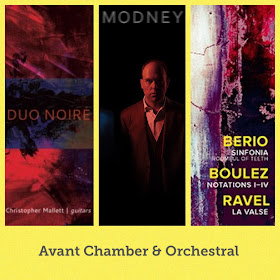 These recent albums all celebrate the vitality of old instruments and even musical forms and the way they are constantly renewed through adventurous composers and novel approaches.

Duo Noire - Night Triptych This brilliant album is a sparkling rejoinder to all who would respond to calls to diversify classical music with an “Of course - but quality is all that really matters!” So, here you have two African-American guitarists - the first two to ever graduate from Yale - playing music commissioned by them from female composers. Duo Noire checks so many boxes here that they’re almost in competition with Sacha Baron Cohen’s new character, that dolphin-loving liberal Dr. Nira Cain N’Degeocello, who takes PC to new heights of absurdity.

In a way the fictional interlocutor invoked above is right - quality IS all that matters. But good work is also where you find it and nothing will change in classical music unless people make the same kind of effort Thomas Flippin and Christopher Mallett have made here. They’ve obviously done their homework, tapping an international array of young composers (none were born before 1978) to expand the repertoire for two guitars in marvelous ways. Often using extended techniques and electronics, the works both transcend and exemplify the characteristics of the instruments. A perfect example is Byblos by Mary Kouyoumdjian, the second work here, which puts the guitars against a starlit electronic backdrop, allowing their tense arpeggios and riffs to bloom and almost become pure sound rather than the familiar acoustic textures. It should go without saying that this wouldn’t work without the Duo’s phenomenal technique.

The title piece, a three-part invention by Iranian-born Golfam Khayam, draws both on her Persian heritage and her interest in sound-art to arrive at a place of beauty that feels totally natural. Works by Clarice Assad, Courtney Bryan, Gity Razaz, and Gabriella Smith fill out the collection, which is a delight throughout. When ideology intersects with music it only advances the cause of both when the results are as compulsively listenable as what Duo Noire has put forth on Night Triptych. The album, out now on New Focus Recordings, is a complete success on all counts and if you are moved to seek out more music by the composers involved, further rewards will follow.

Joshua Modney - Engage Modney’s activities in the Mivos Quartet, Wet Ink Ensemble and the International Contemporary Ensemble have kept him busy enough that he can be forgiven for taking this long to release his solo debut, which comes out August 3rd. All that group work seems to have resulted in a build up of both ambition and ideas as, like George Harrison with All Things Must Pass after The Beatles, Modney has given us a triple album. Fortunately, his conceptual abilities equal his playing skills as each program stands alone as a satisfying and adventurous listening experience.

Disc one’s four pieces cover a lot of ground. Sam Pluta’s Jem Altieri with a Ring Modulator Circuit (2011) finds common sonic ground between live electronics and the violin at its most squirrelly and scratchy. Like Michael Nicolas’s extraordinary Transitions did for the cello, Pluta’s piece will have you instantly contemplating the violin itself as a piece of technology. As a statement of purpose it couldn’t be more perfect and following it up with Taylor Brook’s Vocalise (2009) was a stroke of genius. Brook took inspiration from Hindustani music and occasionally approaches a sort of desert romanticism that takes advantage of the violin’s liquid tones. Kate Soper’s Cipher (2011) finds Modney and the soprano in pure symbiosis over its four movements, creating a new form of art song. Anthony Braxton’s #222, one of his Ghost Trance Music pieces from 1998, finishes out the set and it’s a woozy delight.

Bach’s Ciaccona (1720) leads off the second disc in an arrangement by Modney in Just Intonation (JI), which is a more modern conception of tuning than what the composer used. I can imagine Bach being intrigued by some of the theories behind JI but for the listener any intellectual underpinning becomes less relevant once you press play. To my ears, the JI takes away some of the Baroque harmonic mystery, leaving behind a stringent view of the labyrinthine structure and melodic invention. Modney’s technique is as flawless here as in the modern works. Eric Wubbles’s “the children of fire come looking for fire” (2012) features the composer on prepared piano in a 25-minute tour de force of texture and rhythmic drive. It’s another example of how Modney’s direct engagement with composers can bear fascinating fruit.

Also just like All Things Must Pass, Engage ends with a series of jams in Modney’s own Violin Solos (2017), improvisations which feature the instrument unfettered by electronics or post-production. The five pieces are a remarkable acknowledgement of the endless adaptability and possibility of the violin, with the sounds of today’s world uncannily reflected back by this antique construction of wood, horsehair and gut. Modney has made a commanding statement with Engage and is now, in addition to all his other roles, a solo force to be reckoned with. Engage is also out now on New Focus.

Seattle Symphony - Berio-Boulez-Ravel My admiration for this ensemble and its conductor Ludovic Morlot was solidified by their definitive premiere recording of John Luther Adams’s Become Ocean in 2014. Even so, I can’t be 100 percent sure I’ve kept up with all their recordings since, which is a shame, since this well-conceived and brilliantly executed collection is another reminder that my admiration was in no way misplaced.

Linking the three 20th Century classics included here is the idea that each composer drew on other, older material to which to apply their transformative art. In the case of Luciano Berio’s Sinfonia (1968-69), he pulls in texts from a wide array of sources including Claude Lévi-Strauss and Samuel Beckett and musical themes from Debussy, Beethoven, and especially Mahler’s Second Symphony. The second of the five movements, O King, was composed in memory of Martin Luther King, Jr. and uses only parts of his name, sung mostly sotto voce, in an emotionally piercing tribute. The live recording is wonderfully dynamic, with rich, detailed sonics and a perfect balance between the orchestra and the eight voices of Roomful Of Teeth. The inclusion of the latter ensemble is a coup as it is doubtful that any other modern vocal group could better their work here. This version more than holds its own against others, including the debut recording (of the four-movement version) by the New York Philharmonic with the Swingle Singers conducted by the composer.

Pierre Boulez’s Notations (1978) is next, and, in typical fashion, the scraps for this quilt come from his own work, specifically a piano piece from 1945, also called Notations. In theory, Boulez allows the performers to pick the order of the four movements but, because he is SO not John Cage, suggests the order used here, sequenced for “maximum contrast.” He’s got a point, but however you listen, each movement is a celebration of orchestral color and texture, full of pulse-pounding rhythms and flashes of melodic sparkle. Morlot and the Seattle players sound fully engaged and make a strong case for the piece, of which many recordings, including Daniel Barenboim's under Boulez’s supervision, are sadly out of print.

Maurice Ravel’s La Valse (1920) is also played to a fare-thee-well but cannot escape feeling like a warhorse to these ears. Maybe I just have a block where Ravel is concerned, but if you feel differently you’ll have no issues with this version. A piece by Messiaen would have been my dream pairing for this record; as it stands, the album is just shy of perfection.

Tracks from the albums reviewed here can be found in this playlist, along with a wealth of other "classical and composed" sounds from 2018.

You may also enjoy:
Record Roundup: Electro-Acoustic Explorations
Best Of 2017: Classical
Record Roundup: On The Cutting Edge
The Inspired Viola Of Melia Watras
Immersed In Become Ocean
Multiplicities Of Genius, Part One
Jeremy Shatan at 2:28 PM