Concert Review: JACK In The Crypt 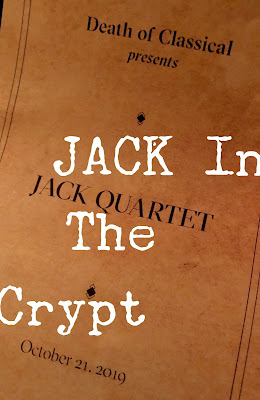 “It’s kind of spooky - but fun!” said a woman to her friend as we took our seats in The Crypt of the Church of the Intercession, beneath the streets of Hamilton Heights. I found it a suitably contemplative space for a concert of music by John Luther Adams but could see her point, with the candles flickering and the memory of having passed a shadowy graveyard on the way from the wine and cheese reception to the performance space.


We were there for another entry in The Crypt Sessions, a series produced by Death Of Classical, which is the brainchild of Andrew Ousley, a voluble impresario who invited us take advantage of the intimate setting to seek communion with the music, with ourselves, and with our fellow audience members. He also mentioned what a treat it was to have the JACK Quartet perform in such a context and I couldn’t agree more - the group’s sense of adventure is only matched by their sheer excellence of technique. And as this is the second time I saw them in a brief span of time, I can happily report that they are as tight and communicative as they were before their lineup changed a few years ago.

The first work they played, The Wind In High Places, is one with which I am intimately familiar from their 2015 recording, part of a beautiful album of the same name focusing on music by Adams. But right from the opening of the first movement, a four-note phrase of high harmonic notes, I sensed a greater shapeliness to the performance. It was a feeling that remained throughout that wispy first movement and into the second, an extraordinary combination of tinkling glass chimes and bird calls. As these sounds were all made by the two violins, viola, and cello, this could be considered synthetic music of the highest order. The music took shape in the air, aided immeasurably by the warm acoustic of the environment. The third movement inspired me to jot down the phrase “radical consonance” in my notes, so strong and rich was the sense of harmony among the instruments. Structurally speaking, that third movement, and the piece as a whole, felt as solid as the Gothic arches by which we were surrounded.

After rapturous applause, the four men got to work on Adams’s String Quartet No. 5, Lines Made By Walking. This was the New York premiere of the piece, which was first played this past August in Fishtail, Montana at Tippet Rise. Death Of Classical didn’t print the movement names or numbers on their minimalist program, but I wondered from the start if Adams would once again use the three-part format that seemed so right in the previous piece. A brief introduction from JACK violinist Austin Wullman let us know that Adams was inspired to create a “sculpture” in sound based on long walks in Wyoming.

The first movement - which, I learned later, is called Up The Mountain - had a sense of constant ascension with repeating melodic loops seeming to move ever upward. The content of those melodies also struck me as quintessentially American, as if the essence of Aaron Copland was extracted and distilled into an ambient Americana. There was a crescendo of sorts to end the first movement, a bit of a magic trick showing how minimal gestures can create drama. The second movement (Along The Ridges) was elegiac and almost lush. Time felt suspended along its long threads even as it retained a sense of slow forward motion. Down The Mountain, movement three, was just that: "Descent," as I wrote in my notes. It followed a similar architecture as the first movement, including the quickening, almost-crescendo at the end, with lots of eye contact between the players as they brought this new piece home.

There was a brief pause and then a long, generous and well-deserved ovation. I looked at my watch and it was barely 9:00 PM, a nice bonus on a Monday night. On the way out, I chatted briefly with Wullman and asked him if the greater comfort with The Wind In High Places was a result of having played it many times or just my own impression. He agreed that playing it often had made it more their own, but also put the difference down to “not being under the microscope” of the recording studio.

While I certainly hope the JACK records this new Adams piece ASAP, that’s as good an argument for attending the Crypt Sessions as any: hearing our finest musicians playing excellent music in an environment that evinces their greatest sense of comfort. In short, it’s a special occasion. The word is out, however, and shows sell out almost instantaneously. So subscribe to the newsletter and be prepared to jump when they announce their next concerts!