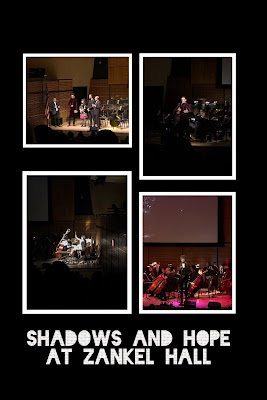 Programming a concert has many challenges. First of all, it’s commonplace for it to be at least two hours of music, which gives the audience their money’s worth but requires much preparation. If you’re presenting a new piece, that might eat up a disproportionate amount of your rehearsal time. Playing an unfamiliar work might also lead you to want to give the audience some comfort food, in the forms of a warhorse or other frequently performed piece. Fortunately, the American Composers Orchestra did not fall into that trap last Thursday, when they played in Zankel Hall as part of Carnegie Hall’s massive and ambitious festival, Migrations: The Making Of America. But they did struggle a bit to connect works that were musically disparate and resonated with each other only on a strictly cerebral level. But that was the only issue I had with the concert, which was played both immaculately and with a generosity of feeling.

The first piece was Morton Feldman’s Turfan Fragments (1980) which was inspired by bits of 1,500-year-old knotted carpet from Turkestan and, as such, was designed to be a series of unresolved parts. For a first hearing of this slippery work I was immediately struck by how resolute it was in its very irresolute-ness, as if Feldman was determined that it not come together in a way we expect from an orchestral piece. There were many sonic delights within, however, like the pizzicato section that came about five minutes in. And there may have been no harder working man in New York that night than conductor George Manahan, whose precise baton movements hinted at the challenge Feldman designed for those who dare to assay these “fragments” - a challenge more than met by him and the ACO.

Next we were treated to a some brief remarks from Gloria Coates, describing how her Symphony No. 1, “Music on Open Strings,” took shape between 1971, when it was commissioned by the Rhinelander Chamber Orchestra, and 1974, when it was completed. She wasn’t able to finish her whole tale of artistic discovery, and it is a gripping story, but it was also well-told by her in the program notes. Coates, who turned 80 last year, was born in Wisconsin but traveled from her home in Germany to witness her piece’s Carnegie Hall debut. It was also my introduction to her work, as she has been in the “I know the name but that’s all” category for some time. Now I'm kicking myself because I know what I've been missing!

I was quickly sucked into the unique sound world she creates, with bows swooping and gliding across strings and sometimes tapping them. Knuckles were also knocked against wood for dramatic effect, just one reason I was on the edge of my seat. Part of the work’s distinctive quality comes from Coates’s idea to have the players re-tune their instruments periodically throughout, which was a great opportunity for the ACO and Manahan to show how well they communicate. A nod of the head from one of the bassists toward the podium was all the conductor needed to know that the musician was ready. Ultimately, the brooding intensity of the piece, which reminded me of Shostakovich at times, was more important than the mechanics of how Coates got there. I’m looking forward to learning more about her catalogue and hope we don’t have to wait for her centenary for it to be celebrated and highlighted in the musical life of NYC.

Instead of an intermission, there was a panel discussion featuring the collaborators who created the evening’s main event, the New York premiere of Where We Lost Our Shadows (2019). Composer Du Yun was joined by filmmaker Khaled Jarrar, ACO Artistic Director Derek Bermel, and vocalist Ali Sethi. Du Yun talked about how she crafted the work with these specific soloists in mind, instead of casting them later. Having already decided that ragas would be incorporated into the piece, Sethi became a real asset as he guided her through 800 years of music from the Indus region. Sethi also demonstrated some of the basic Qawwali forms he would be using, giving the audience a sneak preview of his wondrous voice. Jarrar described his way of embedding himself with immigrant communities, gaining their trust and getting a view of the extremes of their experiences. Author Didier Fassin, whose book, Life: A Critical User's Manual, informed some of the thinking behind the piece, was also on hand to offer some sobering facts about migrant mortality: It has been on the rise worldwide for decades and many deaths go uncounted with even the names of the dead unknown or unrecorded.

According to the program notes, “Where We Lost Our Shadows is a piece for orchestra, video, and soloists that focuses on human migration as a question of perpetual movement and exodus that repeats throughout history, passing on collective and individual traumas and rejuvenations from generation to generation.” That measured explanation barely hinted at the deeply emotional combination of sound and vision that transpired over the half hour of the piece, which literally started with a BANG, struck by percussionist Shayna Dunkelman on an enormous side drum. I know Dunkelman as a member of avant-rock band Xiu Xiu but was unaware of the breadth of her musicianship, which became stunningly apparent during the heart-stopping solo that began the work.

When the orchestra came in, accompanied by what I believe was an electronic tanpura (Sethi seemed to be holding one during the panel discussion), it was almost a relief from the tension built up by the drums. Sethi began singing in his rich, slightly husky voice, seeming to craft his ancient melodies out of the air with his hand gestures. There was a chaotic darkness on the screen, which eventually gave way to an interview on the streets of Turkey with a family overjoyed because they had just gotten their authorization to travel to Europe, where they would find a new home after leaving Syria. They kept smiling even when saying they had been living in the streets while waiting for their papers. Their sweet, shining faces stood as a testament to the indomitable human spirit - and an indictment of what people do to other people.


Helga Davis, the third soloist and an incredible singer and performer, then stood up and unleashed all the pain and sorrow that lay behind those smiles. There was another percussion interlude, even more intricate than the first, and further explorations of Qawwali, leading to a stunning duet between Sethi and Davis. Just as there are no easy answers to the refugee crisis, ...Shadows ended without a sense of closure - it just stopped. The audience caught their breath and then stood for a generous standing ovation. While it’s hard to be entirely sure based on one performance, I feel fairly certain that the music, in which I sensed a new level gravitas for Du Yun, will more than hold its own without the visuals. I urge the powers that be to record it as soon as possible!

You may also enjoy:
Focus On: Contemporary Classical
Three Portraits: Cheung-Trapani-Du Yun
Mata's Bad Romance At The Kitchen
Jeremy Shatan at 10:51 AM